I use the recorder extensively. I then have been using Audacity to split out the tracks into stems that are later brought into my DAW.

So, my first question is whether there is a better tool than Audacity for performing this task.

BTW - a couple comments for newcomers to using Cantabile as a recorder:

Cantabile creates a composite file with all the channels contained within this single composite file. That is why I need to split it into stems.

It saves to either .wav if the composite file is up-to 4 GB in size, and as .w64 (or Wav64) if over 4 GB, which mine usually are possessing typically 6 or more stereo tracks. From https://fileinfo.com/extension/w64 :

"The W64 format was designed to surpass the 4 GB limitation of Microsoft’s 32-bit RIFF/WAV specification. W64 files are 64-bit and allow for file sizes greater than 4 GB. This enables audio files to have a much longer duration.

NOTE: The Wave64 format was developed by Sonic Foundry but now is maintained by Sony. The official name of the format is “Sony Picture Digital Wave 64.”

You can create dummy channels for your VSTi’s and effects to be sent to by simply making output channels in the Audio Ports section in Options without needing to assign them to anything - they will appear in the Recording channel selectors, and putting a checked box beside those will include them in your recording.

Be careful of your levels - I’m not 100% certain of this, but it seems that these recordings are pre-fader and pre-effects. That is, they are the raw input of the instrument, microphone or VSTi as it comes in. So, watch your levels, as Cantabile’s faders, built-in limiter, or other effects do not seem to be applied here - it is capturing the raw input without limiting. (For the first several attempts I constantly was overloading the inputs for these tracks, even though everything was copacetic during the show for the master outs. If you are recording at 24-bit or higher, you can under-feed these inputs quite a lot (like -15db) and still have all your dynamic range faithfully captured.)

Many DAWs will have nothing to do with the .w64 files and will not load/import them, and even Sony’s Sound Forge (which it was designed for) is difficult to work with for me, but I’m not used to Sound Forge yet as regards using it for multi-track. Audacity works flawlessly, allows you to remove empty tracks and convert the mono-pairs into stereo tracks. The only issue is what I explained above as regards being stuck with 16-bit or 32-bit float output.

I’ve tried and failed trying to directly import .w64 files with Digital Performer, Samplitude and Harrison Mixbus. Perhaps other DAWs will, but I do not own those.

Also, see this post for how to play back the multi-channel recordings into a stereo output using the Cantabile media player:

So, my first question is whether there is a better tool than Audacity for performing this task.

@Torsten made one as I recall you could run a search or inquire to him.

Oh, yes - the SOX item. I have to take a look at that again - at the time I was not doing a lot of Cantabile recording and never tested it.

Multitrack recordings during rehearsal - how to quickly play them back?

There may actually be one. If Cantabile is saving audio as multi-channel wave files, there is an easy drag-and-drop way to quickly extract the two relevant channels as a stereo file. I built another little utility some time ago to help me handle the multi-channel wave files my DL32R mixer creates when recording rehearsals. Since they are a mix of stereo and mono channels, simply extracting all individual channels is not much use to me, so I built a front-end for the tool SOX to de-multiplex mul…

Unfortunately, Torsten’s utility only works on .wav files, and I primarily have wave64 files (.w64), which have a different header.

Timely subject, I’m going to have need of this in the next couple weeks (recording practices with and without a guide track).

Oh, I forgot that, it worked great on .wav files though, oh well I’ll keep an eye out for a solution. Also, for extra info for all, if using C3 you can switch to .wav or .x64. 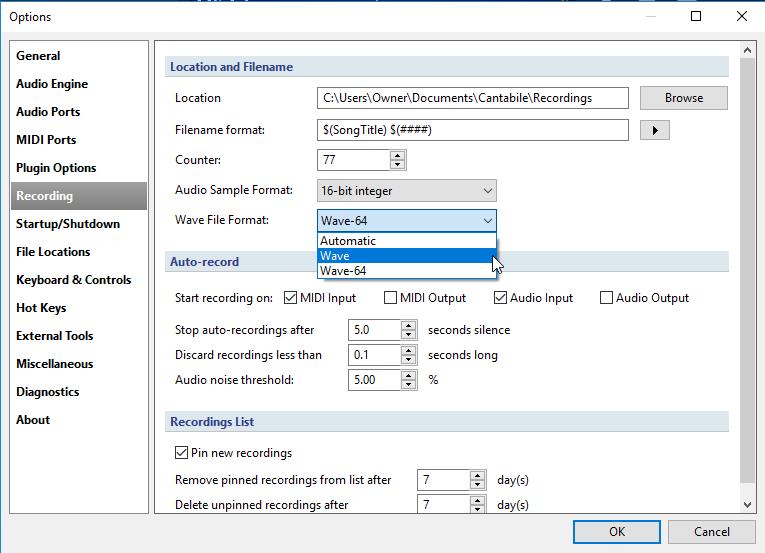 EDIT - Answered my own question:

The WAV format is limited to files that are less than 4 GiB, because of its use of a 32-bit unsigned integer to record the file size header. Although this is equivalent to about 6.8 hours of CD-quality audio (44.1 kHz, 16-bit stereo), it is sometimes necessary to exceed this limit, especially when greater sampling rates, bit resolutions or channel count are required. The W64 format was therefore created for use in Sound Forge. Its 64-bit header allows for much longer recording times. The RF64 for...

You got my investigative juices flowing on this generic w64 demux/split/convert for Cantabile and I have found a promising home grown batch file conversion solution if you’re interested in the setup, once setup is done things really speed up from my experiments today vs doing each file one at a time in audacity.

Ok, good, I’m working on the batch file but need some info from you. The decoder/splitter I’m using needs to know the number of channels in the file before executing the splits and file writes, if it doesn’t have that right it will write 0 size files

So off hand do you use the same number of channels in your W64 files and if so how many do you use in your “channel layout” ? I can get you going without the fancy interface if you can stand a Command window for the input and then poof the files appear after being split. Given time I can see it getting put in a better wrapper … lol:grin:

Unfortunately, Torsten’s utility only works on .wav files, and I primarily have wave64 files (.w64), which have a different header.

I’ve tried it with a quick experimental w64 audio file from Cantabile - seemed to demux it all right. Can you see if it works for you? 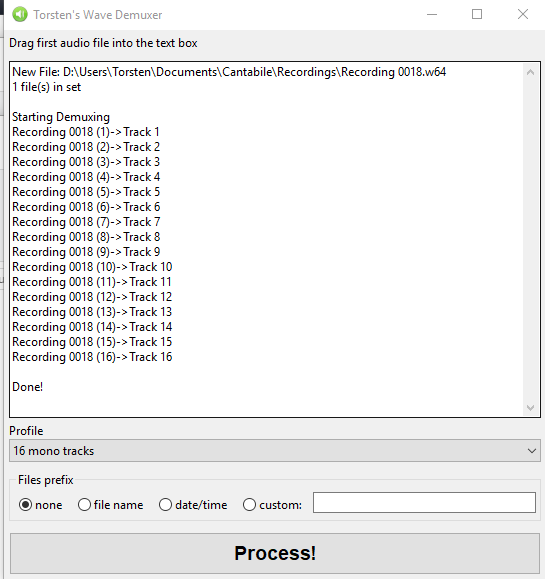 1 Like
Cantabile doubling as a multitrack recorder while playing VST's live with Behringer X18 mixer
Something weird about how Cantabile records audio files and therefore I can't edit them in Cubase
terrybritton January 15, 2018, 11:47pm #13

I usually have two mics, four or five hardware synths and five VST’s being captured, and sometimes the old LXP-5 comes into play.

Honestly, the nice thing about sticking with Audacity is that I can make the mono L+R tracks into stereo ones where applicable, and give the tracks names before exporting the stems. I can see whether there actually is anything recorded also (in the case where I checked more items than actually produced sound).

However - I also have the three-channel layout I use every Friday (composite, piano, reverb VST). We could start by experimenting with that one!

What’s a tiny bit tricky is remembering which of my checked items were stereo and which were mono, but that is certainly no big huge deal to keep track of.

Only four mono items anyway - two mics, the TX81Z and the ESQm. I think I can keep up with that!!!

I saw @Torsten posted about his new updated Audio Demuxer, you should try it out first and let me know how it goes. I liked his first one.

I took the liberty of trying out the new version of Audio Demuxer after updating Sox and it gave me a group of errors on a 16 channel w64 file I use for testing that was created by Cantabile. Here’s a screen shot that covers as much as possible in one screen. App reports process undertaken, error box shows errors on all 16 channels with the small box as an example of all the others and no files are created or written. Hope this adds to development. 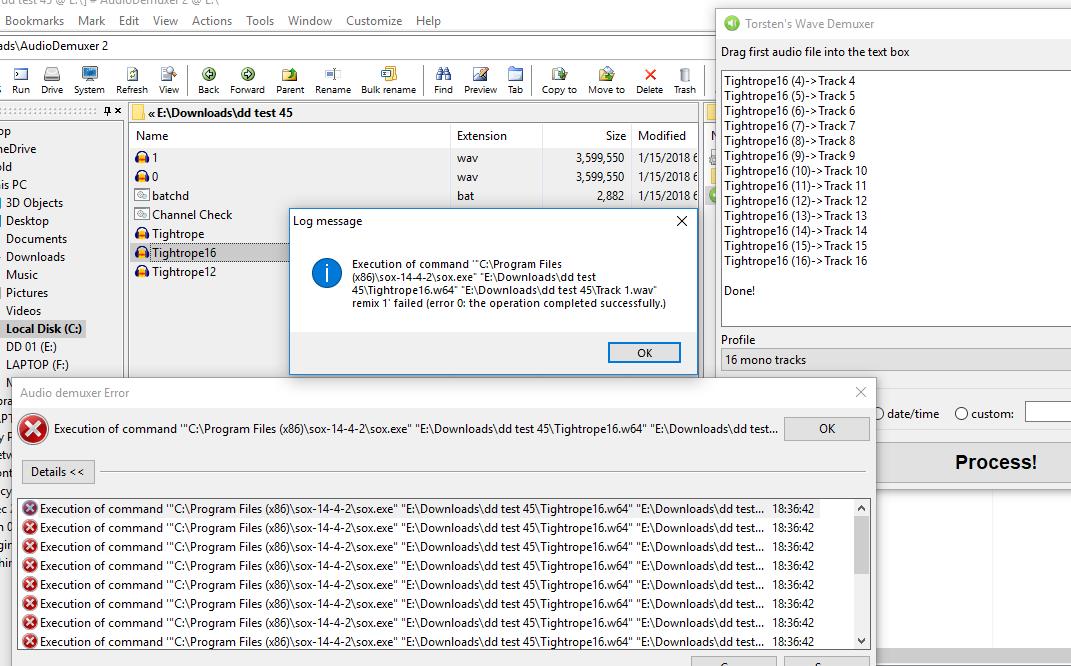 Thanks @Torsten I will try it after correcting the version.

I made the sox adjustment and now it’s working fine here on Win10. I must make some custom profiles now! I have a working DOS line version I made with ffmpeg that is solid but not nearly as elegant. Thanks so much for the update!

Terry, I actually moved over to recording all channels dry and directly in Reaper. But using c3 to send song changes to reaper so that tracks all end up nicely named and all I have to do is a final mix and crop and render.

I can also play back the track during rehearsal instantly from reaper with no other processing. I can also either play it back through the reaper mixer and fx, or send the tracks back through the live mixer so we can hear exactly what it sounded like though foh.

I can describe in more detail if anyone is interested.