Yup, I’ll be doing a 30-minute streamed live improv from the studio here, using Cantabile for the whole show (and MIDI Designer as my controller).

I’ve spent quite a bit of time setting up a flexible rig, with some rhythm backing I can kick in and out as I go. It’s quite a tour de force of Cantabile’s abilities!

Thanks so much Paul for the invite. I like the site! I will look in on Saturday. If I may ask do you have to have a fairly robust upload stream rate to do this? I suffer in that respect so any knowledge would be welcome.

Great Paul…but what 9PM time zone am I shooting for?

I have 200mbps download here (don’t know speed of upload), but what speeds the streaming service has I don’t know. I just stream to them and they do the rest.

Toadstool ready and armed. Cantabile is making all this possible! 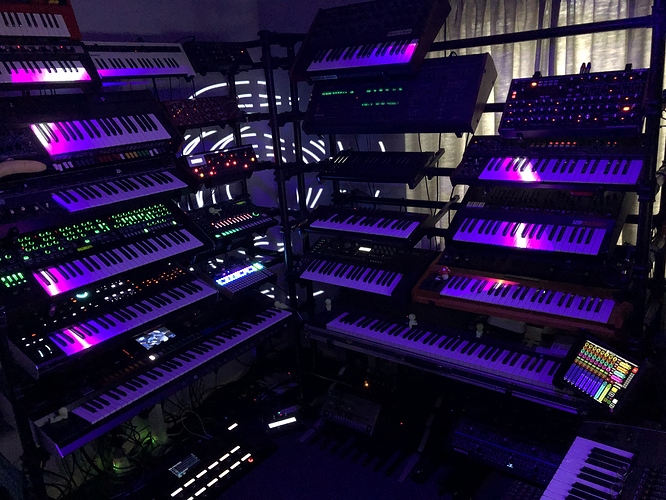 I am enjoying what I ear, though in bits and pieces.

Update: after about 20 minutes, stuttering ended!

Tried to join but only have an ipad available here and no clue this ain‘t work😭
Nevertheless: hope have a good show and much fun and see you next time.

I have not been able to connect from the linked page. I had to go to youtube and select the live steam in the upper right of the page…not sure if this is your problem, though.

Looks like there were a lot of technical problems. Shame. The tech check went perfectly, so I should have guessed!

Thanks mate, that did the trick

Of course 30 minutes too late but no problem as everything is recorded. Sounds sweet (only fragmentation is annoying of course)

Had the same fragmenting here as well so it wasn’t my connection I now think, but I truly enjoyed the content! The analog synth tones are stellar

Hi Paul, just finished to listen. Second part was unfragmented and a pleasure to listen. Really nice sounds with memories of the 70ies and 80ies came up (in a good way).

Organ part in the second half was nice (what did you use?) and unexpected and reminded me of Bo Hansson in a way (but more perfect soundwise).

Even though it‘s not exactly the music I do it was great fun to be invited (and forget about the technical niggles - this can happen and obviously was neither initiated by you nor cantabile: both of you did a great job

Btw: your mockup is really impressive

only remember Geoff Downes having anything similar in the 80ies

@The_Elf Would you give some information about your setup ?? any technical details ??? I guess everyone’s curious …

Hi @The_Elf,
Paul I really enjoyed your performance in spite of all the stuttering. The intro was well orchestrated, almost a soundtrack (somewhat reminiscent of Vangelis). I appreciated the choice of an oboeish sound (almost “Morriconian” I would say) for the first melodic line.
Powerful bass line. Nice crescendo, with addition of arpeggios and a fatter sound for the melodic line. Climax and then outro with no drums…first part really good!
Then it starts again in a very “Jarrish” way but instead of a “Magnetic Fields pt.4” synth line we are given an organ solo…nice!..it’s like Jarre and Vangelis had met in the 80ies and decided to write a piece together…then Oldfield comes along saying “why don’t you allow me to play a solo on it?” and he starts playing every instrument present in the room.

It would be great to get a uninterrupted recording of your performance.
Cheers,
Gabriel
P.S. Have you found a pedal to go with the Elka MK76? I have dismounted and cleaned my Elka pedals and now they are ok. I have taken a few pictures of the dismounted pedals, in case someone wants to try and reproduce the circuit.

I think I have the technical glitches down to just being a bit too ambitious with the streamed video format. It’s a lesson learned.

Thanks for all the kind words. Other than seeing all the messages of panic coming in(!) I actually quite enjoyed myself! It was a shame that the world didn’t get to see all the fancy light-mapping projector effects!

@humphrey
The organ was the Yamaha reface YC. I was playing this from the Hydrasynth keyboard, so was able to hold down a chord and use poly aftertouch to introduce Hydrasynth sounds under the organ chords. Once I’d completed the lead parts I switched off the organ percussion.

@oktogon
The whole rig is based on Cantabile, using a mixture of software and hardware instruments. In particular I have an 8-input mixer Rack built in Cantabile, controlled by MCU commands from an iPad running MIDI Designer Pro. This mixer is the heart of my rig. The fades/cross-fades were created from MIDI files played by Cantabile’s Media Player and curve-mapped to suit.

To pull this all together…

State changes stepped me from section to section and bindings triggered any changes required, including fades.

The Enso looper was mostly under my control (also set by state changes), so I could record and latch Mellotron sounds in a loop as I played. The huge advantage of Enso is the way it can gradually fade looped material, like a long delay - something I’ve used my Helix pedal for in the past. I love layering loops of Mellotron parts.

I hope this all makes sense! It sounds much more complicated than it really is.

I’ve not found any pedal that has worked with the MK76, and I’ve run a few tests, with the help of an engineer, which has proved inconclusive - nothing seems to work, leading to a sneaking suspicion that maybe the pedal input is broken.

I have 200mbps download here (don’t know speed of upload), but what speeds the streaming service has I don’t know. I just stream to them and they do the rest.

If the service has an explanation of the technical problem I would love to know if possible what it was, just out of curiosity. If there is a good un-interupted video download let me know, I liked it! …

As I understand the best they have is on YouTube.

Essentially I just had the video quality too high on the night. It was fine in tech check, but looks like the net was much busier when we ran on Saturday evening.
YouTube