How Not To End A Gig

When the Finale becomes VERY final. I would not recommend this to anyone. A new definition of “killing it” at the gig. 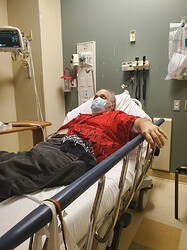 Wow. I hope you make a full recovery.

Thanks Jeff, was not expecting this for sure. Going through many tests this week, and taking it easy. Really appreciate my bandmates and their quick reactions.

Oh my, best wishes and hope you will get well pretty quick.

Hi Corky.
I am truly sorry, I am very close to you.
Get well soon my friend!!!
Sergio

Like the others I am very sorry you fell ill. I wish you a speedy recovery and some more healthy days ahead.

Much Love Doug, you are an inspiration …

So sorry to hear! Best wishes for a quick recovery!

Many Thanks Dave. I was loading out. My bandmates were were very scared, but quickly acted. They secured my equipment and my vehicle. I was unresponsive, no pulse, no breathing, eyes rolled back in my head, soaking wet from sweat, and gray skin. Paramedics revived me, I tried to vomit a few times, and I spent the night in ER. Many tests to take, but am doing much better at home. My GP thinks my blood pressure bottomed out. Anyway, not the way I intended to finish the night.

Very unfortunate news you gave us Corky.
Hoping you have a quick recovery!

Sorry to hear about that, @Corky! I really wish you a speedy recovery! I hope you will get better quite soon, so you can get back to music!
A big hug!
Gabriel

best wishes from here. I keep my fingers crossed that you get fully recovered and that the crap doesn’t last too long.

Against the pain I drink a few glasses of beer to your health.

All the best, so that you can hit the keys again soon,

Heck! Just get yourself well - nothing else matters.

Much love to you guys!

Likewise. Best wishes, Corky. Hope you are OK. I’ve had my own health scare over the past year, but that was at least “slow burn”, and the first time I have been in hospital since I was 16. So I count that as not bad going…

And like humphrey. I will drink a glass of wine tonight to your good health

PS: I do not know why, but on reading your predicament, the “Hitchhiker’s Guide to the Galaxy” just popped into my mind, esp as I have just watched it recently (the classic 70s series, not the dreadful 2005 film).

Why? The band Disaster Area

Disaster Area are a plutonium rock band from the Gagrakacka Mind Zones and are generally regarded as not only the loudest rock band in the Galaxy, but also as being the loudest noise of any kind at all. Disaster Area are fronted by Hotblack Desiato and their best selling single was released on Earth under the band name PRISM and is titled Spaceship Superstar.
Regular concert goers judged that the best sound balance was usually to be heard from within large concrete bunkers some thirty-seven miles away from the stage, whilst the musicians themselves played their instruments by remote control from within a heavily insulated spaceship which stayed in orbit around the planet - or more frequently around a completely different planet.

This has not, however, stopped their earnings from pushing back the boundaries of hypermathematics, and their chief research accountant has recently been appointed Professor of Neomathematics at the the University of Maximegalon, in recognition of both his General and his Special Theories of Disaster Area Tax Returns, in which he proves that the whole fabric of the space-time continuum is not merely curved, it is in fact totally bent.

But why did it pop into my mind? Apologies for the macabre humour, but I think you will get it it: It is the fact that when Arthur Dent and Ford Prefect bump into Hotblack Desiato at the Restaurant at the End of the Universe, he is spending a year being dead for tax reasons…

Off-Topic:
Canadian Band, PRISM :
On March 6, 2011, Prism’s “Spaceship Superstar” was chosen as the wake up song for the Space Shuttle Discovery crew members.

Prism (often styled as PRiSM) is a Canadian rock band formed in Vancouver in 1977. They were originally active from 1977 to 1984 and have been active again from 1987 to present. Their classic line-up consisted of lead singer Ron Tabak, guitarist Lindsay Mitchell, keyboardist John Hall, bass guitarist Allen Harlow and drummer Rocket Norton. The band's sound is a mix of Album-oriented rock (AOR) and pop rock and they have released a total of eight studio albums, three compilation albums and one li...

. Hope you make a full recovery and are back to gigging soon. Two words: Equipment Sherpa. I’m surprised to not see a controller on your tray table.

All the best dude!
So glad to hear you’re on the mend.