I’ve been listening a lot to Dr. Lonnie Smith. He gets some very strange sounds out of his B3

I was gonna say that, but I’ve said enough already, lol. Would be a candidate tho.

I spent some time with my MIDI Organizer script (see this post) today and resolved one of my key bothers: until now, I had to set my organ sound, then copy the settings drawbar by drawbar to the Organizer plugin, then do the same for the alternative drawbar state. To resolve this, I added a part to the script that listens to incoming drawbar MIDI message and stores them internally. Also, I added (for lack of real “buttons” in ReaJS) a little dropdown at the bottom of the sliders that lets you select where you want to store the current state of the drawbars - the 1st or the 2nd set of sliders: 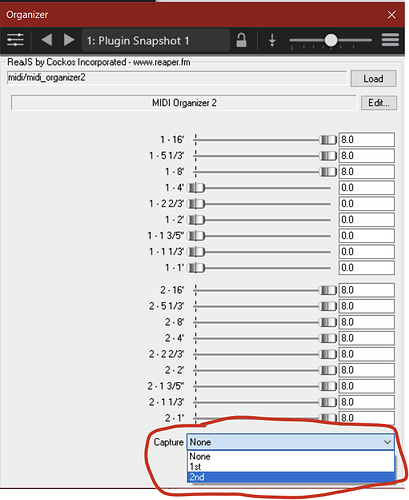 As soon as you select and release the dropdown, the drawbar settings last received will be copied to the respective slider set (and the dropdown resets to “None”).

In my “Organ Solo” rack, I’ve created a set of bindings that send all changes to the drawbars to the Organizer (ReaJS) plugin:

this way, any change to the drawbars, be it through manual operation or state changes, gets sent to the Organizer plugin (invisibly). Now I just need to select the set of sliders I want, and - presto! - sliders are updated to reflect the current state of the drawbars.

The bindings above work for the upper set of drawbars (which is what I usually use for drawbar morphing exercises); if you want to do the same for the lower drawbars, use the Organizer 2L script and send CC 21 thru 29.

Hi Corky ! As I am playing with Drive through the IK Leslie, I was wondering if I could connect my B5 vst to my Vox AC15 Electric guitar amp ? Do you know if there s any risk for the cabinet / and or the Rme Babyface Pro sound card ? Would like to experiment organic rock sounds with my fuzz and overdrive footstomp pédals. Have you ever tried it, Sir ?

I don’t believe there would be any damage to the cabinet, or audio interface. especially the way they are made now. But, as the cabinet would be last in the chain, and all you would be doing is amplifying the end sound. Since I play guitar thru amp sims, I found very quickly that playing from the sim, to the amp, just added more amp, and the sound was terrible.

The whole point is to run thru an amp, then into the Leslie. When players “mod” the Leslie, they are usually replacing the normal amp with a higher wattage amp. If you want just the B5(no Leslie) to be played thru the Vox (ala Jon Lord), just set the cab setting in B5 to “DI”. But, since you are using IK, there are several amps to choose from, prior to the Leslie cabinet.

I would imagine you could run the B5 out to the Vox, and back in as an audio signal, then thru the Leslie. Understand tho, using the IK at the end, you will need to disable the amp inside the IK, or you will be re-amping an amp, which really sucks…again, experience from using amp sims.

I’ve never tried it, but I could see it’s advantages. I just try to keep everything under the VST umbrella, just because I have enough gear to haul around as it is, and I can get some really great rock tones thru IK. Amplitube has the advantage over TR5 in that there is a huge amount of amps to choose from.

Something to try tho, is put an amp sim in front of the IK.

Shouldn’t be- just run the output of the interface very low because it’s line level and the amp wants an instrument level signal so you can overload it rather easily. Let the Jon Lord tones commence! And yes, in this case yo’d want to leave the organ VST as clean as you can, a DI sound and let your real amp do the work. If you try to take the sound of the Leslie processing and then re-amp that it’s gonna sound bad. But you can get some tones like, say, the solo on Low Spark of High Heeled boys.

But you can get some tones like, say, the solo on Low Spark of High Heeled boys.

Oh man, I love that sound! I’ve using a Farfisa through an amp a lot on the project I’m doing now. I’m trying to do a very 70s inspired production with an imagined band that couldn’t afford any of the “good” gear. It’s all electric piano (but wonky), Farfisa, clavinet, not much synth and no trons and Hammonds.

What are you using for the Farfisa? Or is it hardware?

I bet it’s fun to see what you can do with just the clav, farfisa and ep with amps (and effects pedals?)

It’s the Arturia Farfisa. There’s one song where it sounds almost indistinguishable from an ARP String Ensemble. Which makes sense, under the ensemble chorus the basic oscillator setup on a string ensemble is probably a lot like the organ. I’m also running it through the IK Leslie for a close but no cigar Hammond sound

It’s nice! And yes, a lot of effects and amps. I always loved Rick Wright’s ethereal Pink Floyd Farfisa sounds, he pulled so much out of that thing.

Thanks guys for these clever words. I’m gonna tweak between tube Screamer pedals, B5 VST, Vox AC 15 Handwired tube valve amp and IK Leslie. If something interesting comes out, I’ll share it here, for sure ! I am a beginner with Hammond techniques and I started practicing Hush from Kula Shaker…

I always loved Rick Wright’s ethereal Pink Floyd Farfisa sounds, he pulled so much out of that thing.

Yep, that’s it. I don’t have the T7E on the laptop I’m working on but Echoboy has a decent Echorec setting as well… The Auditory emulation really sounds fantastic though.

This is interesting. I wonder if it could be used to design a custom Leslie effect. 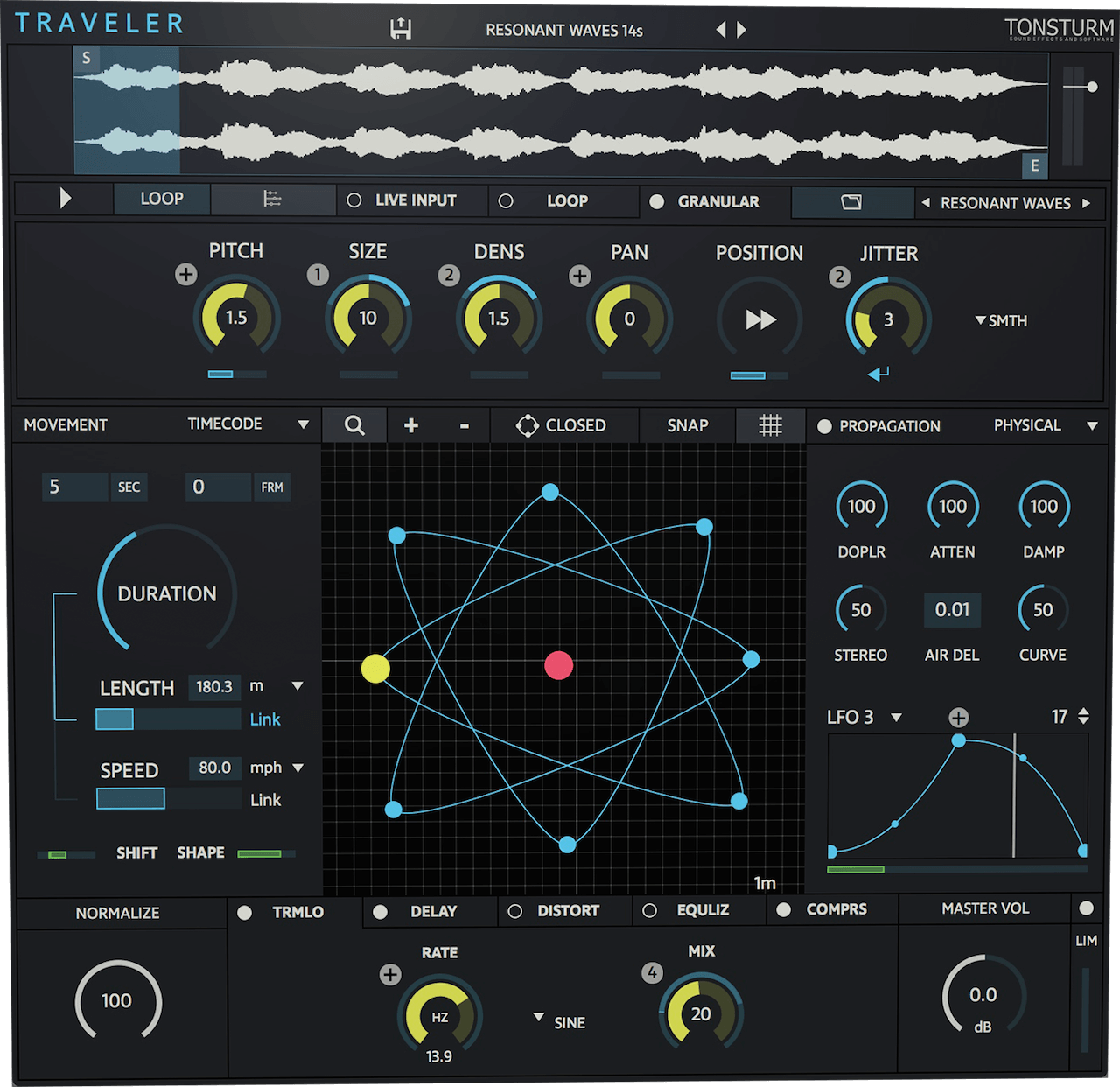 TONSTURM TRAVELER precisely models the acoustic phenomenon of the Doppler effect, with a powerful and intuitive graphical path editor to determine a sound's virtual movement.

Exactly what I was thinking. Reminds me of UVI Rotary.

I downloaded the demo. I don’t expect a rotary sound will be achieved by this, at least judging by the presets. It completely changes the incoming signal and it didn’t sound like an organ. If I get time to go deeper, I will see what else it has.