Superior Drummer 3 updated and now I can't load the plugin

I’m using Lite (and probably will upgrade if it serves me well), I’m not new to DAWs or VST hosts but I am new to Cantabile.

I had been using Kontakt and SD3 in my template and now I can’t use SD3 as Cantabile says it has updated so I need to reinstall SD3. (screenie attached)

The thing is, the Toontrack product manager already does all that for me, it cleans out old versions of software and replaces it with new ones, so there shouldn’t be an issue. Kontakt 5 is still working (and probably because we are on ver6 now and it’s not been updated?)

I have uninstalled and reinstalled Cantabile with no luck. 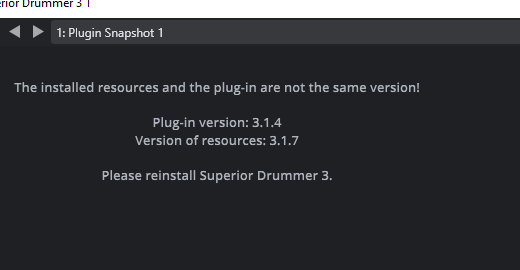 Furthermore I do not see the plugins in my folder, but they do appear in a search, what I have I done wrong here?

Hi Jonny and welcome to the forum!

It sounds like the updated VST installed to the wrong folder and C3 doesn’t see it. Go to the Tool>Options>Plugin Options and check what folder(s) are selected. e.g. 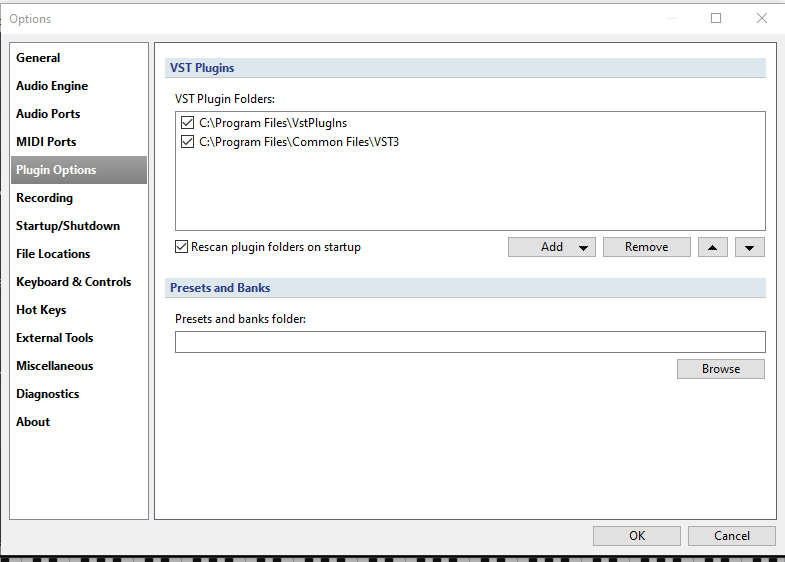 Then uninstall the update and re-install making sure it installs the VST plugin to the same folder you checked earlier.

Hi Dave, thanks for replying.

I’m going to screenshot for you as I have to emphasise that there is nothing to uninstall, what do you make of this?: 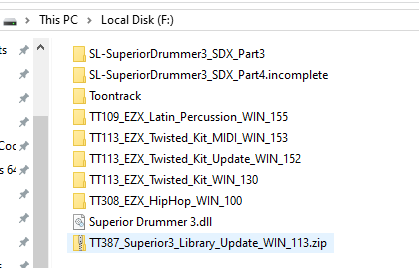 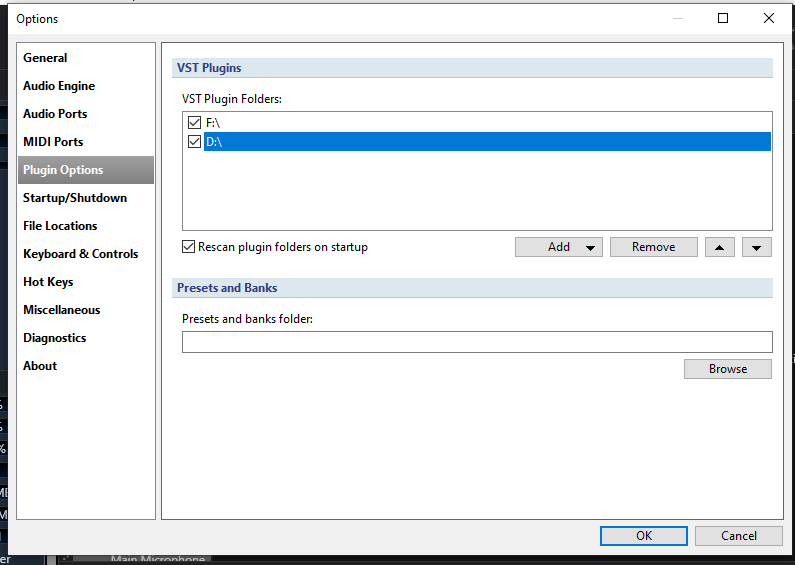 Thanks for posting. When you run the Superior Drummer installer it allows you to chose the location of the VST plugin and the Library differently so my best guess is still that when the install is going on the path for the new Superior Drummer 3.dll file is not F: anymore but in a folder somewhere else on your system. That is all I can think of it could be. You can usually check the .dll properties in the file explorer and get the version number so you could check it to see if it is indeed 3.14 instead of 3.17on drive F:. Also if what I believe is correct there ought to be 2 Superior Drummer 3.dll files in different locations, which could be checked with a full file search of all Drives in the system. It is without doubt something to do with the install paths. Sorry it’s not working for you if nothing I said helps you could send an email to @brad with your problem description as well to see what he thinks.

You were right to insist on this, I did a deeper search into my files and found the updated .dll in my native instruments folder.

How it got there is a mystery, as my toontrack app routes everything into F drive, as you can see. Anyhow, the issue is resolved so I’ll just add the NI folder location going forward in case it happens again.

Thank you for your help

Excellent news Jonny, glad it’s sorted and you are back to making music!

Good to see you’re trying Cantabile! It’s working really well for me with Superior Drummer. I’ve set my UMC202HD to 48khz and 64 buffers. You have to set it in the audio interface and then go into Cantabile options and make sure the audio interface settings match there. Just mentioning this because I got this wrong early on.

Watch out for levels - now they can be boosted in Cantabile. Some kits are louder than others so you can end up with too much gain.

Hey Doug cool to see you around here.

Yeah as my last email mentioned I just needed something a bit more purpose built than Reaper (which I love, but it’s overkill).

Not to worry the Zoom seems to be doing great at the moment, right now I’m trying to establish MIDI between two laptops so that I can mix the drums remotely from the DAW and record the drum MIDI into the mixdown (alongside the audio so that I can swap kits in post, totally new way to remix!).

Does lite have snapshot capability?

Lite, Solo and Performer all have the same song save ability if that’s what you mean by snapshot. When you save a song everything is captured, the VST Plugin’s settings, the routing between plugins, the audio and midi input and output routings.

The magic that Performer brings for a live edrummer using Superior Drummer is that you can save a bunch of songs, each with a different Superior Drummer kit (even from different libraries) and put them in a “Set List” and then check a box next to “Preload” in the Set List Menu. When you load the setlist it takes a bit more time but you can then switch kits instantly by changing songs. Come to think of it, a YouTube video of that happening would astound forum members over at vdrums.com.

That was the first way I figured out how to achieve this. There are probably other ways using “Song States” but I haven’t bothered exploring that yet because I’m able to switch between the 3 kits I’m using easily with the Pre-loaded Set List.

Cantabile can record what you are playing in it. Perhaps you could just copy that midi file over to reaper after playing?

That’s interesting, does recording affect latency or stability at all?

I’m not up to scratch with jargon yet but by snapshot I basically mean instantly changing multiple parameters within one project/preset/session.

So like you I’m going to have Kontakt multis and a few Superior Drummer plugins loaded and I’m seeking a way to mute and unmute different plugins based on what I need, while also sending MIDI to bome to select the appropriate note mapping.

Tons of fun to be had in Cantabile Performer with eDrums…

I’m using Lite at the moment, which of these features you describe apply to that?

MIDI Mapping: This is a can of worms for me as I’ve gone through a lot of effort to map everything out on Bome I cannot easily justify moving onto this plugin unless it has lightning fast mapping capability and a super easy, Maschine level user-friendlyness, I’ve been mapping one module to go to multiple channels at the same time (so I can mix and mash SD3/Kontakt VSTs on a single kit) and special FX like note delays (so it sounds like a drill march rather than a lone drummer). Bome will just send MIDI out on virtual cables so other music applications should just perceive it the same as a USB MIDI device. What do you use PizMidi for? I’m also using Bome to send MIDI commands from the DAW laptop to the drum laptop. Not to be a negative nancy, this does sound useful!

I guess I really need a jardon dictionary here, what is a song? what is a setlist?

Is a song what you would call a project in Ableton/Reaper/DAWs?

What are racks? Is that similar to a Kontakt multi?

Is a setlist like in a guitar modelling pedal where you have a list of presets you scroll through?

Now let’s take this one step at a time (and be sure to take a look at the excellent guides and @brad’s excellent videos in the support section).

So much for Cantabile basics in a nutshell - please study the Guides section for more.

Now on MIDI mapping: the pizMIDI plugin I mentioned is a simple note mapper - it maps input notes to output notes, e.g. map C3 to E4. So it is easy to build a drum map with it. And with Cantabile’s plugin presets, it’s super-easy to switch between different maps - e.g. I have different maps for different e-drum sets with different output configurations controlling the same drum instrument (Slate Drums).

I also drive multiple drum instruments from the same drum module. To do that, I use Cantabile’s MIDI route properties first - the simplest way is to select key ranges directly in the route properties (e.g. C3-D3). But you can be far more sophisticated with the “suppress events” filter in routes. With this, you can tell Cantabile exactly to “allow” specific notes or to “suppress” them: 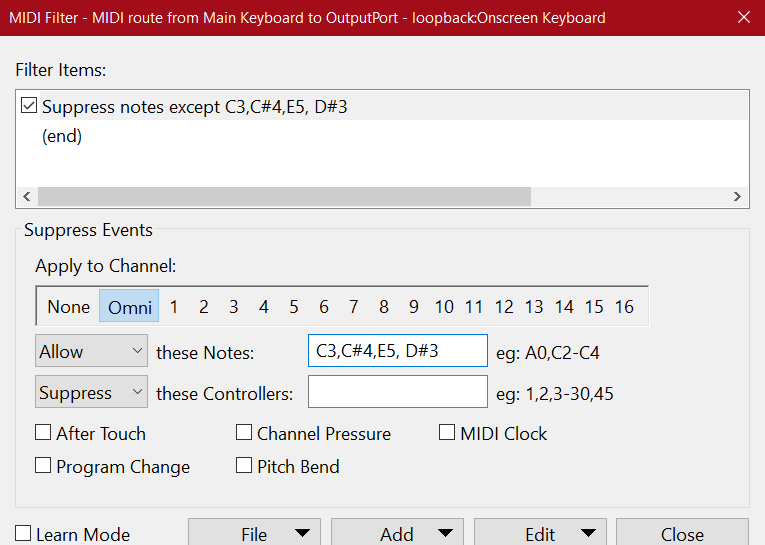 So on one route, I’ll “allow” only the specific trigger pad that drives my cowbell in Sforzando, on another route (that goes to Slate Drums), I will “suppress” the same note to make sure this trigger doesn’t go to Slate.

Re delayed notes: I don’t think there is a function directly in Cantabile that can create delayed duplicates, but there is certainly a MIDI plugin somewhere that will do exactly that (guess somewhere in the pizMIDI toolkit). Simply insert that on a specific route, and it can do its magic within Cantabile.

Once you get used to knitting your songs together with plugins/racks and routes, anything is possible - and you can switch all that to a new config for the next song or the next song section with the push of a pedal.

It’s all pretty sophisticated stuff - but if you’re used to dealing with Bome’s MIDI translator, you’ll get the hang quickly once you give the guides and videos a first run-through.

Hi Torsten, thanks for this detailed response it really gives me an idea of what I can do with the software.

So would I need Performer version to do all this?

I should be able to have a hefty amount of VSTs loaded, I tried this on Reaper and managed to get all my Kontakt percussion running + 4 different SD3 kits (Drums, Latin, Twisted Kit and Hip Hop). My laptop has 16GB RAM, however it is a little old and runs on an old processor.

With Bome I’ll admit I’ve gotten bitten by the sunk cost fallacy bug here but at least if I use the Cantabile mapper I’ll know exactly where all the notes are.

I used Bome a lot before Cantabile. My previous setup with now-defunct Forte required it. I tried to stay with Bome for a while, but it was just too fiddler. The only capability Cantabile doesn’t have is user variables. Everything else feature-wise is matched.

I do believe, like paying song royalties, in supporting our local developer. I had no problem upgrading to Performer to get Racks and to contribute to the future development of Cantabile. Someone once said, “the workman is worth his wage”. It took me about a day to implement the basics. After that, I just fixed songs as required.

Thanks for weighing in and good to hear there is another Bome user out there.

On upgrading, it’s not a matter of willing but ability, by all means if you have $200 spare shoot me a PayPal XD I’m asking because it’s going to be a while until financially speaking until I can upgrade. I’m running a studio so I have all kinds of gear to pay for.

Thanks for all the great Superior Drummer tips! Agree about trying to stick to one instance. I’ve timed my Lenovo i5-3360 Samsung TB SSD equipped laptop for 3GB kit change. It takes about 2-3 seconds which I think in many cases can be done by tapping your next button right at the end of a song.