For the next build I’ve added a new menu command in the Tools menu - “Show Externally Held Notes” which shows any note on events that have been received from a MIDI In device for which a matching note off event hasn’t been received. 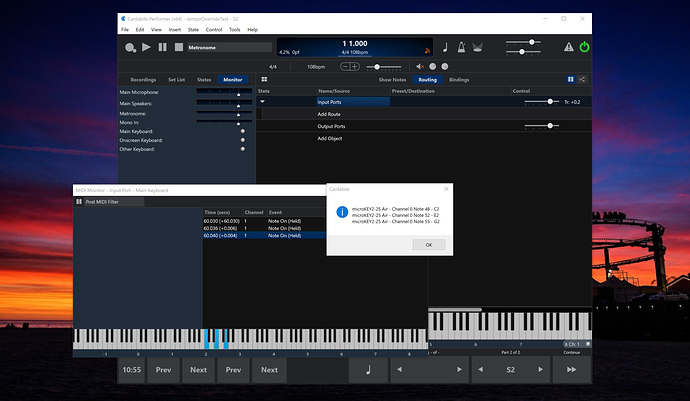 Note that this works at the MIDI device level - not the MIDI port level. ie: it’s very low level, before any routing/manipulation by Cantabile.

eg: you’ll notice in the screen shot the MIDI Monitor is showing notes held on the Main Keyboard, but the Show Externally Held Notes command is showing the held notes on the microKEY-25 Air device (the device I currently have mapped to the Main Keyboard port). 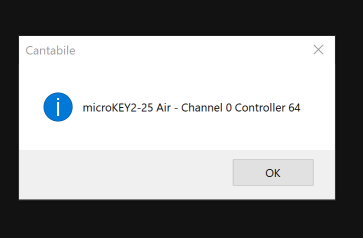 Not sure when the next build will be, but this will be included.

Thank you Brad. Will be waiting to use it.

Hmmm, I’m starting to really celebrate my decision to go for the MPK-249 instead of the Arturia Keylab…

See my earlier review, those keylabs are lower quality then the mpks. Mpk has issues with the mod wheel. But the overall quality is high. Keylabs overall quality is China toy level. Cheap keys, loose knobs, bad usb connectors…
Mine came delivered with some knobs off :-/

Pitty because it has all the features I wanted…

This is mk1 but mk2 has the same problems

I see a new product line opening up

In the store it certainly didn’t feel like the Keylab Mk2 was lower quality than the MPK. The Mk1, yes, but the Mk2 is a significant step up in hardware quality. Assuming they can get to the bottom of these firmware issues.

In the store I use, Keylab mkII seemed the best solution possible.
There were M-Audio, Alesis, NativeInstruments.
Native were expensive and not driven to live use.
I have Kontakt but I am not interested to edit sounds on my keyboard display.
I do my editing at home with a PC.
On stage I need live interaction. So Arturia was my choice because of keys feeling and possible live interface

And I guess the other 5 controllers I used, magically had the same problem…according to you “quality issue of keys or firmware”, within a few weeks time?
I also have an Arturia mini I bought six years ago…no problems. but stuck, like the others, in the same time frame. As for hardware keyboards, my reliable E-MU Proteus I purchased in 1992, never, ever stuck a note till yesterday, when I ran midi out to B-3X thru C3.

Hey @Corky - it looks like even though you guys have similar symptoms, the root causes are different between @Furio and you. I recall that Furio hooked up his Arturia keyboard to a hardware synth - and the stuck notes still occurred. So Cantabile (or the PC, MIDI drivers etc) definitely doesn’t cause the issues in his case.

Looks like your situation is different - but it sure would be interesting to hook your sticking keyboards up to a hardware synth and see if anything gets stuck.

How are you hooking your keyboards up to Cantabile - hardware MIDI interface or USB?

Confirmed. I had problem driving Montage with Keylab. No PC.
Just controller with power supply and a traditional midi cable connected with Montage.
New feeling that new firmware on controller and new Arturia USB driver for Windows could have improved performance.
No stuck notes in last 4 hours of rehearsals.
These 4 hours were with C3 3628 version.
Massive test tomorrow for the weekend.
I will check new C3 version 3630 too.
Its diagnostics could help

I’m pretty sure that keybed on the Keylab is a Fatar TP/9S - http://www.fatar.com/Pages/TP_9S.htm - I had to make the same repair to the keybed on my Axiom 61 1st gen which has the Fatar TP/9 which instead of the “diving board” type keys has almost a waterfall shape.

Definitely a different situation. I rarely use hardware synths for anything anymore, but I did use my Emu Proteus into C3 lately and produced a stuck note. It uses only a 5-pin midi cable…no usb connection when manufactured. This was happening only on the Hammond clones, Blue3 - B-3X - B5 - VB3 1,4. VB3 was the most active culprit. Other VSTs worked fine. My recent controllers are only USB, into laptop directly or in a powered hub. This happened in both situations, and only with Hammond clones.

The last time it happened, I was playing solo on “Green Eyed Lady”, and one note stuck, but I was able to keep the solo going with other notes, even though the stuck note kept droning until I hit panic button.

Since I moved to 3630, no problems yet (knock on wood). It was only sticking occasionally, so recreating it was impossible. My hub was working fine, and all cables were good. I was watching the C3 signal green lights responding to key press as the stuck note droned. I used the same controller for other VSTs after glitch, with no problems. My next guess was possibly laptop usb ports…maybe driver issues, or worn usb connections.

I know it could be related to cabling, hub, and controller. What I was saying earlier was… I found it strange that it happened on different controllers, different midi cabling (5-pin), only on Hammond VSTs, and directly into laptop (no hub).

The one thing I meant to try was running in stand alone, but my time is all consumed during this part of the year. I moved on with 3630 out of necessity, and will try the next C3 version with diagnostics when posted. It will be after the new year before I will have time to setup and experiment. Until then, I have no choice but rock on!

If you have usb problems uit van try a usb voltage meter, they are cheap on Chinese shops…

To be honest…
I tried my Keylab 61 mkII before buying it, in dealer showroom together with others.
Essential version seems rather cheap, but my version which is more expensive, seems quite good. Keys feeling and all other mechanics.
Much much better than old version tested by Woody

Depends probably on your expectations and how you use it.
This is my review…

I confirm my humble opinion.
M-Audio, Alesis, Native that were in my shop were worse than Arturia.
I am sorry I could not test Nektar, Akai or Novation.
This is exactly why I started this discussion.
To get opinions from heavy users.

I know it seems out of this world.
Tonight one hour of wild playing. Only for test purposes. So I played intentionally hard and really wild.
IK B3X with or without C3.
No stuck notes…
New USB driver of Arturia seems to have solved.
Can you guys try a test on your setup?

Build 3632 up now has the new “Show Externally Held Notes” command. The idea is this:

when you get a stuck note, go Tools -> Show Externally Held Notes. If it shows nothing held then it’s probably an internal Cantabile routing/switching issue. If it shows held notes it means one of your controllers sent a note on without a matching note off. (ie: A note off event was dropped somewhere along the line).

Many thanks Brad…downloading it now.