The reason is I’m using the Media Player for Backing Tracks and use the WAV waveform as a cue for when events are about to happen (yes I know I should be better rehearsed but a visual cue is handy when playing out from a long repetitive section). But it’s not always immediately apparent where the backing is changing from one section to another. Just a nice to have and if looping is to be implemented I think this would be a simple thing to add (regardless of the ability to jump between the markers).

2 . I’d also wonder if its possible to add a delay (either realtime (mm:ss:) or musical (bar:beat)) to a media player. So when the transport is started one (or more) media player could be prevented from starting immediately.

The reason for this is to allow one file to play before another as a way to allow e.g. a short intro track to start before the main track but no break to timing (metronome). Some sets I have we have an intro but not always into the same track. This would mean the intro media player could be loaded in any song and just add a delay e.g. 8 bars to the backing media player, rather than editing the file in a DAW for each track. In my head its simple but I’m likely overthinking and/or missing things. This may be tied in with the transport position bindings but I’m not sure this would introduce a slight gap between switching.

Hi @Hunter_Barr !
2. Yes it is possible with some bindings: 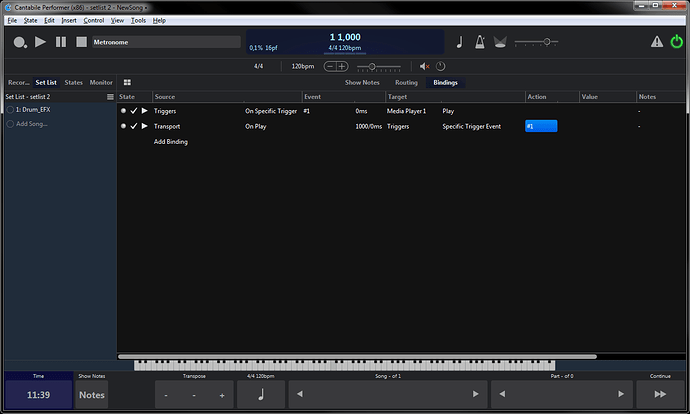 There are two bindings here.
Second is launching the trigger #1 (with 1000ms delay which can be specified) and the first one is executing media player play action (triggered by #1 trigger).

More advanced method is to use another software (such as Ableton Live ) synced by midi clock with Cantabile.
This scenario could fully match all your 1) and 2) demands

Thanks @Alexander. That looks like a good option for “2.”. I’ll give that a shot (I’ll need to convert x bars @ x BPM to ms). I’m hoping this doesn’t cause a break in tempo/timing during the switch so will report back how it works.

I’m trying to avoid external software from Cantabile during my demo period as one of the main features of Cantabile for me is the embedded Media Player, and Ableton or any other DAW (just for labelled markers in the timeline) is probably overkill for my needs… In part as I’d have to manage the correct batch of media that’s loaded in Ableton/DAW for each set. The benefit of embedded media player for me is the self-containment and for each song/setlist it loads what I need and nothing else.

It looks like bindings are far more powerful than I’d imagined - I may have to experiment a little more. Thanks again for the advice

I’m not sure, is there a way possible yet, by right click on the timeline, add marker, would be super

Thanks for the suggestions - I’m aware of need for things like this but I’m very reluctant to make any changes to the current media player implementation since I’m probably going to be completely re-writing it and don’t want to add features that need to be ported to the new thing.

True, i remember you said something like that indeed the last time i sended you my never ending prayers

I guess you’ll never be out of ideas and work.