I thought I’d start this work (as described in the above linked blog post) by doing a rough mockup what I’m envisioning for the new bindings UI: 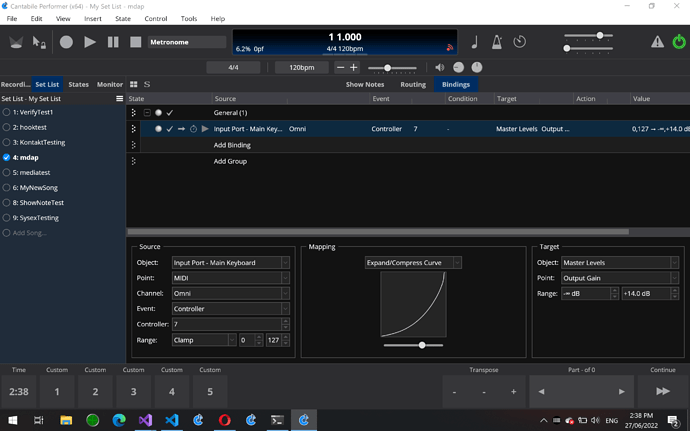 What do you think?

I like the new GUI for Bindings, clearer and better organized interface.
Thank you!

I wanted to get an idea of the scope of this work so moved all the existing bindings code to a “old” namespace. 87 files affected. I’ve got my work cut out for me…

My biggest gripe with the current bindings is that parameters such as curves or ranges don’t update in real time.
When you’re trying to tweak a setting having to repeated open and close the binding to test its effect is a bit 1990s

having to repeated open and close the binding

The new UI is doing away with most modal dialogs and moving them into that lower half of the bindings panel. Adjustments will be immediate.

I like the proposed layout changes regarding simplifying the fields in the main table view. I had a few questions when you get a chance.

Will it still include a comments field?

I ask because the change to the use of the lower edit pane made me wonder how that would change things I do.

Thanks for the chance to pitch in!

Will it still include a comments field?

Yes, in discussion with my in-house UX expert (Mitch) yesterday this came up and we thought as a full width text field below the three group boxes, but I need to mock it up - concerned it might take too much vertical screen space (that area’s already taller than I hoped).

I ask because the change to the use of the lower edit pane made me wonder how that would change things I do.

There’s definitely going to be issues here and I did mention this and your fader rack in an early draft of the linked blog post but took it out because I thought it was too specific for most readers. I’m not exactly sure what I’ll do here, but it’ll probably involve a bunch of emails with you :).

Or, if you just want to put together a list of exactly what you need to be able to do I can start thinking about it now. I know you use bindings to trigger the binding delays settings what else is on that list?

What ever happens we’ll figure out something - but it will definitely require changes to your rack(s).

Over the next couple of days I’m going to be posting some tech/dev specific stuff here. If you’re not technically inclined this probably won’t be too interesting to you.

I’ve said this before and I’ll probably say it again - when coming up with solutions for technical problems I’m a big fan of pencil and paper. If I’m ever struggling to wrap my head around something, I step away from the computer and just write out all my thoughts. I rarely, if ever, go back and read any of this - it’s just a thought process.

This was me thinking about this work:

From this I’ve now put together a first pass of the core interfaces that will make up the new bindings framework:

Today’s job will be to start moving a couple of the existing bindable objects over to the new framework and see how it sits.

Made some good progress today:

So far this seems to be working out nicely. The code seems simpler, more concise and more self contained. Previously each set of binding points on a binding object were kind of scattered through out the class, where as now everything to do with a particular binding point is completely self contained.

Tomorrow I think I’ll implement a couple more bindable objects (perhaps the Plugin object and one of the UI related objects) just to make sure the approach I’m taking works in a few other scenarios and isn’t to code verbose.

Once I’m happy with that I’ll start on reworking the actually bindings manager and binding objects.

One idea: since you’re separating bindings into source, curve, and target, this could be an opportunity to bring in not only jump prevention, but also “fading” at the curve level. So instead of waiting for the source to reach and catch the current level, there could be an option to fade to the target value at a defined speed (ideally with the option to sync to current tempo - e.g. quarter, half-note, bar, 2 bars…). So whenever a new target value is received, Cantabile starts a fade from the current to the target value.

BTW: This is also something I’d reeeeally like for levels in the routing page. Currently, making levels state-dependent can create nasty level jumps, so I use a “level automation” rack to smooth my levels when I need smooth transitions. Having the ability to right-click a level fader and set the fade time would make this far more comfortable and intuitive - I can see all level faders at a glance in routing table view and simply make the necessary adjustments.

this could be an opportunity to bring in not only jump prevention, but also “fading” at the curve level.

Yes - this is what I was hinting at in the blog post where I mentioned animated bindings. It’s not something I’m actively designing for right now, but definitely bearing it in mind.

This is also something I’d reeeeally like for levels in the routing page.

OK… this could probably be built on the same underlying engine pieces. Basically both of these depend on some improvements to the audio engine to support animated transitions, but that’s one step further down the road to what I’m working on right now.

Not much progress yesterday because:

Fun fact: you can’t clean install Microsoft Windows from USB on a Microsoft Surface Laptop - the keyboard and track pad don’t work and you need to use an external hub and devices. It was easier to install Windows on my Apple MacBook than on a Microsoft laptop.

Today I re-did implementation of binding points two more times. It’s important I get this right early because Cantabile has alot of binding points and I need to make sure it’s right before I convert everything over.

The breakthrough was to use attributes and reflection. To explain a little more, there’s two parts to declaring a binding point:

A typical binding point now looks like this in code:

Also, since I didn’t want to have to write a separate class for every binding point, there’s a default implementation that implements the interface by forwarding to callback function properties. This lets me inline most of the code for most binding points like shown above. In other words, I don’t need to write an explicit PluginGainBindingPoint class - instead I can just use a generic binding point class and hook up things up via callbacks.

And I think that’s as concise as I can get it. The code above is everything required for the plugin gain binding point. This approach might need some more tweaking, but I’m pretty confident it’s correct enough to proceed
.
Time to move on to implementing the actual bindings manager and binding classes.

Well we planned to but our flight got cancelled and replacement flight is two days later, so…

I spent a good part of yesterday and today working on:

It’s coming along nicely, but there’s still a long way to go. I’m trying to do this without breaking the build. I’m effectively building a new binding system that for a short period during development will run in parallel to the old system. The hope is that I can then move things over piece by piece and check each part works as I go - as opposed to breaking everything and having to fix everything before I can test anything.

I’m effectively building a new binding system that for a short period during development will run in parallel to the old system. The hope is that I can then move things over piece by piece and check each part works as I go

you love living on the ragged edge of disaster, don’t you?

OK, so the week away turned into two weeks due to some personal stuff, but I’m back at it this week. Yesterday was just catching up on support emails and getting build 4051 out. Today I got back into this bindings work.

Currently I’m working on the various mapping objects, and so far have implemented:

Mostly this work involves extracting, cleaning up and refactoring code from the old binding implementation.

Tomorrow I’ll continue with the rest of the mappings.

Quick update… spent today finishing off the mapping implementations including porting jump prevention and relative encoder support (well part of it, since I’m splitting it between the source and the mapper now).

Also trying to figure out how this fits into things.

Didn’t know custom curves were available and doubt I’d have a need for them.