I thought it would be an idea to gather thoughts on this subject so I will start off with my solution to this issue. If you have any setups or schemes to handle this issue please post them if you can, mine doesn’t include backing tracks since I don’t use them in my work so hopefully some folks have a plan for that. I have been using Cantabile as my main live instrument. I use a Roland RD2000 as the controller and it has layering and good assortment of tones that can saved as “Programs”. It also has an easy to reach master volume knob. I set up my Cantabile songs with a binding for the PG change on the RD2000 that mirrors my Cantabile tones. I keep the RD2000 at zero in regular use and Cantabile is the primary audio out but if my laptop has a crash for some reason I simply turn up the RD2000 main volume and carry on till the end of the song and then I can check on the problem. I can also just play the rest of the set with the RD2000 and check it on a break this way. I have a hard copy list of the “Programs” in the RD2000 that match with my song list if I’m rolling that way.

I have a somewhat similar process to Dave, but my setup includes the use of backing tracks. I run 6 media players in Cantabile broken out into Drums, Percussion, Bass, Instruments, Backing Vocals and a click, which is just a count off into the song. I also have an RD2000, along with a Hammond XK1c and a Roland Integra 7 sound module. Almost all of my pianos, whether electric or acoustic are on the RD2000 or the Integra 7, so the volume knob is up about 80% of the time. I do use Velvet VST for EP along with an Electric Grand. My organ VST’s are a 70%-30% split between B-3X and Blue 3. I have corresponding backup patches on my XK1c. Similar to what Dave does, if there is a Cantabile breakdown, I simply turn up the volume knob and carry on until at least the end of the song.

We also have a backup for the backing tracks. It is a 3 piece…Drums, Bass and Keys. I have a laptop, which is also running Cantabile with the same song list and same media players and it is connected to its own interface… a Presonus 2/6. It is running on a muted channel in my X32 mixer. We are in-ear, so it is very noticeable if the bottom drops out and I have a Nektar LX25 controller right next to me. I have a panic set up that sends a CC to my digital mixer to immediately unmute the tracks channel and mute the channel that the tracks are usually running on. Of the 6 media players, only the bass, percussion and some keys or extraneous backing vocals are used. The others are there just for emergency. I also have hard copy of all my patches, especially since the XK1c is midi out only, so I must manually select them on each song.

A lot of credit goes to Dave for all of his help. Since he and I use the same RD2000, he was kind enough to share a rack he designed that allows for easy selection of the vast sound list of the RD2000. He uses a much more complicated version and posted on the forum about it. His expertise has been a great sounding board for problems that have reared their ugly heads along the way.

my setup uses 2 master keyboards (88/61). There are not only keys but also backing tracks and click routes which go to FOH separately.

Additionally I have In-Ear monitoring integrated into the setup which means I have 4 faders on my lower keyboard attached to my monitor levels for keys, backing tracks, my vocals and the rest of the monitor signal. This enables quick changes of my in-ear mix without nasty apps.

Another requirement was to use the cantabile Webserver interface to change songs.

As I wanted to have a 100% substitute in case of a crash I decided to go the hot standby route means 2 laptops running the exact same show. All songs, shows, audio-fies are synced automatically on a database based on dropbox.

This introduces additional needs as the keyboard control signals cannot be transferred via USB. To switch from one laptop to the second it was furthermore necessary to introduce an audio routing unit which changes routing by a program change from the lower keyboard.

In my first scenario I introduced a behringer XR16 rackmixer. This unit is inexpensive and can be controlled by midi. To get the midi instructions from the keyboards to both soundcards I programmed an arduino. This was also useful as the control of the mixer and faders for Inear sound could not be handled from inside cantabile. Finally I complemented this arduino to 4x4 midi matrix and placed it in a 19‘ 1U rack unit.

All this worked quite well but was really big. So I finally modified this scenario. I added an RME fireface UFXII soundcard and coupled it with my RME babyface via TOSLINK. The fireface doesn‘t need the submixer as it can be controlled directly via midi. So the final setup only consists of the fireface and the midi matrix. Together with a 1U Connector Panel everything fits nicely into a 3U rack (babyface is placed inside the rack invisible). 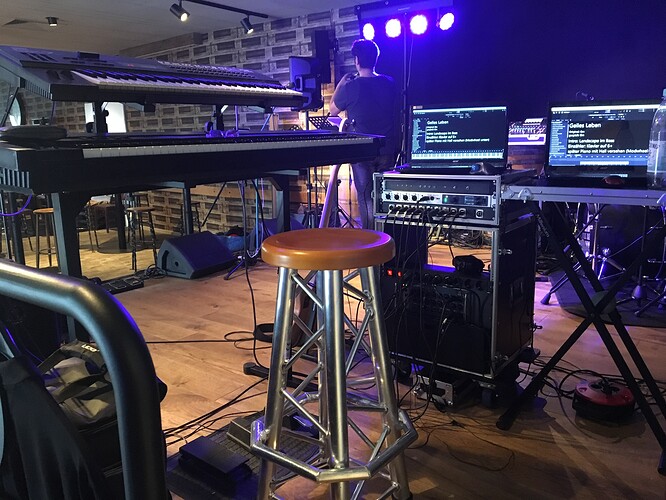 OK, here some thoughts from my side:

I run a pure “in-the-box” setup - two MIDI keyboards (Kurzweil weighted 88 key and my custom 61 control keyboard) and one guitar into Cantabile, plus a VoiceLive Rack controlled by Cantabile via MIDI out. Sending 3 separate signals to the desk (keys, guitar, break music) - used to be three stereo pairs, but simplified that down to mono.

I found that having a second “fall-back” solution with my live keyboards’ on-board sounds would be too cumbersome - essentially, I’d have to build every setup twice.

So I currently rely on a fully duplicate Cantabile setup - I run my live rig on my “live cube” (a little ASRock system) and I always have a fully configured laptop with me that could run the same show as my main rig. I actually switch between both on a regular basis in rehearsals to make sure they’re live and well. So if I run into issues with my live PC, I boot up my live laptop and can be fully up and running in 2 minutes or so. Haven’t had to so far, but good to know I can.

I also have spares in my bag for the more sensitive components: spare MIDI interface, audio interface, in-ear pocket amp, etc, so that if something goes wrong, I can somehow make things work - even if that might mean that some things don’t work as nicely as in my normal setup, but at the very least, it’ll get me through the gig…

Plus, I actually carry a third keyboard (usually a 61 key spare) to gigs in case one of my main boards goes crazy - I actually had that happen to me during a gig, with my main KB going totally crazy, transposing back and forth and turning on the arpeggiator at random. In that case: good to have your keyboards connected with classic DIN MIDI connectors - simply plug in any other keyboard in its place and go on without having to reconfigure anything in Cantabile.

Since I play mostly pub / club gigs, I don’t see the need to have a fully redundant “hot-standby” setup (yet) - our audiences would be somewhat forgiving if we had to take a quick “technical break” to get things rolling again.

If I had to build in more resilience to PC failures, I would go for a complete “hot standby” system, with two PCs running the show in parallel (so both connected to my keyboards and guitar) and both connected to separate channels at the desk, so it’s just a matter of muting three inputs and unmuting three others. Or I might go to a system based on the iConnectivity PlayAudio12 - this is an interface that allows you to connect two PCs at the same time and switching automatically from one to the other in case of failure (it listens to a “pilot tone” from the first PC, when that disappears for any reason, it automatically switches to play the input from the second).

But of course, in that case the interface becomes the single point of failure, so I’d probably go for the safer route with two PCs and two interfaces and just hope the person at the desk catches on quickly enough…

The question is how far you let your paranoia take you in terms of redundancy - carrying a second PC / laptop is pretty reasonable, carrying a second audio or MIDI interface could already be considered paranoid, and carrying a third keyboard has some of my band members scratching their heads - but it would have saved me a lot of anguish in that gig when my master KB failed (had to play half of the gig just on my upper KB until someone could drive and bring a spare). We also usually bring a spare small form factor mixing desk to be able to continue a show in case our main breaks down - of course that would mean a bit of a setup break, but better than having to end the show… But does anyone really bring a spare drum set?

Essentially it’s all about your risk appetite - in case of running an “in-the-box” Cantabile setup, the most vulnerable part does seem to be the PC running Cantabile, so it’s definitely a good thing for your nerves to have a complete copy of your setup on a second machine, ready to whip out and plug in. Strongly recommended if you are serious about a live PC setup!