Hi @cpaolo, thanks!
Well, it’s not just a matter of the vst I use now, which of course are mainly lightweight…as a matter of fact, I would like to have room for “heavier” ones in the near future, hoping I will continue playing after this covid madness.

Anyway, just to get you an idea…I used to play in a prog rock band and that’s the kind of stuff I play more often, though I also like other things (jazz, jazz rock, fusion, “cosmic” rock, etc.). Presently my piano sounds come from Keyzone Classic, but I would like to switch to something more “realistic” sounding (say Ivory or Ravenscroft).
I use a few analog polysynth emulations (arminator, OBxd, PG-8X, etc.) but I would really like to be able to use DIVA (I have played the demo and it sounds great, though it strucks 140% time load as soon as I play a chord

)
My hammond sounds presently come from NI B4 (which I have since 15 years ago) and the Organized Trio (which went to become VB3) vst. I use Dexed for FM sounds. I also have a (key switchable) soundfont of mellotron sounds which I load into GPlayer.

My first attempt with Cantabile (I have Solo) has been to setup a song that we did with my band. I have put together two versions (one is based on racks, since I am still learning how to use them). And I must say that I am happy because 1) I was able to re-learn the song (also thanks to the old scores which I found in the basement), 2) with Cantabile I can play the keyboard parts over my (no keys) rehearsal tape and just four “states” are needed for a ten minutes long song…

So my first goal would be to get from Cantabile the same “sound” that I was used to…here is the original track from the CD (all played on hardware synths):

Hi everyone!
Just an update on my new music pc. I had to increase the budget by 50%.

and I finally assembled the following system:

I have run the Perftest song and got
50% max 40% average, according to Cantabile profiler.

Overall, I am happy!

Here is the updated list (that’s just a recap of the data collected from postings above). Sorry, can’t upload a pdf, so I’m uploading excel screenshot. 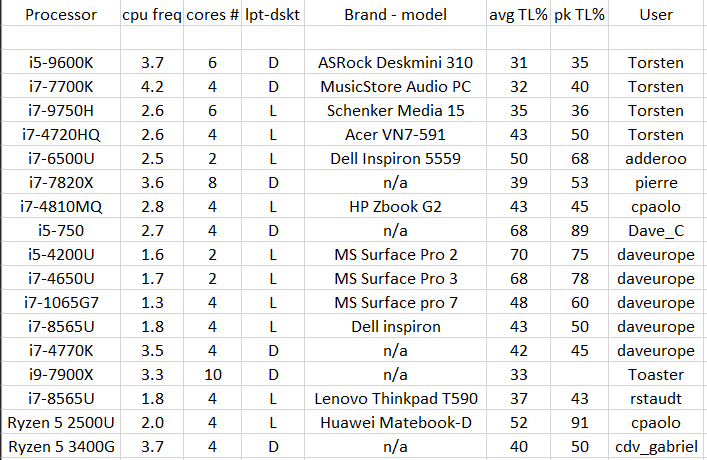 Can we say brand and model of the laptop?

Thanks. Above screenshot updated.