Thanks again Corky, my cyber hammond God ! Last question : will the Mojo give me the ability for controlling sliders to adjust thé VST instruments volumes through Cantabile ? For instance with Mojo s lower drawbars ? Thanks very much for your clever point of view

As long as they transmit MIDI it will. I will check the Mojo specs shortly, and get back to you. I am like 99% sure it does, but always best to be sure before dropping a dime.

Here are the MIDI specs:

> • 6 – Midi Out connection: Output 5 poles DIN.
> Through this output you can connect a MIDI device receiving midi data from the
> organ. Controls, as production standards, are configured this way:
> Channel 1 : Drawbars, pots, and all other controls; upper manual.
> Channel 2 : Lower manual.
> Channel 3 : Lower manual if “Pedal to Lower” function is on.
> CAUTION: It is highly recommended not to connect or disconnect midi cables
> with the instrument on. The instrument can be damaged or work in wrong way.
> • 7 – **USB output: through this output is it possible to connect CRUMAR MOJO to a**
> computer without needing of converter. It is useful in case you would like to play
_> softwares or sounds inside a computer connected to the instrument. Please check_
> driver and software compatibility first

Looks like it will do what you need it to do.

Something about the Oxygen 49…there is a setting to adjust keys on the way you play. It made a big difference, once I discovered it.

You don’t really need a Crumar pedal to achieve that. I use a Line 6 pedal…works very well, less expensive.

Thanks for the advise, Corky ! Did you manage to set your Line 6 pedal to control thé rotary speed and thé swell pedal with thé same foot ?!! If you did, what s the mode please ?

Sorry for delayed response. The Line 6 I use has 4 switches, and a volume/swell/wah pedal. I can use it to do many things, in different songs. A switch can be used to change Leslie speeds, and the volume pedal as a swell pedal. It is basically a controller sending MIDI commands. 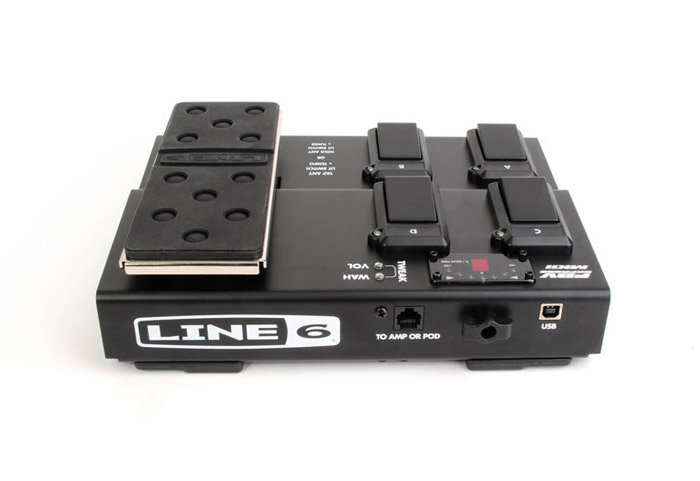 Good ! Seems to be a very good product… Very Interesting, thanks Corky.

More compact than my Roland FC300s (I have two, one as a spare) which I am totally wedded to, but if you needed something smaller, looks like these will do the trick quite nicely

looks like these will do the trick quite nicely

It does! It fits very well under my rig next to a sustain pedal. I wouldn’t mind having more switches at my feet, but honestly, I find myself using duplicate bindings on my keyboard switches, pads, etc. So many years using a half moon switch on a Hammond makes the mod wheel feel natural. I tried, many times, getting used to a sustain pedal for Leslie speed, but always migrated back to mod wheel. When using my pedal, I found it easier to remove my shoes so I can feel the switches out. No more awkward looking at my feet while playing.

Ah, somebody else who takes his shoes off when playing!

I get funny looks from my band mates, but I do not feel so clumsy when bare footed. I must admit to extravagance and use one of the FC300 foot pedals for Leslie speed as I naturally rest my right foot on it, and I have another two pedals for swell and general volume duties in addition to five foot switches if needed. And then the FC300 patch pedals are used for patch selection, which means I can change patches in songs whilst playing (and with smooth sound transitions, the switch is seamless).

I made an example, just so you could hear the difference from one setting of B5. I could have adjusted EQ and such, but just let it ride as it was.

Thanks for posting that. I’m not a keys player but still have the original NI B3 and B3 II from back when I used them in sequences. Now that I’m getting back into music and looking for something more convincing, listening to your examples makes it clear IK is the way to go for the cab. IK’s organ sounds good too, so not much reason not to buy their bundled solution imo. The B5 with its own cab isn’t much of an upgrade to the NI imo… Thanks again for the post, it saved a lot of effort downloading and demoing!

Hi, I just discovered this page, great site, i´m also devoted to Hammond VSTs, owning Logic VB, GSI VBII Blue2 and recently IK B-3X, i´m loving everyday. I appreciate if someone can share IK-3x presets in native format as i dónt use Cantabile but Apple Mainstage. Thanks in advance

Hi Wurli…welcome to the forum. I posted the presets as a gift to Cantabile users who’ve helped me through my many rig setups, programming hassles, and life in general. It was never meant to share outside of this forum, and I trust no one here would do so. I spent many hours of research, listening, tweeking, and adjusting on all the Hammond plugins. With all due respect, I don’t want my hard work to be credited elsewhere, so I hope you can understand my feelings on this. This does not mean I won’t ever release the presets elsewhere, and become a preset-for-sale person like “Pluginguru”, or sell them to IK for REAL sounding presets, but not at this time.

This thread was created for all to learn and share ideas, and has attracted many outside Hammondites as the only REAL forum for Organ VSTs. Again, I hope you understand my feelings on this, and if I should change my mind, I will contact you.

Great Corky, I think making and selling presets is a good idea and a great contribution to the community, I encourage you to do so, indeed I recently purchased a wonderful preset pack for Logic VB3 https://soundcloud.com/mellontron2000/vorc and it worth every penny. Regards.

Hi again Corky, making AB test, I realized B3-X volumen/gain in weaker in the upper keys and at result it doesn´t cut very well through the mix as Logic or VBII, also it doesn´t favour left to right glissandos, in Logic VB3 there is a tonal balance in the setup to compensate this and everything sounds more compact.

I initially had to up the volume on the main page, but I do a ton of tweeking on the Leslie/Amp page. I do not use the resident fx, as they tend to eat cpu. I’ve been using my own presets on every Hammond clone for sometime now. Usually, the factory presets are mush, but allow you a starting point for your own creation. I explain on my presets that they are just a close representation, because every Hammond is different. As far as L to R Glissandos, I’ve not noticed a tonal balance, but I don’t use resident presets. Tell me which preset you notice it on, and I will check it out. I do not use Logic, but I noticed every Win Hammond VST has differences in tonal balance, which can sometimes be fixed with different models or tonewheel sets.

I’ve played many Hammonds during my life, and always found their nuances interesting, but managed to work around them. Leslies and their amps are different as well. Many of the Rock genre organs and Leslies are modded, something I can deal with in a VST, but not on a real Hammond. It is what it is, and getting a favorabile desired tone can be difficult on a house organ without modifications.

Hi Corky I agree default presets are crap for playing live, regarding the leslie, to me is the best virtual leslie in the market with the more accentuated and defined doppler effect by far, but needs lot of tweaking. I get more realistic results working in the mics side, with distance, angles and horn/drums balance, once i get there i can compensate the difference I was complaining. Thanks for your wise words.

Hi Corky, i´m working on presets for some songs of the Meters, i love that wide and deep leslie tone Art Neville gets, using leslie speed and modulation pedal. Finally i´m decoupling Logic and VB3-II leslies and engaging IK multimedia one, it gives me more option to tweak those deep and wide tones, i´ve been using Neo ventilator with korg Cx3 in the past, works great but to me IK is far superior for its multiple choices, i also prefer to Crumar mojo leslie.

IK is far superior for its multiple choices, i also prefer to Crumar mojo leslie.

Yes, IK is far superior. We had many lengthy discussions about it above. The Crumar was modeled in the VB3-II, although, IMHO, is really weak and not of the quality of original VB3 Leslie.

I was fortunate enough to see The Neville Brothers around 1995 in a New Orleans club…awesome. I also got to see John Mayall at The House Of Blues on the same trip. I am behind on several projects right now, but when I get a chance, I will send you some Art Neville presets for B3-X, if you want.

Of course i want those presets appreciate it. Thanks !!

Hi, i´m tweaking B-3x for rock /saturated tones, i aim to get close to my mojo clonewheel pushed with tall and fat pedal. I first discarded overscream included effect, i think IKM should have included a clean booster pedal instead, I also tried different third party tube saturation emu VSTs but got better results tweaking with different B-3x preamps gain and EQ, I discovered internal EQ-PG, helps a lot to push gain a little and at same time filter unwanted frequencies that makes saturated tone sound mushy when fast leslie is engaged. Regards.