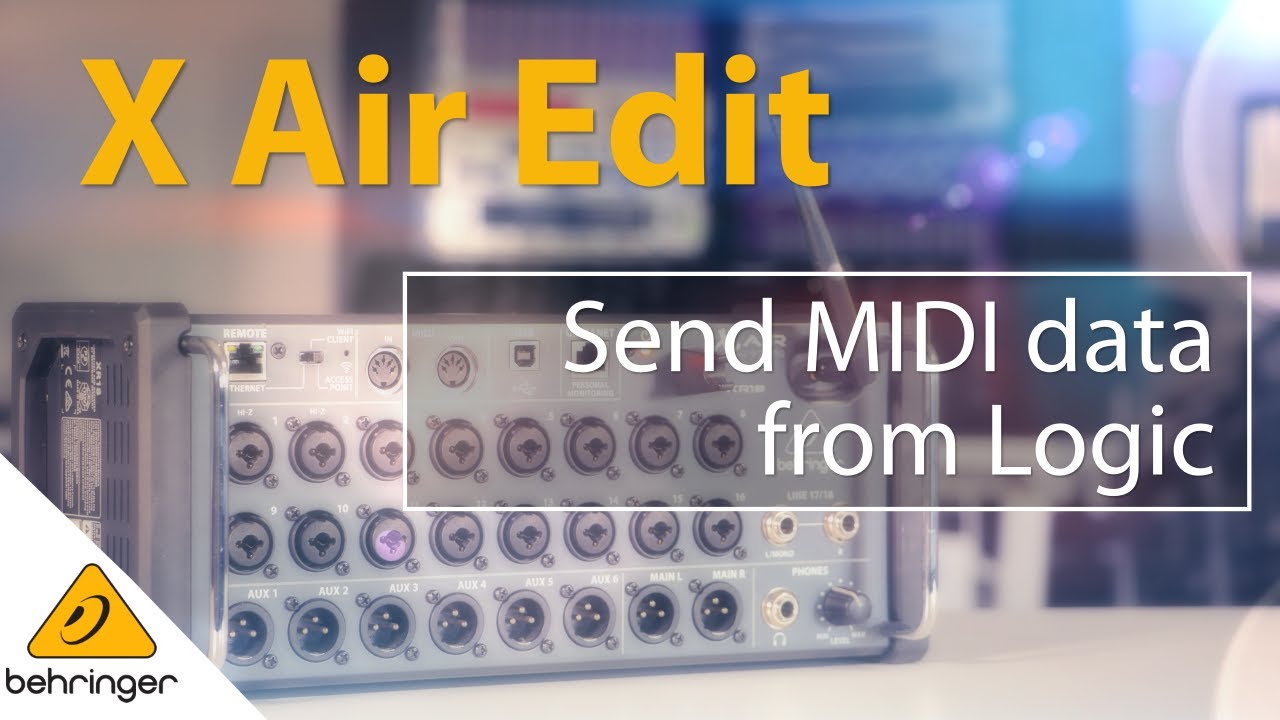 Does someone here use it in that way with C3?

Is there a break when switwhing snapshots? Arr there differences between those models?
Is there any things important to know before I buy it.
What do you thing about it?

A band I was in had an XR18. We only used it for recording and PA. I like the unit but never got a chance to connect it to a computer as an audio interface. I’m replying to recommend you also check out the Soundcraft ui24r. I’ve had hands on with this unit and will consider it along with the XR18 when I finally make my digital mixer purchase.

The Soundcraft Ui24R is a complete, rack-mountable, digital mixing and multi-track recording syst...

I haven’t used any of the MIDI functionality, but I have used it as an audio interface as 9 separate stereo pairs within Cantible and assigning each pair to a separate stereo plugin output and then using the interface to mix the various levels. I believe this functionality is only available on the the XR18 version not the XR16 and XR12.

I bought a UI24R last year to use it with the band for smaller gigs in conjunction with a RCF PA system.
The first impression at rehearsal room was quite good. All worked as expected but then there wasn’t any gig because of crisis and it is collecting dust.
I have updated the OS without problems and did some testing. Now I hope that we can go out again.

Sorry, I’m at work and can’t watch the video, but I can try to answer any questions you have.

We use an XR18 for 4 audio tracks and as a USB to MIDI interface. It’s been rock-solid for over two years.

I don’t use snapshots though, so I don’t know if changing the snapshot would interfere with the MIDI transmission. I use OSC via IPv4 through Cantabile (launch external .bat files) from the laptop to control the mixer instead of MIDI.

If you have any more specific questions, let me know.

Thank you for all your messages.
My interest is to drive it with cantabile bidings.

I make this work allready with a Voicelive Rack. Working very well with bidings making change the presets automatically while the media file runs. Markers helps here a lot.

I was really wondering if the r18 or the x32 will support it as good as the voicelive.

I have an X18 standard (not Rack) and it does MIDI scene changes on the fly, automated channel muting/unmuting and fading for my group. You will have no drop audio outs on the main and main FX buses on a scene change but will notice if you have drastic changes between the 2 scenes like say if you switch the scene before the bus reverb tails go away and decide to change the main bus reverb to a different setting. You will get some noticeable FX audio cut off on the insert FX when you change a scene because of the nature of series FX configurations like that. i.e. from a delay with feedback on the first scene to a chorus on the next one. It takes some experimenting to see what to avoid but I found it very forgiving. It’s been a great thing for my band anyway.

I use an XR18 with Cantabile, making use of snapshots and muting using MIDI commands. Cantabile un-mutes the stage mic between songs, for example. I also multi-track record the whole gig. It’s a great pairing.

Agreed-- mine is double-duty as both the band PA and my audio interface. Love it.

Just out of interest, a question to those who use the XR18 as an audio interface for live VST use: how is the latency performance of the XR18? Can you get reasonable performance out of it at 128 samples buffer in multichannel mode (not just stereo)? At the pricepoint, it could make an interesting piece of kit for live use just as an interface - and it could double as a backup mixer

I try to keep equipment separate, so I’m not looking to combine band mixer AND keys audio interface into one device, even though that might be attractive to some. But at the price, the little box looks pretty nice…

I handle all of the band’s inputs into my XR18, and I supply FOH and monitoring via P16Ms - plus it’s my keys interface AND the recording interface.

I can only say that I’ve had no problems with latency - it’s just not been an issue.

Seconded-- I don’t run monitoring like @The_Elf, but I run all the mains and inputs through it while using it an interface. I have a couple of scenes setup for whether we’re in a venue with a sound crew, in which case I just run it as an audio interface and send it up to FOH, or some venues we play with a totally crap house sound where we rely on the XR18 entirely. I walk up to the existing board, unplug the mains and plug them into the XR18, and all our sound is ready to roll. No latency issues have ever come up.

The driver for the UI24R is a multiclient driver. This means that you can run Cantabile, and, for example, Ableton backing tracks from the same computer to the UI24R. This is because the audio interface is not restricted to servicing only one program at a time. Further, the UI24R is not app based, but HTML user interface, so there is no latency. None. Additionally, the UI24R has snapshots with cues (snapshots within a snapshot). The reason for this is so that there is zero cutout or signal pause when switching cues (cues contain effects mixes, fader settings, eq etc.). Finally, the UI24R has dbx and lexicon processors in it with extremely clean preamps. I have used the UI24R since 2017, and it is rugged, sturdy and consistent.

My primary complaint about the UI24R is that the delay is NOT stereo. Very stupid. Soundcraft will not change this. Annoying. Otherwise, I love it.

I am not sure if the XR18 is multiclient. I know that it is app-based, so there is lag, but it has MIDAS preamps, and a stereo delay. Nevertheless, I am not sure if I am diverting from the topic of this thread.

Further, the UI24R is not app based, but HTML user interface, so there is no latency.

just to clarify: I was talking about the audio latency when using the mixer as an audio interface, not about any latency in reacting to user input (“lag”).

I’m not entirely convinced that having an HTML based interface is necessarily superior from a “lag” perspective - in both cases, there is control information (moving faders, pushing buttons) that needs to be captured on the device (tablet, phone) and communicated to the mixer, and status information (levels, configuration) that needs to be communicated to the device from the mixer and rendered there. Using an app or a browser to do the user event capturing, rendering and communication is a design choice - using a browser-based solution still means that there is a lot of code that needs to be executed on the tablet. There’s tons of JavaScript code in the Soundcraft GUI as well (that gets loaded and executed inside the browser), so you could call this an app as well - just a platform-agnostic one.

The main advantage of the HTML-based interface to me is that it is pretty much device-agnostic. As long as there is a browser available that comforms to the specifications needed for the interface, you can use pretty much any device to control the mixer - Android, iOS, Windows, Mac, Linux, whatever. That’s pretty nice - but it also means that you’re stuck with what the common denominator offers you in terms of functionality. It’s pretty impressive what the Soundcraft team have achieved with browser scripting.

In my experience, you can get decent low-lag performance from both - and you can screw things up on both… JavaScript is pretty mature, but native programming on Android or iOS can actually be more efficient, especially for graphical interfaces.

I’ve used Behringer and Mackie apps, and the UI24R web interface - on tablets with sufficient performance, I’ve got good responsiveness out of all of them. On entry-level tablets with less processing muscle, both the app-based solutions AND the web interface are sluggish.

I have an XR18 and have used it extensively in both recording and live gigs. It has been solid EXCEPT when using it’s internal wifi access point. I had lots of issues with it and eventually bought a NetGear access point and put it in my rack with the XR18. I also connect to the network from my PC via cable whenever possible.

I also have a XTouch (the bigger one) that I find to be good, but am considering one of the X32 (Producer?) boards because of better integration, the onboard display, and more faders than the xTouch for only a couple hundred dollars more than the individiual components. . Since I have invested in other parts of the XR/X32 system it makes sense to stick with Behringer as well.

I’m also in a band that uses the UI24r, and it has similar problems with the wifi, making the ability to use their app a bit spotty. I’m assuming a separate access point would help with that. There’s also some weirdness when recording to a USB drive (if you shut down the mixer before ending the session you lose the recording.

Yes on the built-in Wi-Fi. We added a stand alone router and never had a problem again with the XR18.

I use the X32 for everything…interface/mixer/monitoring much like @The_Elf. and I can do direct to USB recording. I mix using X32 Edit app. I have a feed I can drop for FOH or run our own PA. I also added a router. More than a few things connected to it including iPads

I use the X32 rack live.
The trick is to use what Behringer call “Snippets” rather than “Scenes”

A Scene loads all the parameters of the console and can cause a slight delay.
A Snippet only loads a subset of parameter changes you define and so is instantaneous.

I upgraded from XR16 to X18 and for the last 3 years I switched to an X32 Rack. Super happy with all of these Behringers. I tried using snippets & scenes via midi PC commands from a keyboard in the past but it proved to be too unreliable because Nords suck at being master midi controllers, however since starting to use Cantabile 3, I’m going to revisit using snippets live.