I have a question for those Who have this soundcard.
Is it possible to assign different sources on the output?

Until now I use a 4 outputs soundcard, so I can send on 1/2 my synth sounds and on 3/4 outputs a metronome for the drummer.

Is the babyface able to separate metronome and synths ?

Not sure if I got what you want: as it seems you already have managed to seperate metronome and synths (synths on main outs / metronome on headphone out).?

Or is this a scenario you realized with another soundcard today? In this case: sure, babyface can achieve this without additional hardware easily (this is my “small” setup btw.

Should you reflect on the question if more than these 2x2 outs are possible there are 2 options:

Babyface and Babyface Pro have 2 complete separate stereo outs. One being the low Z type and the other being either the Hi Z 1/4 " or 1/8" phone jacks.

Thank you for your 2 answers. Seems to be possible, in different ways.

Right now I’m using a quite simple presonnus soundcard (studio 96 with 4 outputs) … latency is suite good but I’d like more precision. That’s why I was thinking about rme.

I have an old fireface that is really great for stability and latency (can really support 64 samples with cantabile… Whereas my little
presonnus needs to be at 256 samples to play without glitches)
But the fireface stays at home. I need something for the gigs.
One costs 150 € the other 1000€…

That’s the price to pay to have quality I guess.

Just another option in between:
Digiface USB & ADA8200 => around 500€
low latency, stability, Total mix and an option to have up to 24 I/Os additionally…
This is another combination I use for rehearsals.
No Midi though…

I have a question for those Who have this soundcard.
Is it possible to assign different sources on the output?

I own the “Babyface classic” (not the newer “Pro”) - it has a main stereo output (XLR) plus a headphone output (1/8’’ phone jack). RME interfaces route signals via a pretty powerful mixing app called “TotalMix” - with it, you can assign customized mixes of input signals and computer signals to each output individually. It provides multiple logical outputs to computer software - the signals sent to those outputs are then fed into TotalMix and mixed to the outputs.

So if you use two separate logical outputs in Cantabile and route them to two separate Babyface audio ports, you can then use TotalMix to route only the synth sounds to the XLR outputs and the metronome sounds to the headphone output - no problem!

Or, as suggested above, you can connect a pretty cheap ADAT converter via optical cables to the Babyface, then you get additional 8 inputs and outputs via XLR. This is my setup - I have the Babyface stuck in a rack with the ADA8200, so I can route keys, guitars, and break music to FOH on separate stereo pairs (or just use 3 outputs and provide mono feeds only - just a different Cantabile configuration with the same song files).

Very interesting. Thank you.
Now is it worth to take the last babyface…?

Right now I can downsize the latency at 256 in C3…after that, glitches… always
But I would like to get a bit lower 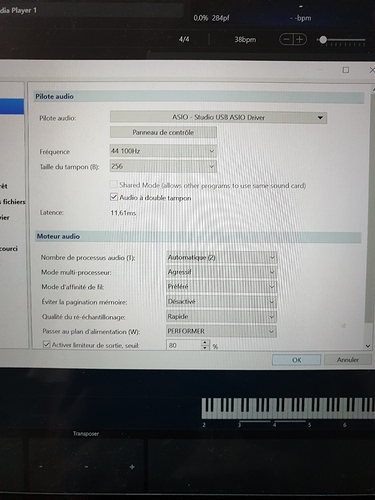 I use omnisphere (1 instance with 6 ch activated) kontakt (1 instance) and 1 media player. I reach around 50-70 pourcent process when playing. Sometimes temporaly 90…

Process lasso is helping a bit.

Do you get lower than me with the babyface with a same project? Do you think I will reach something better just by changing for the babyface?!
Or should I upgrade too? 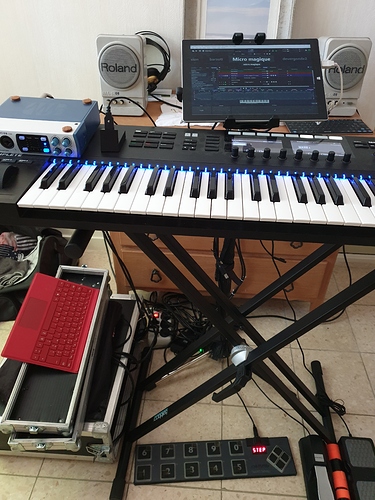