Win 11 first insider builds will be released next few days. Open to the public this fall.

Now for the real news…
PC must have TPM 2.0 support and Secure Boot! to turn on UEFI and turn off all sorts of Legacy.
I’ve not seen a single item yet that will improve audio performance…yet.
Lots of discussion all over the Web. Hard to distinguish who is right or wrong, but I am already dreading the forced upgrade when WIN 10 loses support.

Sticking with Win10 to the bitter end is probably going to be the right choice. I estimate 7 more years - they say 4 more years but people are going to fight retiring perfectly good machines, once they see that 10’s of millions of computers aren’t being updated they will probably extend security updates. Trusted Platform has been nothing but a headache in our IT support work. Now I get why they are pushing it so hard.

Why the need to update/upgrade every time Redmond tells you to?
My DAW is a tool, used to create and record music. I built it in 2008, tweaked the hardware and software until I had it working perfectly for me. Windows 7 has not been updated since 2010, and guess what? IT STILL WORKS the way it did in 2010, NO GLITCHES. If a tool works for what YOU need it for, there is no logical reason to continuously break it by updating.
The update-upgrade-update-upgrade-update cycle is only meant to separate a fool from his money.
I am more than happy with my 1998 Kurzweil K2500. It hasn’t had a software update in about 18 years and it still plays great!

P.S.: No I am not technically challenged. I just retired from 40 years as a software developer/programmer and IT networking engineer. So I know all about the “update/upgrade” cycles, been there since before DOS.

Windows 7 has not been updated since 2010, and guess what? IT STILL WORKS the way it did in 2010, NO GLITCHES. If a tool works for what YOU need it for, there is no logical reason to continuously break it by updating.

Agree in principle - as long as your DAW machine never touches the Internet… A large proportion of updates is mainly to plug security holes - security threats are a non-negotiable reality these days.

Also: as long as your instrument and effects plugins (assume you’ll want updates / upgrades for these?) and your DAW software (no update of this since 2010?) still run in the old environment, you’ll be good.

Still, there have been changes in the underlying architecture and libraries, e.g. graphics and audio subsystem, since 2010, and the new versions of your plugins may rely on these. You won’t be able to expect compatibility with a system that’s beyond its support timeframe.

To me, it’s a balancing act: I try not to risk my whole setup by jumping on the newest and brightest version on day 1, but I do get my feet wet with new versions on a test system for some serious time before committing my live setup to new main versions.

Overall, I am mostly satisfied with the direction Windows has taken since my early days of producing audio on Windows PCs - the change to Windows 10 particularly has been almost completely painless for me (except for some old hardware I had to retire due to lack of drivers, but that gave me a good excuse for GAS…).

So far, I don’t see the need to upgrade my production systems (live and studio) to Win11, unless Win11 demonstrates far superior audio performance. So I’ll probably live with my existing setup as long as MS supports it, and maybe experiment with Win11 on a business laptop or such. When I buy / build my next studio or live machine, that’s when I may put it on a Win 11 platform, provided Win 11 has proven solid in the meantime.

I’ll wait few months to make sure I will not loose hours of work.

Try it for sure but not on my audio system…

Major upgrades are often a leap in the dark. I had been Windows 7 “addicted” for few years: perfect knowledge of all the system-tweaks tricks, stability and a overall experience better than Windows 10, expecially in 2015 when it was released.
Last week I installed a W7 for a live music PC, I choose 7 'cause the audio interface drivers development stopped in 2009 (it’s a M-Audio 1814), and the same driver caused lots of BSOD to me on W10. Time for the whole tweak, twenty minutes.

However, my rehearsal PC (a 4th gen i7 laptop) works better with Windows 10. A lot better. My guess is the enhanced memory and drivers management.

Windows11? I totally agree with @Torsten. I’ll try on a business PC first, the music-PCs can wait.

It seems that many newer computers will not meet hardware requirements:

Windows 11 will leave millions of PCs behind, and Microsoft is struggling to...

At the heart of these changes is a security push.

Totally agreed. WIN10 has been mostly fine apart some of the “Microsoft knows best” attitude where an update will reset you tweaks and put on bloat ware you don’t (like this news/weather widget in the task bar). It is best to move forward, but to do so cautiously and let others who are more adventurous be “bleeding edge”. So I will stick with WIN10 as long as there are updates for it, then look to move.

Agree in principle - as long as your DAW machine never touches the Internet… A large proportion of updates is mainly to plug security holes - security threats are a non-negotiable reality these days.

My DAW as well as my live rigs are on the internet. My entire network is behind an 8th Gen Internet Security Appliance (firewall). I’ve never been hacked or infected. As I stated, I spent 40 years in IT as a programmer and network engineer. I can secure my systems.

I am not the one to “scream, I want the new version of XXX to run on WIn 7”. I jumped off the “keep everything upgraded” train years ago. And guess what? Every time I fire up my DAW to work on a project, it WORKS. Exactly like it did the last time, no surprises, no frustration, no wasted hours upgrading/reinstalling/wiping drives/re-activating. When I want to make music, I pull out the best tool for the job and make music. When I have a live gig, Cantabile and all my plugins work exactly like they did the last time I used them.
Just like my trusted 22 year old Kurzweil.
My point being, I view my computers and software as tools. Once I build my systems to perform a task, I treat it just like my power drill, hammer, and chainsaw. I fire it up and get to work.
Not saying it’s for everyone, it works for me.

As I stated, I spent 40 years in IT as a programmer and network engineer. I can secure my systems.

I won’t challenge you specifically here - but I doubt that you’d recommend the same thing to the majority of less IT-experienced users. Generally not a good idea to be on the web with a system that doesn’t have up-to-date patch levels.

I’m with Torsten. I’ve had no issues with Win10 and keep my systems up to date with the latest patches and updates. I’m actually very interested in trialing Win11 when it is GA. Like Torsten, I have a sandbox machine that I can use as a test bed without impacting my live performance devices.

Generally not a good idea to be on the web with a system that doesn’t have up-to-date patch levels.

This is very true, IF you are not protected. Throughout my career I have installed dozens of “secured” networks in a variety of businesses from medical practices to financial institutions to recording studios. Very few clients are “IT-experienced” users. They don’t have to be, that is what they paid me for. Once a network is properly secured, it never mattered whether the client was on Win 98, ME, XP, Vista, 7, 8, 8.1,or 10, with or without “security patches” their networks were stable and never breached.
As I said my practice may not be for everyone. I just wanted to let others know, there is a way to use these tools without the update/upgrade hassles. How many times has a pushed Windows update (update Tuesdays) broken the software you needed to use the day of the patch? Too often for me. Early on I realized that for ME, the update, upgrade, new hardware, update, upgrade, more new hardware cycle wasted more time than it was worth for the benefits of the “latest/greatest”. I’ve learned to use the tools I have and I am much more productive. Will I upgrade to Win 10 or 11? Of course. But not until I need to replace the existing hardware.

hey don’t have to be, that is what they paid me for. Once a network is properly secured, it never mattered whether the client was on Win 98, ME, XP, Vista, 7, 8, 8.1,or 10, with or without “security patches” their networks were stable and never breached.

At the danger of going off on a tangent here: after a long time as CIO (and responsible for cyber security), I have learned NEVER to trust in perimeter security alone - a secure network is nice, but an attackable client can be breached in other ways (email attachments, infected USB sticks, hidden sectors on the brand new demo CD… being one vector, funky websites with nasty scripts another, etc.). There are some things that you can protect from at the network level, others you just can’t without going to ridiculous lengths.

With all due respect to you and your profession of network experts: IT security requires a holistic approach across all levels; assuming “my network is hardened and I don’t need to bother about anything else” is an invitation for disaster, IMHO…

Now back to our regular scheduled program

Thanks for all the responses. I finally made the move from Win7 to Win10 Pro a year ago. Many problems in Win10, but I’ve wrangled them down just a few. My Win7 is still solid as a rock. Win11 may leave many newer computers unusable as @bartok2112 stated above. I am sure to stay on 10, at least until 11 goes thru the usual Microsoft instability issues in new versions.
I still have a well running XP desktop, but the problems we all deal with is newer versions of our favorite VSTi. From graphic drivers, to CPU requirements, we will be forced to upgrade, if we want our toys.
Yes, my XP still runs the programs I had on it, but I have G.A.S., so I am always looking at new toys. In my mind, I am quite sure a DSP-AI-Neural-Hammond is on the horizon for me to investigate. XP will not run it though.

I’ve only just managed to debug all my latency and audio issues between Windows 10 and C3 on my two Surface Pro gigging rigs, so definitely not in keen on undoing all of that hard work 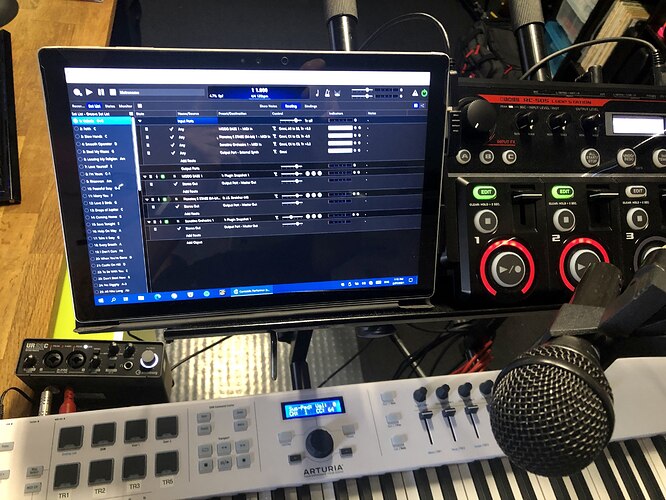 I am in total dispair about this. I just made the mistake of running the W11 PC health check on my machine, and it indicates that I can run it OK.

I don’t think the upgrade will be forced. If so, disabling one of the PC hardware, like the TPM from BIOS, your PC won’t upgrade anymore to 11.

Look… it goes to ELEVEN!
Right?