Over the last couple of days I’ve been helping a couple of jOrgan users figure out how route it through Cantabile for applying audio effects. We ended up using Jack for the virtual audio cable and I put together this walk-through video showing how it’s done.

In case anyone else needs to do something similar I thought I’d post it here:

This video link is not available for me @brad.

I would like to try recording my Cantabile output using Reaper. Yes, I know that Cantabile has recording functionality built-in, but I want to add tracks to an existing multi-track recording.

As I understand it, I need to use a virtual audio cable to direct the Cantabile output to Reaper. Some superficial searching found the link above, but I also found references to “Virtual Audio Cable”, “Synchronous Audio Router” and Voicemeeter. I know that @terrybritton has graciously produced a number of videos on using Voicemeeter, but I believe his goal was to produce live webcasts, so I’m not sure if Voicemeeter is the best tool for simply recording from Cantabile.

Any suggestions from this great community?

1 Like
Virtual Audio Cable for Recording Cantabile in DAW
terrybritton January 9, 2022, 9:57am #3

I recommend, first and foremost, that you start a fresh topic, as people reading this subject heading will likely bypass reading here if Jack is not of interest to them.

Try the free VB-Cable to see if you can wrap your head around it perhaps, but that requires Cantabile to be running in WDM (Windows Audio) mode rather than using ASIO.

A strength of Voicemeeter - especially Banana and Potato - is that it can translate as a virtual ASIO output for Cantabile, and deliver WDM to apps that cannot see ASIO, like Zoom and Skype.

Have you seen my videos on recording in Cantabile? Cantabile records to a single multi-track file that you break apart in some DAWs or by using Audacity to generate threads. I have a video on that process here.

Also, re-watch Brad’s video on recording in Cantabile below: 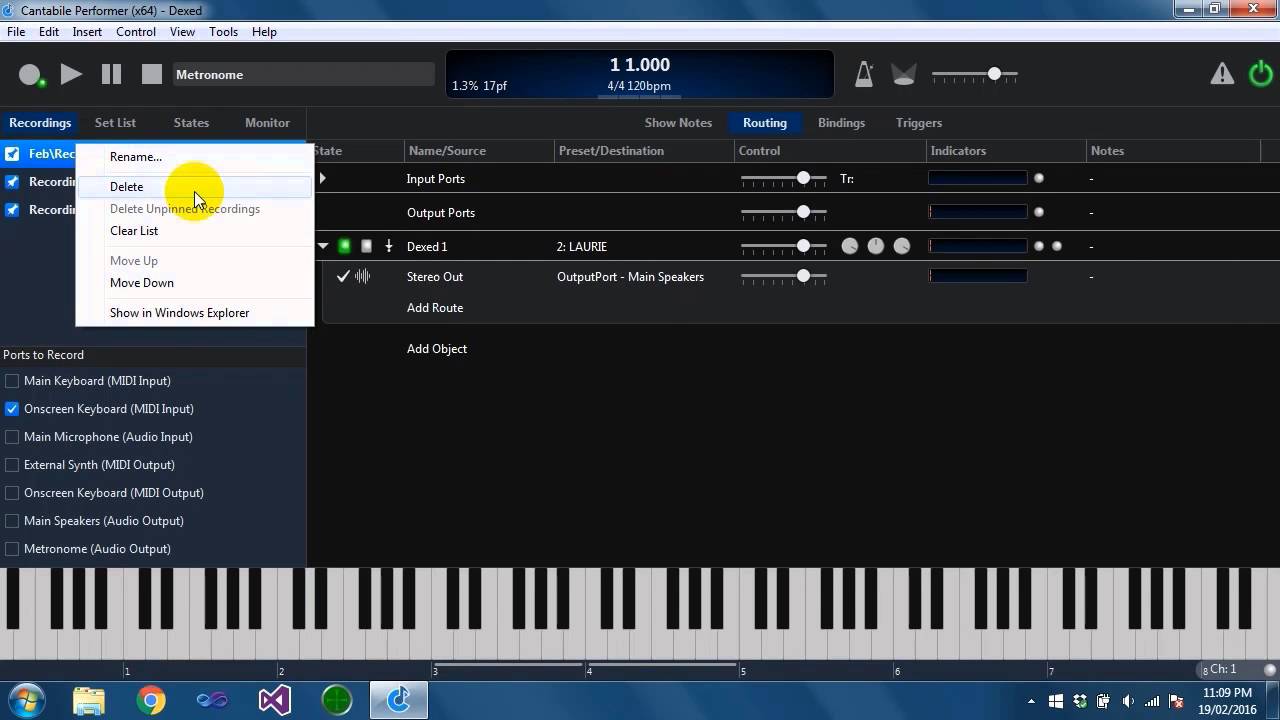 I do not have Reaper, but have found in the past trying to record on a separate DAW to be too much for my CPU usage. I strongly recommend sticking with having only one audio application (Cantabile in this case), or at most including Voicemeeter Banana using its built-in recorder.

I second @terrybritton advice.
The simpler your setup, the better.
I have been able to record Cantabile into Cakewalk using Voicemeeter, but I often have to restart the Audio engines of the different programs (Cantabile, Voicemeeter, Cakewalk) before I get a good sync between them (otherwise, you record digital noise together with your signal).

Anyway, the way I have done it is having Cantabile connected to the “Voicemeeter Virtual Asio” driver and Cakewalk connected to the “Voicemeeter AUX virtual ASIO”.
Then, in Voicemeeter, I have to switch on the “B2” button in the “Voicemeeter VAIO” mixer strip, for the audio to get into Cakewalk.
The Cakewalk audio arrives in Voicemeeter through the Voicemeeter AUX strip.
However, I would not suggest such a setup other than for experimenting. I’d rather produce a rough mix of what I have in the DAW as a backing track, then import it into a media player in Cantabile, then record the Cantabile output while playing along the backing track (EDIT: and finally import the audio recorded in Cantabile back into the DAW)

Due to the sync issues I thought I would try and record using a DAW. I thought that rather than sending the audio out (D/A conversion) from C3 into another DAW system (A/D conversion) using physical cables, it seemed that it should be possible to use a virtual audio cable to capture the recording directly into the DAW on the same machine as C3. Yes, I understand that CPU performance may be an issue, but a number of people reported about the low overhead of Reaper, so I thought it would be worth a try on my system.

I considered creating a new topic, but since I found this topic by searching for ‘Virtual Audio Cable’, I thought others would also find it here. In addition, I want to know about ‘Jack’, but unfortunately the video doesn’t seem to be available. @terrybritton can you confirm whether you are able to see the video?

I am not able to see the video within the above message, but I have been able to download and see it using the link

(right click on the video and select “Copy address”, at least in chrome).

[EDIT: Apparently now I can see the video in my own message! Go figure!