Is there a plugin or method to sync the master transport to a live performance?
I need to trigger an orchestral track in the middle of a song to play eight measures. I don’t want to use a click track for the entire song. But, I need the backing track to be in time with the live players.

I can use either one.

Thanks Jtoth I will think on it and get back to you.

I have some ideas and suggestions that might do it. For simplicity’s sake I would use a MIDI file because using an audio file requires binding to the track speed adjustment on the media player slot and is not as accurate. Record the MIDI file at the tempo it usually is performed at using a DAW or Cantabile set to that tempo on the metronome when recording it. The tempo value will become part of the MIDI file and will allow it to sync with the metronome tempo later when you want to alter the tempo.

On the media player you use to playback the MIDI track set the sync to Musical Slave.

Then create some bindings, one for the tap tempo for the metronome and one for the Transport Play.

So in use you would count in the song at the approximate tempo the backing track was created at and start playing the song. When you get close to where the backing track is coming up you tap a momentary switch type damper pedal a few measures to catch the tap tempo in C3. Then press the play button on the Main transport on the first beat song where you want the track to begin playing and it will play back at the last tap tempo you entered with the tap tempo pedal presses. Incidentally the tempo of the playback can be altered by re-tapping the tempo in real time. I set the tempo settings to Dynamic, it catches the measure tempo in real time from the presses no averaging. You can try the other 2 set tempo detection modes to see which one works best for you. 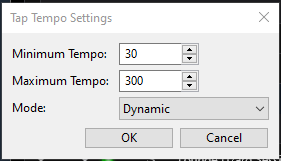 Thanks again, Dave. That’s exactly what I was looking to do. I have the parts recorded as MIDI and audio with correct tempo. I’ll give it a try tonight.

Dave, got it all working last night. Thanks again.

I have this all working fine in the “song”, but if I move the Media Player to a rack and “play” the Media file with a key binding, it is not synced to the transport BPM. I have synced the media player as slave musical, but it always plays at the MIDI file’s tempo. Do I need to “Start” the transport to play the file instead of “Playing” the media file? Or am I missing something syncing the song BPM to the rack? Should I start the transport at the beginning of the song and then trigger the rack’s media player when needed?

Do I need to “Start” the transport to play the file instead of “Playing” the media file?

Yes, that’s how it works here. But bear in mind your media player wouldn’t have play buttons when slaved so that needs to be checked on my end. Let me see but I think the sync into the rack is not something I’ve investigated. Will look at it and see or someone else might have some info and post. Have you tried the main transport to see if it still does sync still once in the rack?

I looked at it and it’s on the to do list along with other media player considerations so for now you would need to work at song level. You can join up and vote for it if you want on the Trello page.