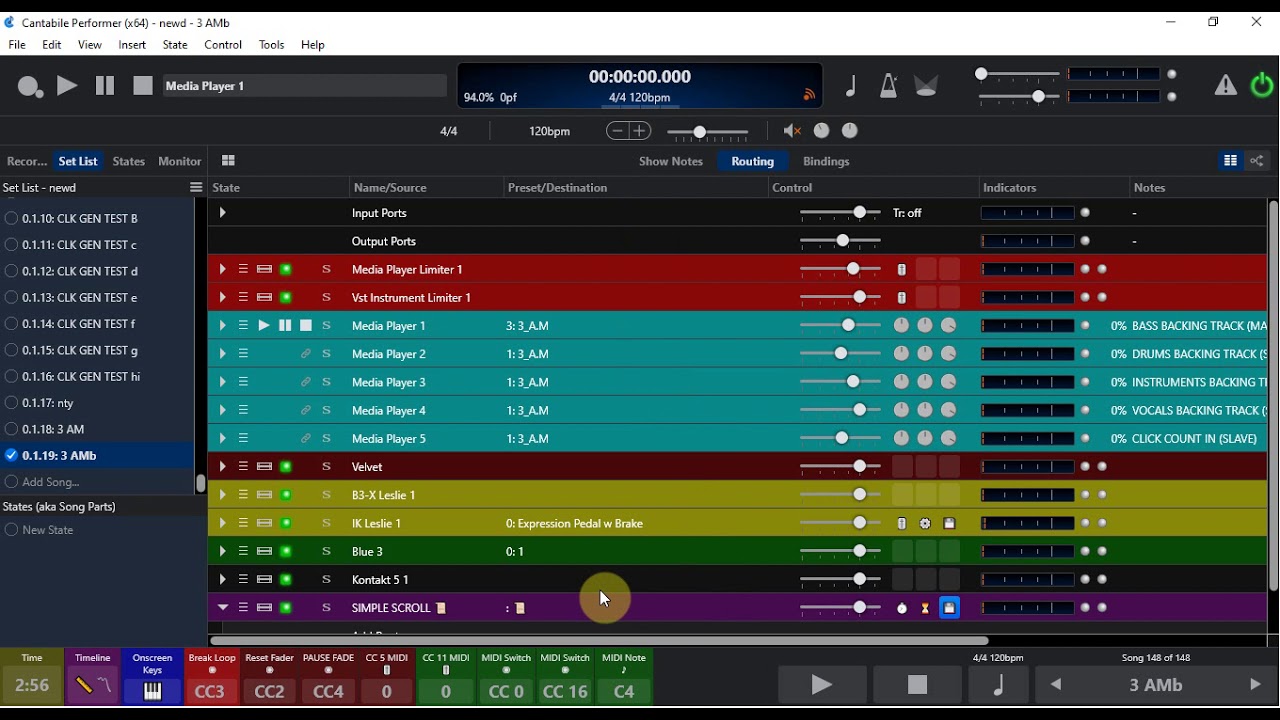 I have been working on another new approach to the Scrolling racks and Fader racks I’ve been making. Primarily I wanted to get away from using a media player and MIDI file to produce a means of controlling the speed of incremental events used when scrolling or sliding up or down a Gain control.

I set the rack up so it automatically scrolls the Show Notes with no other bindings required and it is tied to the main transport for it start, stop and pause commands. It has the same behavior as the SongBook type scroll function minus the inter song pauses. It will behave in the following way when using the Main transport

You can also use CC’s listed later on that start, pause, stop and reset the scroll event like the transport buttons in C♪3 do. You can select the disabled mode by changing to the second state with the Stop sign transport icon on it to disable the transport linkage and CC switch inputs on the scroll rack so it won’t auto-scroll when you don’t want it to.

So, in use you drop in the song, decide on the pre scroll pause time & enter it, calculate the song length & enter it, save your settings and check with the transport to make sure it times right for you

The easiest way to start off on the right foot is to unzip the contents of the .zip file to the C♪3 Racks folder location you use and it’s ready to go. It’s contents include a PDF manual as shown here.

In the Tools>Options>Miscellaneous>Advanced area make sure ‘Show Loopback Ports’ are checked!

In the picture above you see a description of the rack buttons on the rack that help make it easier to use I hope.

The hamburger menu mentioned in the picture above has a few different states that act as indicators of Stopped, Scrolling or Paused for the rack.

Once you press the custom button it opens to the dialog box where you set the delay value in the top box only leaving the bottom box set to 0 milliseconds. The value is entered in milliseconds into the value box so the rack is made so that (1000 ms in the delay box = 1 second of pre scroll delay time) so for example 10 seconds pause before starting scrolling would be entered as 10000 ms.

when done you press OK and then you can either edit the scroll time value in the binding above or close the rack editor using the Close Rack icon on the rack or the escape key on the PC keyboard.

The 2nd Custom button on the rack opens the setting box for the scroll time settings.

It is entered in to the top box as in the previous setting for the pre scroll delay time. The formula for the value is based on 1 ms in the box = 1 second of scroll time. So a song that was 3 minute 40 seconds would be 220 seconds which with no pre scroll pause would be entered into the box. When adding the pre scroll delay option you would subtract roughly that value from your song speed entry. e.g. song time = 240 seconds & pre scroll delay = 10 seconds so you enter 220 for the speed value instead of the full 240 seconds. This ensures the Show Notes will get fully scrolled to the bottom in the time the song tracks run. There is a little room to play with both the pre scroll and the scroll time values that help customize it for each song so experimenting is needed at first to figure each song out.

As with the pre scroll settings when done you press OK and then you can either edit the scroll time value in the binding above or close the rack editor using the Close Rack icon on the rack or the escape key on the PC keyboard.

You can also use the Windows Function Key F9 from the inside of the rack after setting either or both the delay binding values to update & save your settings and to automatically close the rack editor with one keystroke.

The following switches mentioned above are some CC numbers to use when operating the scroll rack remotely independent or in concert with the main transport with some foot pedals or MIDI switches instead.

CC4 is pauses and resumes the scrolling

CC5 stops the Transport and resets the Scroll

CC2 stops the transport, returns the show notes to position 0 and resets the Rack

My previous versions had only 127 steps which were interpolated into the 0.000 to 1.000 scaling used by the Show Notes position bindings. I decided to use that scale to test it but didn’t like the chunkiness of it and later expanded the rack to include high resolution scales that were achieved using MIDI Fine bindings and longer sequences of numbers in the value boxes. In the case of the scroll function I settled on 1 to 1 ratio, no interpolation or 1000 steps. In practice this equaled splitting the full active show notes content into 1000 scroll steps no matter the font size. This produced a much smoother response in the Show Notes scrolling action than the 127 interpolated action. Thanks to @SteveK for testing it and suggesting the pre scroll feature

Special Thanks to Brad Robinson for creating and supporting Cantabile 3 Performer and all the good folk of the Cantabile User Community.

Thank You for Your Interest

Let me be the first to say if you are considering a scrolling rack, designed specifically for Cantabile, this is it. I do a lot of at least 2 song medleys, and my memory isn’t what it used to be, and neither are the peepers, so having my chords and lyrics front and center, no matter where I am in the song is great. You can add notes about the song or patch or state changes, or whatever else is pertinent. It’s as simple as dropping the rack in your song, setting the time parameters and you are good to go. There are no 3rd party add-ons, just what you have on your notes screen. This is another solid piece of work from the Rackmaster himself. Keep 'em comin Dave

To all who downloaded there was a problem with the pre-scroll delay saving to the song file so I have updated the OP to have the updated zip file for download with the corrected rack. That should be the last detail I hope.

I am also working on a deluxe version that will have more features including the ability to have a SongBook type pause at different Transport positions. This would expand on the current Simple rack that has only a pre-scroll delay. Anyway, just overwrite the old version of the rack with the new one in the OP. Thanks again for the interest!

I am posting this for folks who prefer that the notes stay parked at the end of the scroll when the transport stops. The current version of the Simple Scroll rack has bindings to the Main transport that interact with the Stop function. The manual transport Stop command

When the transport stops because the track ended

The following version is set up so it ignores any transport Stop events.

I found that the value saving was not working correctly. I reworked the racks and they now are acting better and posted here in this thread. The problem was that I was using a rack reset command where it was not needed. Other than that they work OK here now. Sorry for any trouble and Thanks again for your interest.

Dave, out of interest, what (how) is the reset rack command, that maybe what I need with my lights issue…

I will check it tokay!
Thanx a lot!

Brad has added a resend bindings target, which is magnificent and when I get a chance to test it, I think it will answer all my issues.

I’m still not entirely sure what resetting a rack does, especially when you do it from the rack states ‘also reset the rack’ setting.

Cheers again for all your help.

Brad has added a resend bindings target, which is magnificent and when I get a chance to test it, I think it will answer all my issues.

I saw that and it looks interesting but i have not tried it out yet. I will get to it soon! Hope things go well for you Pierce.