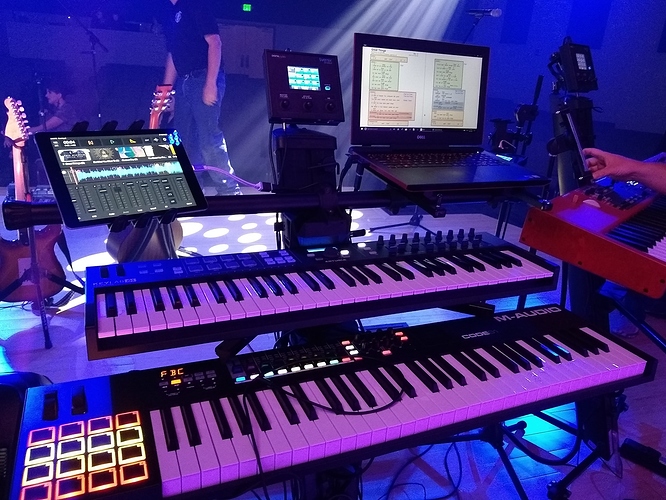 This is my current performance rig: An Arturia Keylab Essentials 61 and a M-Audio Code 61. I have an identical rig at home for practicing and programming. I have a movement disorder called Dystonia, which started in 2001. While getting back into playing has been the best therapy ever, the years of twisting fingers has caused some damage. I’m finding that the action on the Code 61 is just too heavy for me. I’ve adjusted the velocity curve, but it really is just the weight of the keys that can either hurt my fingers or make it hard for me to get the dynamics I need for playing a song because of the lack of control I have. The Arturia keyboard isn’t bad at all. Even though they call them “semi-weighted”, they are really kind of squishy synth action keys.

So… I’m considering replacing the Code 61 with something else. I’m leaning toward another Keylab Essentials. They aren’t that expensive. I’m barely using the pads and sliders on the Code 61. I use most of the pads/faders on the Arturia. I would lose the expression pedal on the Code 61, but could buy an Audiofront (https://www.audiofront.net/MIDIExpression.php). In our greenroom I use a Nextar GX61 and Alesis V61, neither of which I like at all, but it’s just for warm-up. I’m wondering if there are any cheapo light action keyboards that might replace the Code 61. These keyboards don’t go anywhere, so durability isn’t a big issue.

Any input is welcome and TIA.

How about a Keylab MKII 61? Keeps you in Arturia county? It has an expression pedal input as well!

Though I like the Akai MPK series (have an MPK225 and MPK249), they say semi-weighted and I would have to say those really ARE semi-weighted. I don’t know if the rest of their keys are similar.

I have an Alesis QX49 and that is definitely a light touch, though it feels a little spongy sometimes to me (rear-of-key stretch-spring style loaded). But they certainly are cheap!

Check the other topic. Never arturia again for me.

Arturia for me is dead. See my post elsewhere in this forum

The 2 Keylab Essentials MKII that I own and use every week are doing great for me. I may not play as hard as other players…

You must be a little insane.
And trying to mimic a real Hammond.
With some VSTs this is relatively easy

This thread isn’t about Arturia’s VSTs. It’s about the controller. I don’t play a lot of organ with what I do. Maybe 10%. And yes, I’m clinically a little insane.

This is what you need:
https://www.sweetwater.com/store/detail/SKX--hammond-skx-dual-manual-organ

Nahhhh.
I got this one. Much better. Viscount Legend. 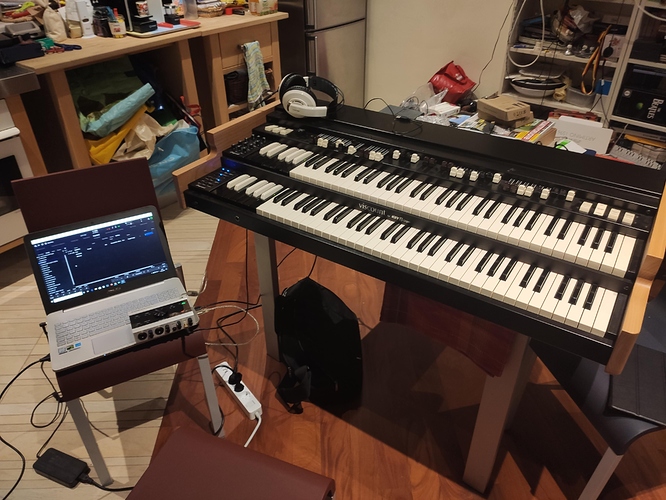 I just took it out from its bag; since my controller doesn’t work well, I will use this one.
It plays nicely!

WAAAAAAAYY too much $$$$ for me- you can get a real Hammond for less around here!

It was a used device. American gospel band had 3 shows here in Italy with it.
My usual dealer gave me a good price, less than 2k when list is 2,5k
I tested it in the shop connected to a real Leslie.
I fell in love immediately.
Without Leslie, with internal simulation it is less shocking.
Here a real one is much more expensive.