When carrying out some latency tests on my Boss RC-505 looper, I stumbled on what appears to be a seriously degraded waveform when echoing input over audio (Inst Input to Line Output) on the RC-505. Here is a summary of the waveforms: 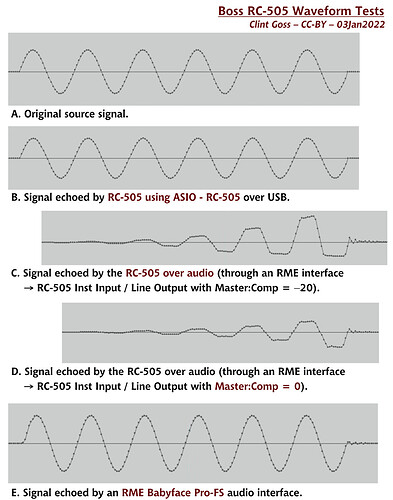 When I echo the source signal [A] over USB using the RC-505 as an audio interface [B], the output looks sample-perfect.

However, when I switch to sending the signal over unbalanced audio cables [C] through the audio ports (Inst Input and Line Output), the RC-505 produces a rather grotesque waveform. I though that the compression might be the issue, but [D] with compression=0 shows similar issues. No effects are engaged.

I did a sanity check in [E] using an RME Babyface Pro-FS interface on another host to echo the input, and the waveform looks normal.

For more details, here are the latency test results. In summary, using the RC-505 as an audio interface seems to carry a latency of about 35 msec vs. a round-trip time of 7.5 msec using the RME UCX II and an audio link to the RC-505. 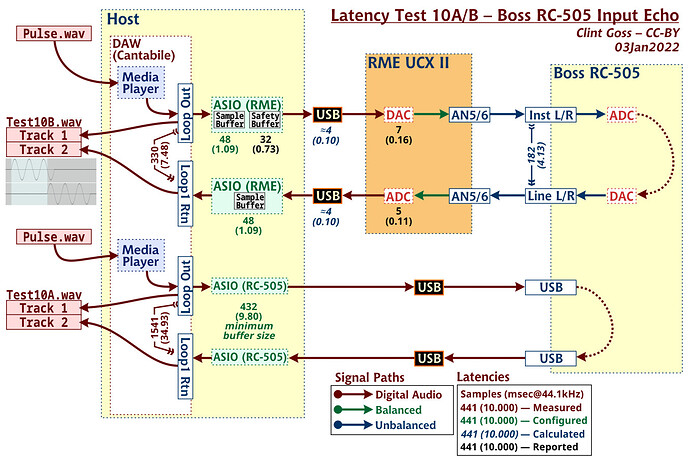 The RC-505 is not the last word in audio quality. The Mk 2 reportedly improves things significantly.

I’ve no idea what those waveforms above represent, but if it is a signal attack I could well imagine that the RC-505 uses cross-fades to prevent loop clicks - maybe that’s what you’re seeing.

I’m sure there are Facebook groups for loopers, but you could also try the Sound on Sound forum. The folks there are very knowledgeable, though you may struggle to find an expert on the RC-505 specifically.

Cross-fade … of course! That is most likely the explanation …

I’ll check out the SoS forums … Thanks!!