Does anyone have a way to have a song generate a random midi note on load? I’d need something that will generate a random note between and including C0-F0 every time a song is loaded. I tried the PizMIDIProbability VST to make a random CC then converted that CC to note via midi filters, but it’s randomness wasn’t random enough

Ideally, I’d like to do this just using MIDI filters in Cantabile. I’d even be happy with stepping through the 6 notes, but I couldn’t figure out how to get Cantabile to remember the previous notes when the song is loaded a second time.

If you’re wondering why anyone would want to do this, I’m using ShowCueSystems software on a 2nd laptop to play synchronized videos on TV(s) with the songs we’re playing. When we finish a song, I have Cantabile load a song that basically resets all the attached gear (lights; guitar, bass, and vocal effects; mixer channels), and also plays one of several animated band logos on the TV(s). It’s the animated logos that I’d like to randomize, but Show Cue Systems doesn’t have a random function, so I have to randomize it via Cantabile.

Thanks in advance,
Robb

I came up with this idea. You create a bindings group in the Background rack and set it up like below. It goes through a sequence of note on and offs with each of 6 Song changes (C0~F0) and repeats the sequence when reaches it’s last loaded note number (17). You may not need the note off bindings but I put them in case you do. You can put the sequence of note numbers in any order to you want with the comma separators, I just show it in a normal sequence.

Hopefully this solution or a variation of it might get it done. Cool problem

Dave, this works like a champ! I’m using triggers in the “reset” song to trigger the background rack binding. I’m good with stepping through the videos as a sequence instead of random, so this is perfect!

Thank you so much, this was driving me nuts!
Robb

I remember dave_dore helping me with bindings long ago, so he is a Trusted Source. I’m trying to figure out this solution though. The 6 notes would be C, C#, D, D#, E, and F (C0 through F0, 12 through 17). I don’t see how this would cause randomness though. Does it use a timer?

There was no solution for random so they are in order in my offering. The numbers can be entered in any order but would repeat the same way when the sequence loops. Sorry it wasn’t more clear.

Ah, I see. Randomness has always been a pizza-and-beer discussion topic. Even the lottery appears random to us mere mortals. The closest I’ve been able to achieve is the last digit(s) of the current datetime stamp.

I hope you all figure this randomness thing out. I will need such a utility for my series of stochastic composition concerts I plan to do that nobody will attend.

The best I was able to muster was using the same scheme as I had but use a number generator app that can randomize sequences of numbers and then I copy and paste after some editing in a script editor to remove the line feeds. The thing about randomizing numbers is that you have to allow for repeating the same number twice for it to be be truly random.

Here is an example for discussion or correction

the random number generator app on the left produces the random sequence with a comma separator for later use in Cantabile. I opy as is to the clipboard and paste to my script editor. 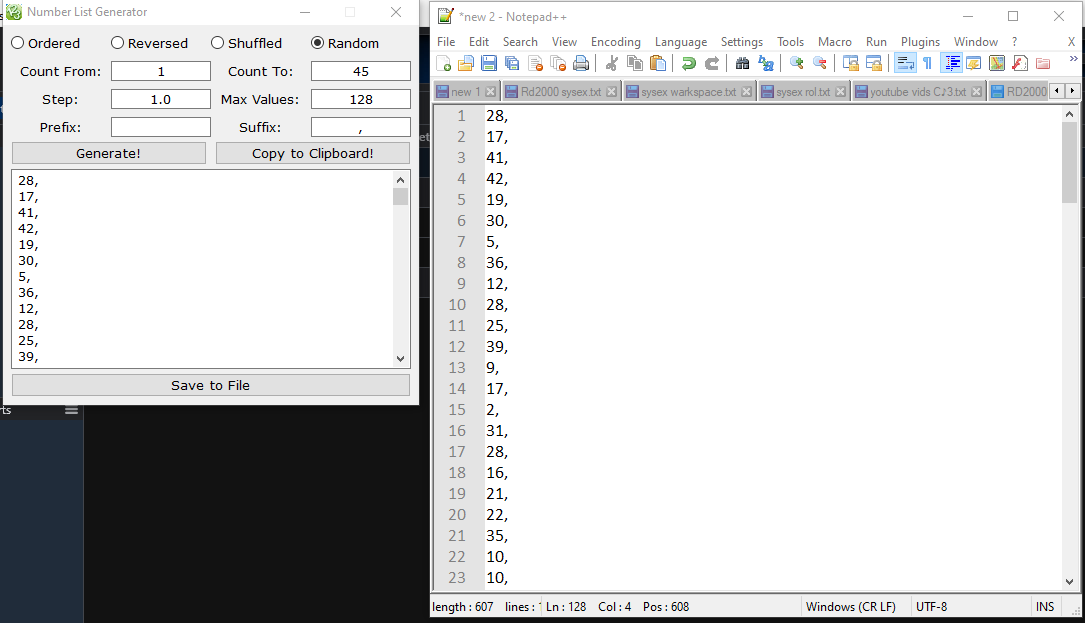 I use advanced edit to remove EOL and blank space and remove the last comma separator. 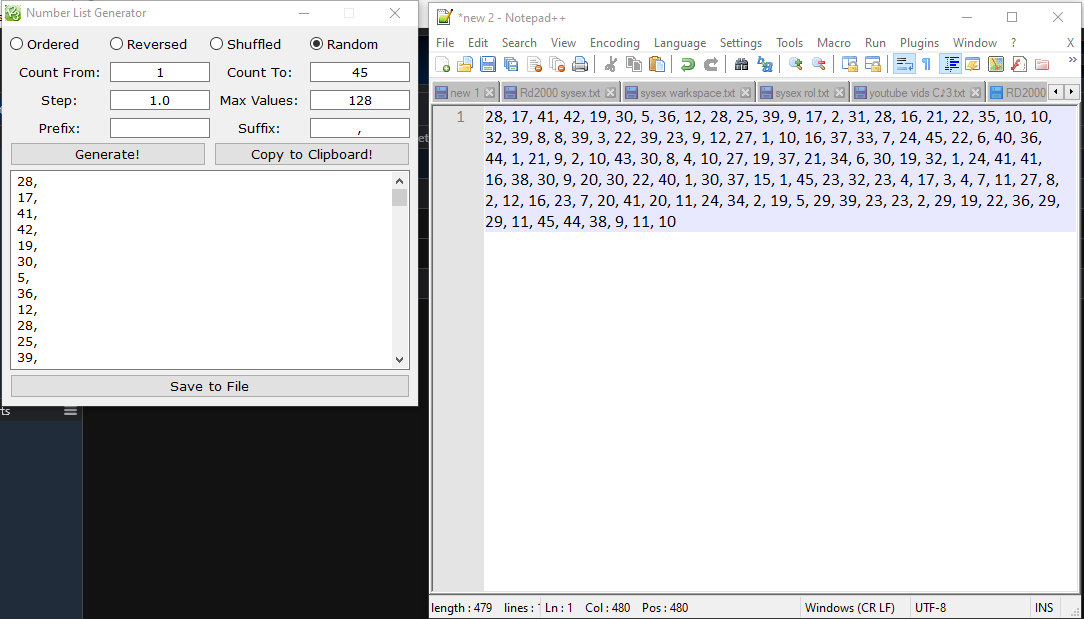 You could then paste into a looping target binding that say connected to a media player playlist or set list. Any random target you could route I suppose as long as it’s stepped using an on load or momentary button for the source of the binding.

Anyway that was my best shot at it, feel free to pipe in if you have other apps or ways that might also aid in this area.

In my case, I have decided to employ three of my cats and just let them walk on the keyboards.

I take it you plan to map to notes? (that sound like cats

Definitely will. I found this inspiring: 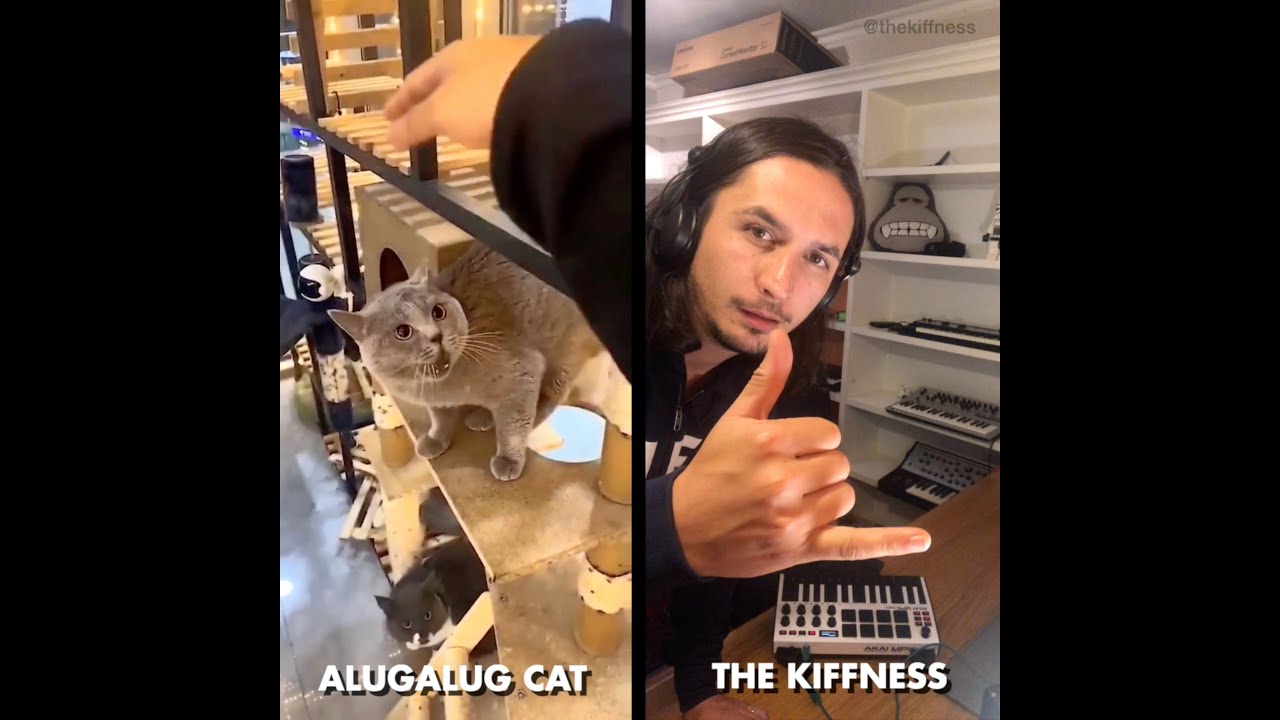 I would call it “Catwalk”.

As did I, an inspired collaboration.

Wouldn’t that defeat the idea of a stochastic composition? Thus, a random generation couldn’t be an inspired one…or could it?

Could we count the manual conducting by the man as inspiration for the cat? questions leading to more questions …

But is the cat actually inspired, or was he merely making his way to the litter box? Was mother nature inspiring the cat to “go”, or was the cat simply directed to “go”?

What happened to this thread??

My original plan, using PiziMidi Probability plugin to generate a random CC then converting that to a note via a Cantabile filter might work for you @terrybritton.

It wasn’t random enough for me because I only had 7 samples to choose from, but maybe it’ll work for your purposes. Let me know if you need the PizMidi .dll file.

Robb, I’ve got the PizMIDI set including that one, I think.

I thank you. My cats thank you. However, my audience MIGHT curse you!

Corky, there is NOTHING more stochastic than a cat. That video merely reminded me of that fact.

Post the URL for the show, the least I can do is suffer through it with everyone else