After 25+ years of stage pianos and various synths / organs, etc. I’m switching over to a PC setup for gigs (hand was forced after my Roland RD-800 packed up). Probably like others, realised I’d already got most of the software (home studio), figured a PC would have more clout, and I might not have to lug a stage piano to rehearsals. I can also configure and play at home without having to empty a room beforehand.

Based on research and recommendations, I’ve chosen Cantabile and after a chat with Brad have confirmed that it should do what I need it to. Now…

Rather than a laptop, I’m building a rack PC from scratch and flightcasing it (looking at buying most of it over the next few weeks). Mainly because beer, dark stages and clumsy musicians, but I’m also looking to streamline setup and teardown. I’d ideally like to know if my PC spec should be enough to run Cantabile snappily…

I’m building the case from a project box (more on that later), and have missed off things like CPU/case fans which are accounted for.

Whilst I do play in bands that have setlists, and configured songs, by far most of my stuff is rock and roll / rhythm and blues that is more busked and doesn’t have predefined sets. With these I tend to use probably 5 or 6 sounds tops, but need to switch between them fairly quickly as if I were selecting arbitrary patches on a keyboard.

I’d run this by Brad, thinking I’d set each instrument up as a song in a set list and jump between them, but he’s suggested it’d be quicker to put them all into the same song and switch via states.

The questions I (finally) have are…

Many apologies for such a long first post - it’s the culmination of about 3 month’s research and notes, and I’ve missed a lot off. I’m trying to hit a sweet spot between power/speed and heat/noise.

A few other notes (which explain a custom-built case)…

Very long story short, I’m building a self-contained unit that should be quick to set up and reliable. Front off flightcase, plug USB into keyboard, IEC into mains and XLR into PA. Plug in screen and away.

If you’ve got this far, thank you!
Take care, Simon

Would a 200W power supply run all this? I can go more, but there’s a reason which I’ll go into later

You might need a powered USB hub to augment your rig but 200W should do it assuming no spin drives and low amounts of USB power required for your keyboard and audio interface.

Would 32GB RAM be enough? The motherboard can go up to 64

Easily! I never use all 32 GB on my set up running preloaded sets with hundreds of songs and dozens of VSTis. I average around 16 GB on a setlist like I described FWIW. Ivory, UVI ravenscroft and B5, Ik Modo Bass and B3-X, U-he Diva, Echoboy and many Xpand2! rompler sounds.

Would the i5 CPU be fast enough, bearing in mind I’ll strip down Windows and install nothing else

The short answer is yes, you have plenty of speed and cores to spread the load.

Hope the switch over into Cantabile goes well!

I think your pc specs look fantastic.
As for VSTs:

I do not have nor do I see a personal need for Komplete 11/12 stuff. have enough alternatives already. Massive X is still on my hitlist though…

Simon,
I use an Asus notebook with i7 old series (3 years ago), 16 gb Ram and a Samsung SSD, NVMe 512 GB, plus a 1 Tera Sata SSD.
Using live Kontakt, Diva, Pigments, Xpand, Arturia v7, Hammond B3X
Never an issue on software or hardware.
Your choice to make a custom rack pc with flight case is hugely interesting.
I am interested to see your engineering.
If you can publish some pics and drawing it would be extremely appreciated.

Hi guys - thank you very much for that. All good food for thought - I’ll be looking into plugin options more in the future - I’m just going with what I own at the moment.

I like Pianoteq as it is has a light footprint. I’m fully open to ideas though for the EPs. I have beaten a beaten up Wurli and Rhodes 73 at home (that my back wouldn’t thank me for gigging), but I have good Ray and Richard Tee patches in Pianoteq (Ray Charles, What’d I Say, Richard Tee - everything I love about Rhodes). Thanks for pointing me in other directions though - it’s so easy to get sidelined.

I might try it with the power and see if I get away with it if the spec’s OK. I’ll be building it on a bench with an old power supply, so I can monitor the draw. Reason I wanted to keep it low is that the UPS card I was looking at runs at 160 watts (with a bit more for 30 seconds). Certainly not the end of the world though if I need to either up the power or add a powered hub).

I’m really encouraged that it will work fine though, thank you! I’ve been testing it on my work PC and home laptop, but not in anger they seem fine, but there’s bedroom fine, and stage fine…

I’ll post up some pictures in a moment - I’m currently working on a 2U Penn Elcomm project case and a custom cut front panel from them. Started with Derek Cook’s documents from this site, then got metalwork and PC friends involved (I work in IT), and it’s all got a bit out of hand.

Stand by if I make a mess of this - not sure of uploading yet. Front panel design from Christmas Eve. It’s changed layout slightly since then, but only in layout.

Internally there are three zones - power/exhaust, motherboard/intake, audio interface. They are separated by small firewalls, which I’ll illustrate in next post.

Ignore the branding - I was just messing about before Christmas. On the rear of the case, I’ve put a +48V phantom switch for the inputs, and wi-fi antennas from the motherboard. Some other audio interfaces have the phantom switch on the front and are smaller. I know the audio optimisation document on here suggests turning wi-fi off, but when at home I figured it’d come in handy. Plus our band has a router on stage. If it can connect to that, I can connect to its web interface and control from smartphone.

I’ve tweaked it since to give more room to the motherboard area - it had about 7.5mm clearance either side. Not the end of the world, but a little tight.

I am currently thinking of mounting this in is the Gator “Laptop And 2-Space Rack Bag”(https://www.gatorcases.com/products/racks-portable/laptoprack-cases/studio-2-go/laptop-and-2-space-rack-bag-gsr-2u/. Current thoughts - put it next to the keys on the floor, open the top and plug up, pull the monitor out already connected and go. Cables and pedals stored. Take it home at the end of the night. 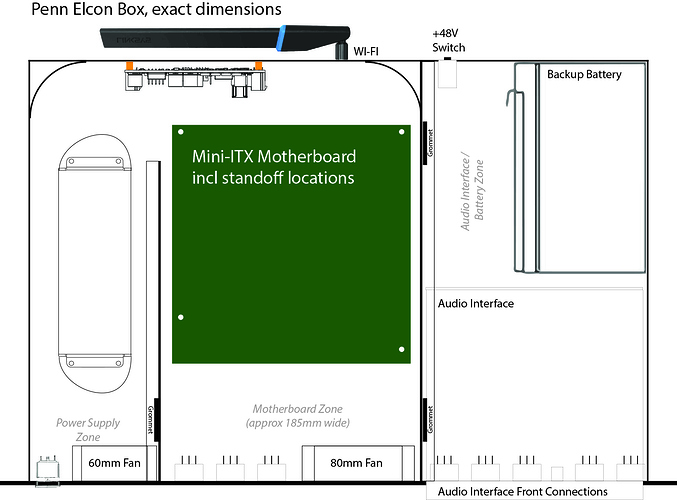 HDPlex 200W passive power supply, with mock up cones around the edges to route air
Two firewalls and curved interiors to divert air over motherboard and back out the front
UPS board mounted to rear panel
Random backup battery on right. Half thought through sub-project so far

Hope this makes sense, and please do let me know if I’ve made any stupid errors. Let me know if it’s confusing. Like I say, I’ve made a few tweaks since to give more room for the motherboard.

Forgot to say - no spinning drives. Everything on M.2 drives, but might need to be wary of plugging external storage in if power is on its limit. I can switch to a 400w supply, but that would mean ditching the UPS for now, as it’s an off the shelf card and I don’t know enough about the tech yet to fabricate something that would support that power draw.

You should be fine. I use an i7 8700k with a 250W CPU. Works good. I’ve checked the consumption. It goes up to 230W. So it depends on the efficiency of your PSU. I have a M.2, onboard gpu, two midi devices connected to the mainboard and an Audiointerface (Scarlett 8i6) connected to the same PSU.

BTW: I’d recommend using a ACDC PSU instead of the HDPLEX. I personally don’t trust those things… Same with picoPSUs…

Thanks @FantomXR - the benefit for me of the HDPlex was a split between the AC-DC and motherboard connections - I could set up the UPS card in-between. Nothing’s in stone yet, so more thoughts required…

How about USB ports? It seems your front panel has none.

It might not be clear. The six D-Type holes in the centre…

Automatically just mapped most available USB ports from the motherboard to the front panel. Haven’t really thought that through yet, since if you used all of them it might drain the PSU. In the UK, Cliff do two USB ports in a nickel XLR D-Type socket. Figured that could take more use than a motherboard’s socket (and be easier to replace).

Very quick Photoshop of the front panel with connectors/interface overlaid. Figured this might make it easier to visualise, since I may have skipped several weeks of sketching in between explanation and draft panels. Something like this is what I’m thinking of (still Christmas sketches, a little different since but not radical)…

Currently thinking of a Roland Interface as it’s smaller, has +48V switch on front and doesn’t have an input/daw mix knob (not required for this purpose).

Obviously it’s a homebrew job, but hopefully should be resilient enough to gig. Have plenty to ponder on about power supply and USB thanks. Plus instrument choices further down the line.

Thought long and hard about a PCIe audio interface inside rather than a big cutout, but having its levels set within its config rather than physical controllers was too much a compromise. If it’s possible to assign a knob to - say - input level, do let me know - I’ve not used them before.

Do you have good solder skills?
If yes you could take the same Audiointerface as I do. I have created adapter PCBs. So you would have to remove all connectors from the Audiointerface itself and put those adapter PCBs on top of them. After that you have to connect the those PCBs through flat cable to other PCBs with XLR inputs and outputs that I’ve created too. But … it requires good skills and knowledge about electronics.

My solder skills are a bit rusty, but fortunately I work with and have friends who are much better. My knowledge of electronics is good though. I’m very interested in this, as the audio interface side is a bit of a crowbar that I’d hoped to integrate internally properly. 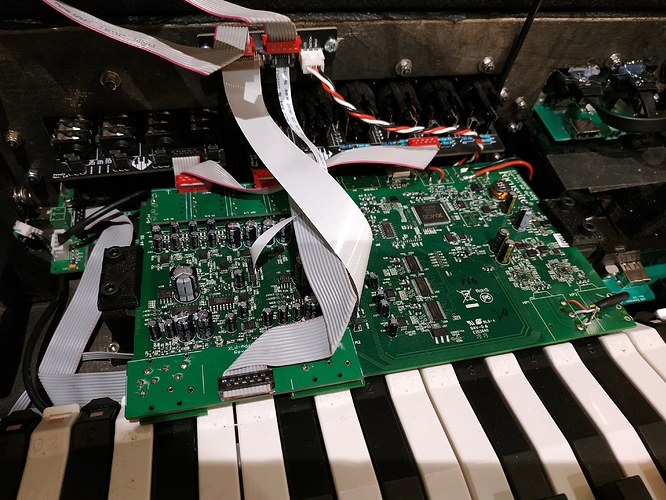 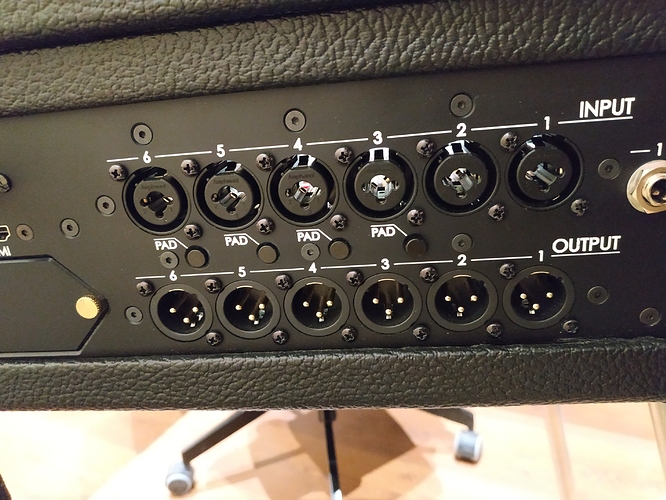 VERY interesting! I’ve been going through some of your posts, but haven’t come across that rear panel before.

Forgive some potentially silly questions - this is using a donor interface, yes? RME? Do you have any manual controls over input/output levels?

All of my assumptions so far have been about butchering an XLR interface, and I’d got as far as re-patching rear connectors and switches. I’d much prefer to switch to a system where the interface is internal though.

It’s a Scarlett 8i6 3rd generation.
Normally you have a master volume pot on the interface. But since I don’t need it I’ve bridged it…

Ahh, thank you. Interesting. Not sure I’m ready to leave a master volume behind just yet, but I could link to it.

looks impressive - just interested: did you have any shielding / interference issues running the interface without its metal case? I’d be worried of suddenly receiving Radio Eriwan on-stage…

But of course you have to take care of good and enough ground connections.