I still need to check out Arturia’s latest OB-Xa V for comparison.

Indeed, the effects and modulation sections of the Arturia version make it a standout as well.

Tried it today. It does sound yuge! And I like that it can be something like a CS-80 with the onboard effects and step sequencer. It sounds fatter than the Arturia CS80V- makes me really hope Synapse’s next VSTi is a real CS-80 model. I’m starting to think Obsession and Legend could cover 80% of my synth needs! What I want to hear is that opening note from Tom Sawyer. No virtual synth has really made that sound yet.

All in all it’s probably wise that they are’t pictching it just as a retro machine but gave it the ability to do big EDM pads and basslines. More people are into that right now…

What I want to hear is that opening note from Tom Sawyer. No virtual synth has really made that sound yet.

I may be mistaken, but very sure I heard it in Omnisphere on a 3rd party preset. I was very impressed.

I need to test again Obsession, more deeply this time, not only listening the presets.
A thought on Arturia:
Maybe it’s only a pseudo-scientific law I named “the Arturia effect” (Any Arturia synth can emulate any other Arturia synth). Since initial V series I could get the same sound using the MiniV or the CS-80V or the ModularV. Just minor differences. So I stopped throwing money away in V-clones.
I heard PianoV, HammondV, RhodesV etc., recently. Ludicrous toys.

Yeah, the pianos and organs are bad. Well, the Hammond. The combo organs are ok. The main thing about the CS is the architecture of the thing. And they modeled the built-in effects well. But at this point just about all Arturia’s analog synths have been modeled better elsewhere. I think the digital synths are fantastic.

I messed about with the Obsession demo last night, and I was very impressed as well.

I had an all Synapse VST setup, with Obsession and Dune layered (why not?) and Legend providing the lead, and it sounded massive (no other effects outside of the VSTs), and my DAW PC hardly broke out a sweat running all three. Will check my “demo” again tonight, but I think I will be pulling the trigger on Obsession.

I think between Synapse, U-HE and also UVI Falcon, which I really like, that is the powerhouse of VST synths for me right now - oh and not forgetting Omnisphere just in case you need something not covered by the above?.

I think Fred hit the nail on the head as well: Arturia V is a good collection, but others are bettering their analog offerings these days, although I do have a soft spot for their Matrix 12 still. Their Hammond is still “meh” to me, but their Farfisa is pretty good (especially when passed through an Echorec emulation).

I was just playing around with Obsession. I agrree: really nice pad sounds, partly very impressive and it should fit smoothly into lots of arrangements.

Then I tried some of the typical 80ies sounds and was annoyed: everythings sounds “nice” and “smooth” but what Im missing is the grit some these sounds are famous for. To give an example: I was no way able to get nearby the filter resonance of the 4-pole that OP-X II can produce for Rushs Tom Sawyer. In comparison every setting I created sounded lame (and yes: “nice” again). Those of you owning OP-X can easily prove this.

So my question: is there something I`m missing (f.e. a hidden gem I have to activate to get there?)

Thanks and regards, Volker

That’s interesting. I thought initially that it sounded fatter or bigger than OP-X but I haven’t compared the filters to each other. Some of it may just be Obession’s great effects…

I only have the demo but I found out quickly that the true power is under the hood in the individual voice parameters. I took a quick look and listen to the Tom Sawyer bass patch from the OP-X II and the Rush track and I agree that none of the demo presets on Obsession get there but after copying the OP-X II settings and then tweaking the filter settings for each voice to closer match the main filter settings it sounded much closer and I felt way deeper. I didn’t get it as grainy as the OP-X II patch but it was way closer after those tweaks. i also turned off the reverb and chorus but left the delay. 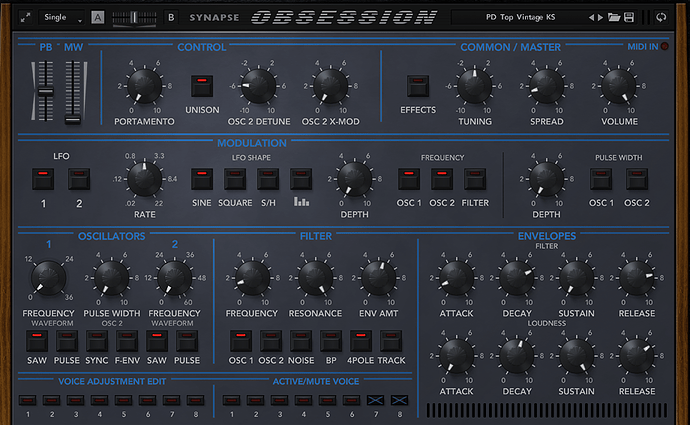 Voice 6 example tweak only the filter was adjusted

I am just getting into it but the under hood stuff looks critical to building the patches and I’m sure Tom Sawyer is in there real close with some tweaking. I started with the Top Vintage KS preset to start with.

Wow, thanks for your effort.

I started in a similar way with transferring parameters from OP-X Pro II but my resuits were far from the OP-X patch (not saying OP-X is close enough to the original but definitely closer than my results with Obsession),

I will definitely have a look on your proposal.

O.k. I spent some time on Sawyer now following your hints and you were right: it is obvious you can get much closer to OP-X Pro II. Especially the individual voice settings do a lot here. I had always the impression there were more than one resonance peaks swooping around on OP-X Sawyer sound which wasn`t the case on Obsession. After tweeking ramp-times, resonance, env amount etc. individually at got much closer - great!

At least an effect persisted I would call brightness: whatever I did (lowering filter frequency, adjusting presence) I was not able to get this “sparkle” effect out of Obsession.

Then I remembered @Neil s comment concerning soundcard frequency. I had tried to encrease frequency to 88,2kHz and found OP-X sounded much brighter (never heard such an effect so clearly before). So I had the idea that probably OP-X Pro II is limited in bandwidth. In consequence I placed a Q3 unit on Obsession and dropped high frequencies for a good amount. This brougt me much closer to the OP-X sound.

Atm I ask myself: is the limitation in bandwidth probably an issue that is also responsible for the original sound of OB-Xa??

(components partly were not as performant in this respect as those used now a days…).

Whatever: final conclusion: some effort and a good equalzer get Obsession everywhere. Good this is solved, time to pull the trigger

Thanks and regards, Volker

Thanks for the post, I am very tempted to purchase as well, it is very thick and alive! I must try the increased sample rate as well to experience the full deal …

Atm I ask myself: is the limitation in bandwidth probably an issue that is also responsible for the original sound of OB-Xa??

(components partly were not as performant in this respect as those used now a days…).

Remember, Obsession is based on a OBXa. Tom Sawyer was recorded with an OBX which had different modulation. I believe the OP-X II Pro is supposed to be based on the OBX. This is from the Wikipedia page for OB-Xa:

“One function that did disappear from the OB-X voice architecture was cross modulation, or frequency modulation of the first VCO with the second VCO.”

Over on the U-he forum (this was a while back and don’t know which post), a poster was talking about why the Tom Sawyer sound is so hard to emulate, and cross modulation was brought up.

I have never played any the original hardware though, and I don’t play in a covers band. I am just happy at how awesome obsession sounds.

I sent a request concerning different statements about the number of activations (EULA=3/manual=2) and asked for clarification. Synapse audio replied within an hour and this is what I got back:

You can install on 3, must be a copy+paste error from a previous manual. Note this is true for all our plugins, Dune 3, The Legend and Obsession.
We will update the manual accordingly.

So no restriction for 3 activations and the same is clarified for Legend and Dune 3!

“It should be noted that one of the major differences between the OB-X and its descendants is that the OB-X has Oberheim S.E.M. filters while subsequent OB synthesizers have Curtis ladder filters which have a sometimes subtly but completely different sound. The OB-X is more purely Oberheim.”

Probably part of it as well …

You are just a few steps ahead of me lol

I feel myself falling into this …

This is now marked in my calender: first time faster than dave!!!
Party!!!