This is of importance to all the MIDI geeks

around here so I thought I’d post the new graphic they are using to block diagram the new architecture. 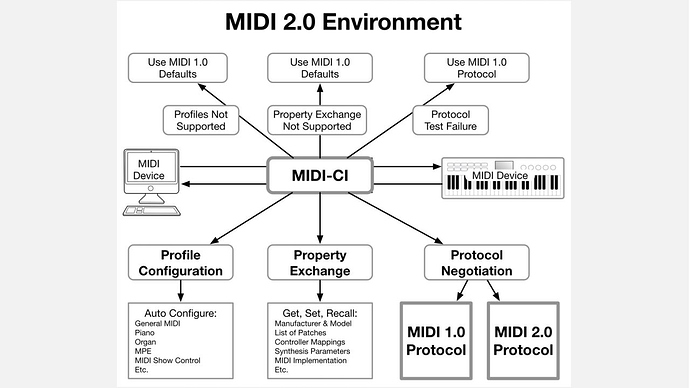 I’m going to have to read up …

Amazing to think that MIDI 1.0 is fundamentally unchanged since 1983

I attended the 2 Workshops of MIDI 2.0 at the last Namm. It looks quite promising for many, many years. Even some of the speakers were surprised by other’s presentations!

Would be nice to run it on IPv6 and make it super easy to go over 100 meters or WiFi natively.

I put in pending state a possible purchasing of a controller and an audio board. Maybe we will see 2.0 hardware devices soon…

Don’t hold your breath on that… The new Roland 88 controller is 2.0 ready while its firmware isn’t ready yet, but I wouldn’t expect many valuable devices before many months. (what would be the point to get a 2.0 device if its the only one speaking it?

Waiting to buy is for me always healthy.
I usually spend too much with toys.
Fixing a reason to wait is fair: getting better performance than devices I already own!

If you can afford to wait buying, then you don’t need it so I would agree that waiting to buy is the healthiest behaviour in this regard!

When I buy a computer, I usually wait for the next “big thing” and I buy the one that was the biggest thing a week before. Midi 2.0 is something else…It’s not only a simple evolution, it’s a complete new paradigm. It will take years to get new “toys” that really make good use of it at an affordable price.

If Midi2 is a more complex message structure to be sent on Ethernet, I don’t see reasons to wait for years.
Current Midi spec is old and poor, it worked extremely well but it is old fashioned.
We will see…

This has been a long time coming. I was a member of the MIDI Manufacturers Association for a while (2004-2006) and this was a major topic of conversation back then. They are really really really concerned about compatibility. The other thing about MIDI that many people are not aware of is that it is used outside of “sound” for many purposes (for us probably most notably lighting automation).

Of course there was a lot of “debate” (to put it kindly) about things over the years as well. I can think of two major manufacturers who wanted things “their way” and that caused some delay. These same two manufacturers had found ways to accomplish things that weren’t in the original spec and really wanted to see their “ideal” implementation in MIDI 2.0.

In the end, a spec like this holding its own for nearly 40 years is amazing. Congrats to all who took part and got this going.

I agree that at software level (and strictly speaking of internal midi) nothing prevent Midi 2.0 to spread quickly. But it’s a quite complex matter to implement on existing stuff and currently there are not many tools ready for developpers. For instance, monitoring, translation software, sensors that make use of 32bits resolution…
One area that I can see coming fast is some kind of dedicated controllers (drawbars) and compagnies such as Hakken fingerboard ans Roli seaboard. As you say, we’ll see and the faster the better, as long as everyone respect the retro-compatibility bit. Many manufacturers didn’t care about true hardware-electrical specifications…I hope it won’t be the same at compatibility level.

It appears as if there will be changes needed to the DAW or host software for starters I guess it will be something to think about implementing at some point on the Cantabile side of things. The improved controller resolution even when working with 1.0 protocol / devices is also a plus and they address the backward compatibility question is at the very front of the protocol so no orphans if it works correctly. To me all the MIDI association members deserve much credit for helping move the standard along to the new technologies that are now available while respecting the vintage MIDI gear owners of today and tomorrow. It may already have spawned a new retro fitting business opportunity for owners that want reasonable upgrade solutions for their favorite keybeds and activity at the major manufacturers as to how to implement this change.