I need to hear the piano(s) in Triton. Most of those old low RAM looped 2 layer ROMpler pianos were kind of excellent live in a mix.

Hmmm, that’s definitely not why I got the Triton - I’m so happy I have better pianos now than what was in those 90s workstations. I’ll admit, they can sound pretty decent in a mix, but they are a pain to play. All tinny and un-dynamic. Give me my Addictive Keys any day…

The only justification for using those pianos today would be to produce some 90s style dance tracks (or maybe some synth brit pop) - if that’s your kind of game (not mine…).

I agree with Thorsten considering piano from M1. At that age it was my forced choice. Today my Kontakt coda is incredibly better.
But I need to check better Triton. I remember that I didn’t buy the physical thing because I didn’t fall in love testing it in my dealer.
But now at 100 bucks is another planet…

@FredProgGH : what is your issue with Keyscape for live use? Just curious…

The Korg Triton was my main board in the 2000s (despite Korg’s marketing, this is definitely NOT a 90s synth… it began in 1999 and evolved during the next years). I have mixed feelings about it. I still know the default banks from the tip of my finger and loved exploring from there… but alone with a guilty feeling.

How does it sound so good whereas it only has c.a. 32MB of ROM? (maybe something like 160MB if you add all expansions). That’s because some smart guys working at Korg were able to loop very cleanly and efficiently. They also were layering like crazy, injecting a lot of effects (the effect section was very impressive at the times) and… doing some mad things with the arpeggiator, to the point that the Triton became an arranger.

Ambiance sounds a la Omnisphere => this still shines like it’s the first day but do you really play that live?
Piano => of course not. It’s a 16MB sample with a stupid amount of reverb
Keys => some preset are goods, you can tweak them a little, but we all have tons of better VSTs for that now
Organs => still surprisingly good, but again, we have so much better, discoverable and editable now
Strings => you can hear the looping after the first 150ms, remove the effects and you begin crying
Brass => no. They sound basic, ultra wet, and playability is questionable
Generally speaking, acoustic sounds => they are really dated now
Drums => they don’t cut it anymore - its all too much hip-hop and synth drum.
Synths => VSTs are destroying the Triton by now, even if this Triton VST had the MOSS expansion (which I believe it does not)
…

But while playing live, as an added bonus bank like XPand, SRX, etc. it should be sufficient and of great value, right?
I’m not even sure about it.
First it’s expensive, as noted by everyone here. And once you have played the acoustic sounds of a Tyros/Genos or some great Kontakt banks, you won’t go back to those sounds.

So, for having fun with layering/arpeggiator/basic arranger? Sure, it’s VERY fun. But this is for playing alone, with fond memories of 20 years back.
Specifically with this VST, I find the UI not very good. It manages to be both very big and very tiny at the same time. Editing is slow because I have to constantly aim at minuscule widgets.

Let’s end this diatribe. I still love my Triton. I made a lot of gigs with it, a lot of theatrical venues where I was the only musician supporting actors. A fair amount of programming and a lot of improv. Some sampling too, loading the 16MB ram with the floppy drive. I knew this thing almost by heart. Sometimes, I bring it back with the band, just for fun and it still has some wow factor.

But I moved on.

Toto… Very nice evaluation.
I think I can agree before testing Triton VST.
Now to other players here: why not Omnisphere and Keyscape live?
CPU heavy?
Program change issues?
They seem both to sound great.
Come on, I am against Christmas gifts, but in January I can buy everything!

This is why I love Omnisphere:

Now for some final rant:
Spectrasonics has no demo version of their product. It means you buy them right away. And because they are expensive, you HAVE to like them. I know I’m biased.

I don’t like Keyscape live because it’s too big and slow to load, and most of the extra quality of the sounds gets lost in the live mix anyway. I’d rather use Lounge Lizard, Pianoteq and the like- lean and mean models. I do use Omnisphere live now and then. My gripe with it overall is mainly that I don’t like its GUI and layout. It’s a PITA to locate and audition sounds and then tweak them. Half the time I just use the same old Atmosphere patches I’ve been using for 10 years.

Spectrasonics is slightly off topic, but I am known to hijack threads, so my apologies to OP.

I have to agree with @FredProgGH. In past threads, some problems have been revealed with Spectrasonics, from preset problems, load times, and crashes. Spectrasonics and C3 has progressed since then. Many members have elected to go “lean” in order to have quick switching,prevent load crashes, and less CPU load. Not everyone has an amazingly fast computer with tons of storage on an SSD drive, and elaborate amounts of RAM. Then, there is the price…whew!
There are also past threads concerning the loss of the quality in live performance. I personally know, from tons of gigs, when playing with a full band, all those great sounds DO get lost in the overall mix. I dropped many VSTs such as Ivory, Diva, many Kontakt libraries, and even my favorite E-Mu samples because the extra quality does not shine bright on stage, and beyond. Most audiences, and band members don’t care, and at the end of the day, it becomes frustrating when that gorgeous preset turns to mush trying to compete with the more dominant guitars, bass, and drums.
Now, I will concede, if playing a solo gig, or maybe a cool Jazz-type-trio-thing, or an extremely controlled stage environment, yes…some of the quality comes through, but it has been my long experience knowing no FOH running a stereo PA. Those amazing sounds lose a lot when running mono. As I stated above, when available, Spectrasonics is my preference in recording sessions, which is what Omnisphere and Keyscape were originally developed for. Headphones are the perfect environment for Spectrasonics, and I’ve not known any audience members wearing any, unless used for ear protection when listening to a Rock n Roll band,

My 2 cents from my experience.

Oops, indeed, I’ve been carried away with Spectrasonics here.

You are right that when our first concern is to have a passable live mix, having the greatest sample quality possible is not the first priority. Hell, the looks are even more important for most of the crowd if you are sufficiently loud!

But we live in times where a good SSD is affordable and the boundaries between studio and live are thinner.

That being said, with my limited experience so far, I can see that Omnisphere/Keyscape is not playing well with Cantabile. I’m probably doing things very wrong here and I definitely need some advice. I’ll post another subject instead of continue hijacking this one.

We love hijacking.
It supplies lot of information!

Since I am a hijacker, I should be demanding some money, or a helicopter and some food. You are all my hostages, so sit there and remain quiet while negotiations are ongoing.

Nearly all hostages love that…

Hi all. I cannot help to say something in the defense of Omnisphere/Keyscape here. With me they work fine in Cantabile, probably because I have sufficient RAM (16Gb), a 512Gb SSD for the programs and the Omnisphere/Keyscape samples. Sure, I guess my reducing the polyphony to around 16 voices helps performance as well, as well as using linked racks; did not use thinning but that might further help in case you experience issues.

The audience might not notice it all the time that I use this quality samples, but 90% or so I am practicing and playing alone, and my ears like the pleasing sound a lot…

let’s get back to the Triton.

Are you able to save and recall Rack States?
I tried all 3 of cantabiles preset models. Triton doesn’t recall the presets.
Steffen

Are you able to save and recall Rack States?

You have to select “entire bank” in state behavior. I was able to save and recall the two presets with no problem. 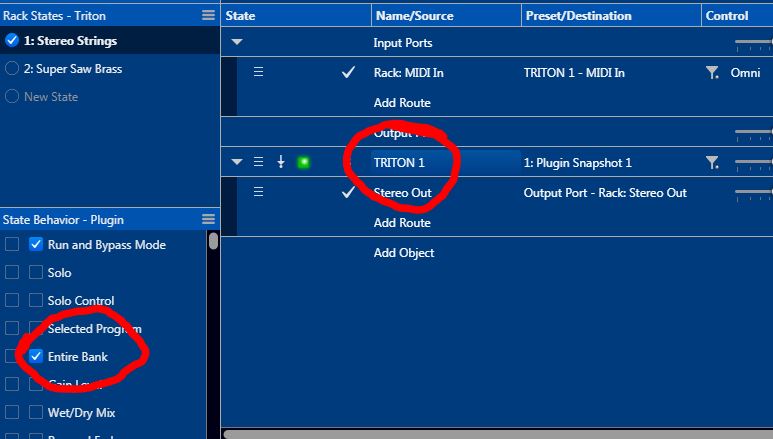 As far as the snapshot presets in Cantabile, I didn’t test them, but you will need to load Cantabile version 3537 to save the snapshots. Snapshots will not save in earlier versions.

Hope this will help you.

Thank you for uploading.
Unfortunatelly it doesn’t work here. (build: 3628)
Triton loads the “Noisy Stabber” only.

I’m using the Demo-Version of Triton. Could this be the reason?

I’m using Triton in the same config as @corky: state behavior “entire bank” and locking and saving the state for every patch. Works without a hitch - even switching between Program and Combi mode isn’t a problem.

Looks like an issue with the demo version; the demo page says “cannot save edited patches” - and that’s essentially what Cantabile needs to recall the current state. So it’s pretty safe to assume these issues will be gone with the full version.

If you want to use the “snapshots” preset model instead of the “entire bank” state behavior, you’ll definitely need to follow @corky’s advice and download build 3537 of Cantabile.

For pure information purpose.
I just fell in typical need of attention and bought Triton. Today was last day of discount. A killer mail from Korg pushed me to compulsive purchasing.
Tonight I will download and play a little.