Is anyone using (or know of) a Digital Mixer with extensive midi control or programmability?

Looking for a new FOH mixer that will allow me to control it better from Cantabile. As the lines between mixers and interfaces are becoming blurred, I’m seeing that interfaces as mixers sound good on paper, with tons of I/O and flexibility, but it doesn’t seem like they’re ready for prime time yet…?

I currently have a StudioLive 16.0.2, which is OK but there’s limited midi control. I need 16 inputs at minimum.
And it only has 4 aux sends ; I need need 6 at a minimum (5 for players’ IEM and 1 for EFX into C3), and maybe 9 (see below). It does have 99 “Scenes” so I can record a snapshot for various mixes, but that’s not really practical since our baseline mix is different at each venue, and it becomes a bit time consuming if someone gets a new mic with different EQ and gain since you have to change all the Scenes.

Our problem is that we use different FOH guys, and for some gigs no sound person at all. But there are several important cues for effects which sometimes get missed by the sound guy, and backing vocals could really use some volume adjustment and muting from song to song. What I’d like to do is to change effects and vocal volumes from Cantabile using bindings. Some of our songs have backing tracks and some don’t, so for tracks I can do bindings in the timeline, and for others I can just bind to specific states (which I manually advance anyway). That’s the easy part.

It seems to make the most sense to just run them thru a separate rack in C3. But that begs the question, how do I control the aux sends that are hitting that rack? So I think that, in an ideal world, I’d need a separate aux send for each channel I want to hit with effects. So I’m at 5 for IEMs + 4 for vocals. So, I believe I could send the 4 vocals into C3, into 1 or 2 racks… I could then mute input ports as needed, adjust the volume of specific ports, and then route to an EFX rack. Hmmm. That’s a lot of aux sends for a 16 ch board.

Maybe this is a job for the X32 or XR18, not sure yet. Behringer also made a 18 input Stagebox which sounded interesting, but I haven’t seen many positive reviews of it. I know QSC and Mackie have a couple of higher end solutions, but I don’t think they offer the integration into C3 I’d need.

I’m also in the market for a new interface (Thunderbolt). So I’ve considered using an interface as mixer… Some of the MOTU stuff is really interesting and their mixing software seems pretty robust, but I wonder if that will introduce latency issues, and it will definitely introduce higher CPU load. To what degree, I don’t know. Of course there are several mixers out there that are also have an OK interface, but I run guitar through my interface and use amp sims, along with a midi controller, so getting a new ultra low latency interface specifically for that is pretty much a given, unless there’s a product that will solve my issue that I’m unaware of. Anyway, any ideas are appreciated!
Tom

I’m using an XR18 with Cantabile. I don’t do much controlling over MIDI, since Cantabile internally handles most of that for me, but I do send it commands from Cantabile to turn up/down the talk-mic between songs and turn up the audience mic into the performers’ in-ears.

Thanks, how is it for control mid-song, i.e. to unmute/mute fx on one channel… or changing scenes mid-song, and if so does it switch seamlessly? In other words, if Scene 1 is the full band with no efx, but scene 2 only adds a long reverb to the lead vocals, is there any glitching or dead air at all when going to scene 2? My 1st gen StudioLive does glitch on scene changes so it’s only practical between songs.

Thanks, how is it for control mid-song, i.e. to unmute/mute fx on one channel… or changing scenes mid-song, and if so does it switch seamlessly?

Yes, it does do all the above and well. You have to use MIDI CC messages on the channel mutes and levels and they are direct real time controls and are independent of the scenes . Here’s the implementation for the X18 and XR18. 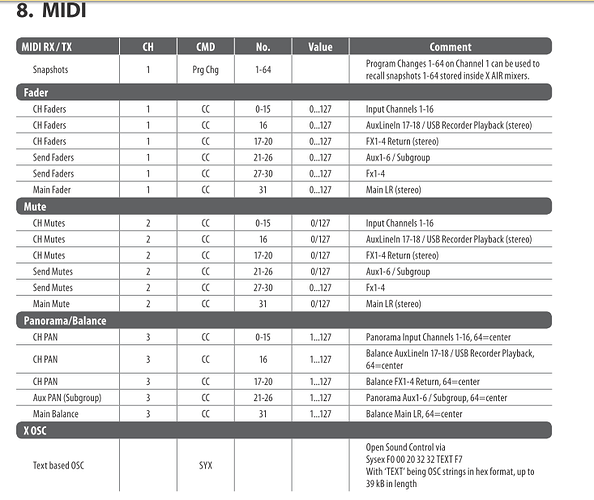 The scenes are designed so you can select what parameters are changed on a scene change and let the others stay the same for the whole night. So in the case where you just want to be able to EQ the FOH you could have a graphic or parametric EQ on the FOH out and it would be immune to the scene changes. So you can selectively decide what your scenes will store and return when called. They are called with simple PG changes. On the more detailed X32 (16 programmable Outs, 6 Aux Ins/Outs) there are both Mixer safes and Scene safes that use the same checkbox system. I have an X18 and really like it and use the scenes to change Vocal FX on different songs and it is no dead air or glitch. Some FX changes from scene to scene don’t go together well but that is a different thing.

Hey Dave, thanks for the detailed info. Sounds like a perfect solution for me. And I was shocked at how inexpensive the XR18 is, and after reading some reviews the MR18 could be worth the extra $300. Thanks!
Tom

I only use mutes, so can’t comment on other functions. I can say that the XR18 is a great piece of kit. The fact that it will also act as my audio interface, allow me to record the gig in multi-track, permits per-performer custom monitoring (with the PM16) and also gives me an external MIDI port… it pretty much does everything I need.

If it could record multi-track internally it would be my dream machine, but you can’t have everything.