How filter out pitchbend for a controller?

My lower keyboard (Axiom 61 1st gen) developed a pitchwheel problem last year. Sometimes it sends a pitchbend by itself which has me thinking the problem is not the physical pitchwheel but a glitch in the Axiom’s main board. It no long centers at 8192 (arrives at different values each time I let go of it after pitching up or down.

I should probably open up the keyboard and disconnect it but in the meantime does anyone know a way to filter out all pitchbend for a controller in Cantabile?

I mostly use it for my lower keyboard for Hammond playing so I can live with it disconnected but still want to know how to filter out pitchbend if possible. 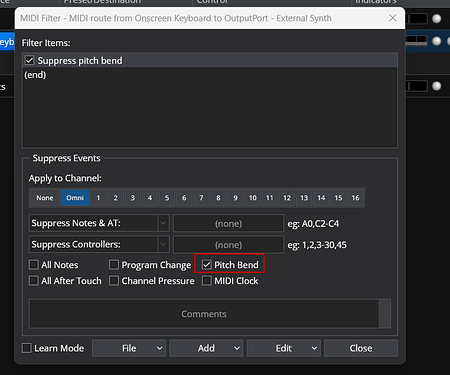 I did figure out that the problem is mechanical - I found a post on reddit of someone who got the right part from Novation (m-audio never responded to him).

I know the feeling. My Kurzweil K2661 is sending pitch-bend and modulation MIDI randomly, not touching the wheels. But it’s 20yo keyboard. I’ll try to sell it, trouble is, who wants a 15Kg 61-keys controller these days?

well… I am gigging with a Korg T3

The K2600, a 76 note (25Kg + case = over 30Kg) synth-controller has a great great keybed. Not full weighted, but yet acceptable for piano.
The 2661 was not bad when I bought it in 2004, but this is no more. Its mechanical health made me to abandon it. The wheels, some notes with velocity stuck at 127 and a general unreliability (after it dropped from the stand).

I still love the K2500/26xx series as controller. Very powerful, seems like there is a little MIDI-only Cantabile inside (sorry, @Brad).

I had the 01/w-fd in early '90s as a standard keyboard in my setup. It’s one of the keyboards I still own, somewhere. Don’t remember if the keybed is the same of the T3, which is an enhanced version of the M1. Surely (IMHO) the keyboard feeling of the 01 is still good, better than the Roland JV, or the horrible toy-like K2000 I played those times.

I used to practice on bass with a keyboard player who put together drum and rhythm parts on the K2500 . I was looking through a folder I keep all music invoices in back to the dawn of time and noticed my first ever purchase from Sweetwater was guitar patches/samples for the K2500 I bought for him (and myself - they were much better than the built in ones). That keyboard is sitting in the basement of our at the time drummer. I talked myself out of diagnosing whatever it is that caused our keyboard player to move on.

For the briefest time I considered moving away from Kurzweil, but a friend made me see sense!

I was looking through a folder I keep all music invoices

Into the K2500 folders? At the very end, K series OS is DOS compatible, and the files are in 8+3 format.