How are you using eq in your mix?

Sorry if this has been covered in a previous thread but how are you using EQ to shape your sounds, particularly pads and organ. Does it make sense to roll off some of the bottom on these kinds of sounds, particularly below 300 Hz? I’m thinking particularly about some of the M1 pads which have a lot of bottom. If I’m playing with a bass player it seems like these sounds could conflict and muddy the overall quality of the bands audio.

And what’s your EQ plug-in of choice?

Torsten has the best answers. Read his many comments.

How do you use Gain? Cantabile

What I am doing in all my songs: I have a “Master Rack” with two master faders in it (one for guitar, one for keys). This rack is the final gain control - and I’ve set it to NOT be controlled by the containing song, so it doesn’t get initialized when songs change. To lower the level of all keyboard sounds in a set, I simply pull the master fader (via a midi controller) - all keys sounds immediately go down across all songs. Before this “final level”, I have five levels of gain control: firs…

Creating an overall volume fader for each song Cantabile

Hi Lee, first: don’t use “trim” parameter but “1: Gain” - test it with the plugin’s GUI open. If the main fader moves when you push the fader on your controller, you’ve got it… I actually have THREE layers of interactive volume settings (and fader bindings): at the individual rack level (one FreeG instance per rack) to modify one rack’s volume (e.g. raise or lower the level of the string layer) - use faders A-D for this next, I have one “MainKeys VolFX rack” which contains a reverb, a delay …

He has many other examples in other threads.

Thanks Corky, I’m familiar with both of these threads (in fact, I started the 2nd one). Chocked full of good information. But neither addresses my question about EQ settings for pads and organ sounds. I did a search for “master eq” but could not find specific suggestions

Yeah, I knew that was your thread, lol. In a live situation, I never sit on the same side as Bass Player, just because of the conflict with Organ. I’ve not really rolled off a pad or Organ, because those frequencies are very essential to the richness of their sound. That happens with pianos as well. As long as the bass is not on top, or next to the key sounds, it is not a problem. Separation is the key, without sacrificing tone.

I tend to buld my sound more with a “producer’s ear” than with a “player’s ear”: as a musician, you may want your sounds to be “muscular” and “beefy”, i.e. with a healthy dose of lower mids. That holds particularly for guitarists, who have been socialized on amps blowing their sound towards the back of their knees, so they expect a sound that is heavy on the lower mids range. Also Hammonds are pretty beefy animals when standing on their own; pianos have significant energy in that range as well.

When you put all this together in a mix, it will create an unholy mess in the lower mids range, resulting in a “muddy” sound of the track - compare this to professional productions, and you will find, they’ve managed especially the range between 100 and 300 Hz very diligently - not cleaning it out wholesale but chiselling away until a healthy mix of voicings happens in that range.

All of this doesn’t matter if you simply feed your keyboard sound into an amp for your own enjoyment on stage - as @Corky wrote, as long as you don’t step on each other’s toes onstage (acoustically and otherwise), it’s not an issue. And the P.A. person will sort out the overall mix, so they may pull the low mids on the keyboard and guitar channels for the audience. In a club setting, where the instrument sound comes from the individual amps, things may be more difficult, but, hey, it’s club sound, so it’s allowed to be a bit more beefy… And usually the cymbals from the drum kit will project nicely, so that will take care of the brilliance bit; the vocals will be projected with some kind of reduced P.A., so just raise them a bit above the mud - all good…

In my main setup, we drive the whole band through the P.A., since we’re all on virtual instruments (PODs / Kempers, vDrums, Cantabile for my keys and guitars) anyways, so I aim for a more P.A.- and mix-ready sound. For that, most of the keyboard and guitar sounds have too much energy in the lower mids, so I do carve away a lot of the 200-300 Hz range on my keys. 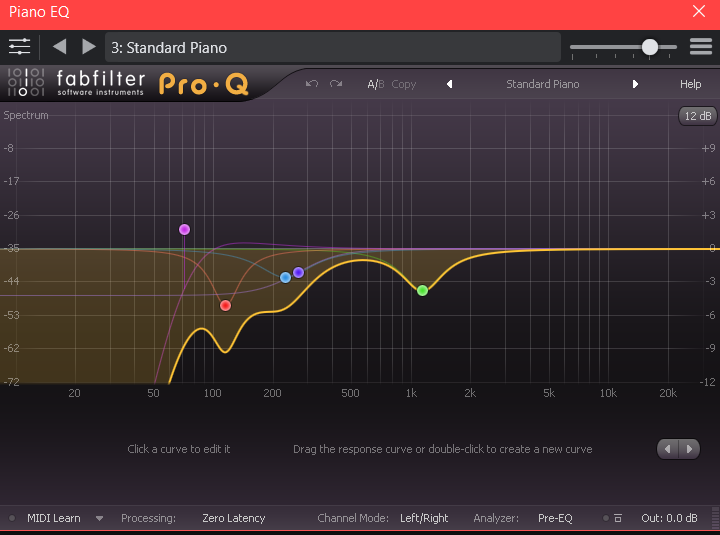 Looks pretty brutal, but helps the piano find its right place in a busy rock mix - you don’t want the piano in a rock mix for its mellow low end, but for its bite - that’s what it gets with this EQ. But sure, I do have some other rack presets with a more rounded EQ for ballads with the piano sitting more prominently and carrying the “warmth” of the song.

Same with Hammonds: too much bottom end will actually prevent it from cutting through in a busy mix, so I shave away on those frequencies for my “hammond layer” sounds (where the hammond acts as a pad behind the piano) and also for the lead patches that would otherwise muddy up the mix instead of shining above it. But of course there are also patches for more sparse arrangements (e.g. Green Onions) where the Hammond is allowed a bit more room - in these, I give the lower mids a bit more freedom, but not too much to get in the way of the bass…

And most synth pads definitely need cleaning out in that range - you can get away with pretty drastic cuts and still retain their character.

My absolute favorite EQ plugin is the FabFilter Pro-Q 3 - a pleasure to dial in, and it also has the ability to make EQ bands dynamic - kind of a frequency-selective compressor. That feature is great to tame some nasty screaming frequency peaks that do pop up in some organ plugins, but without eliminating that frequency altogether. Definitely worth buying!

BTW: all this cleaning up of the lower mid range also helps your in-ear-mix enormously, if you’re on IEMs…

Thanks Torsten. A thorough and helpful response, as usual

. My onstage time is primarily at church during worship services. We use a couple of amps (for guitar and bass), but everything goes into the house mix and is managed at the board. I do not use an amp. Not sure it will make any difference out front to tweak the EQ on my pads and organs, but I think I’ll play around with it.

Not sure it will make any difference out front to tweak the EQ on my pads and organs, but I think I’ll play around with it.