My local pub re-opened it’s open mic night and we’re going to play Hey Bulldog and it will be me on piano. At first I was thinking of using TruePianos but the SampleTank 4 Brandenburg sounded better. I’m curious what others here use for a live grand piano sound. I did look at the Garritan Abbey road - the question always is how does it sound live with a band?

Thanks for any advice.

From what I remember (and that is very little), Most everything The Beatles recorded on piano was that now famous Upright Piano. I don’t remember the brand. I do know that Lady Madonna was recorded with a Steinway Model B Grand Piano in Abbey Road’s Studio Three. They used a lot of compression and eq on it. Hey Bulldog also had the same feel. No doubt, the compression enhanced the in-your-face sound. I personally would use one of the pianos in Pianoteq, and experiment with a compressor.
I would think any “treated” piano might work.

There is an actual Kontakt library with the Abbey Road pianos and it’s awesome but I don’t remember it being cheap. I think either Addictive Keys upright or the Arturia Piano upright could do you well for that sound if you have either of those. I hate the Arturia piano except for the upright sound. Also, Pianoteq has an upright you should be able to tweak to that sound. With Pianoteq one of the grands would probably sound perfect if you drag the “condition” slider or whatever it is toward the janky side juss a little bit. You want a good sounding piano but not perfectly tuned.

Well crap! The Abbey Road Upright pianos are discontinued! If you wanted it now I guess you’d have to look on… one of those sites lol

But don’t do that.

Someone else sampled them, but don’t remember who it was, or if they put them out.

Most everything The Beatles recorded on piano was that now famous Upright Piano. I don’t remember the brand.

The Upright would probably be the “Mrs Mills” piano, a Steinway Vertegrand with lacquered hammers. You can get it for a reasonable price (€29) at Spitfire audio - just released. 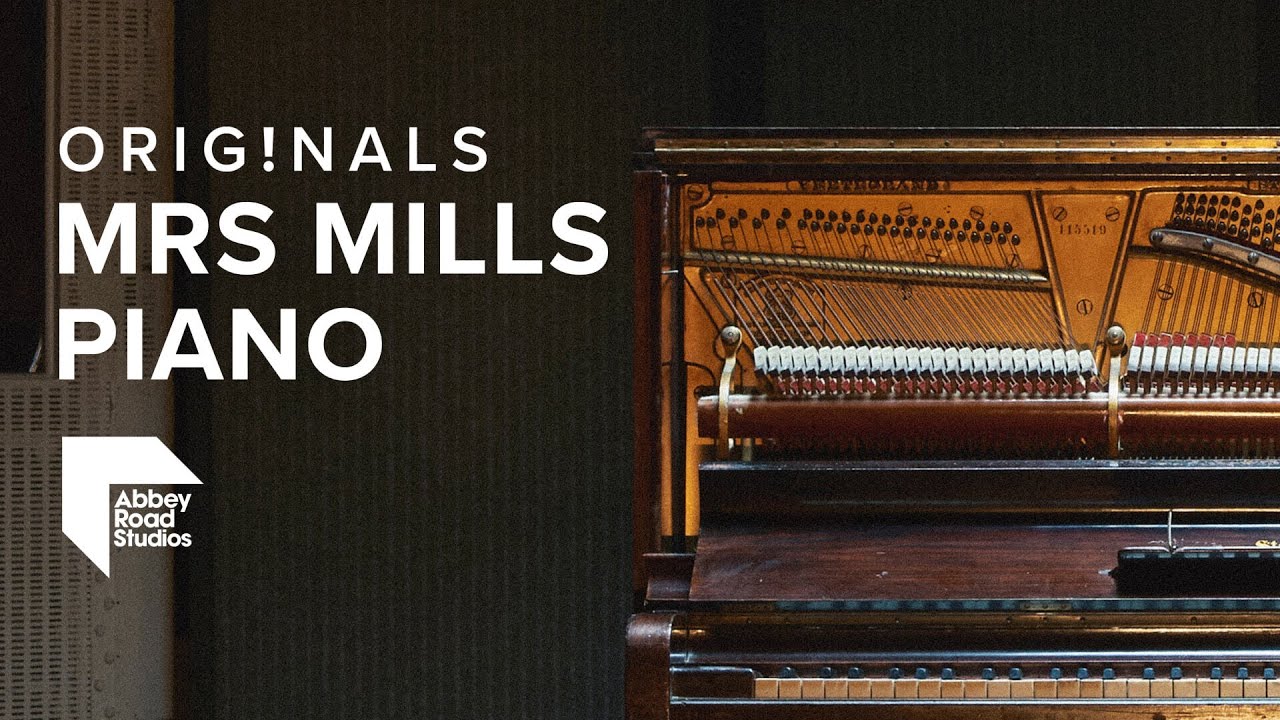 But looking at the video of Hey Bulldog, they seem to be using a grand piano - most likely the famous Bechstein Grand of Trident studios (used not only by the Beatles, but also Bowie, Elton John, Queen, Supertramp, …). Unfortunately, there doesn’t seem to be a sample set of that Bechstein (rumor says it fell down during a studio move and never really recovered), so you might want to approximate it using Pianoteq with their Bechstein model, tuning it a bit to simulate the state the Trident grand was in (set the hammer hardness higher, turn up the “condition” dial to around 50% and maybe fiddle with the dynamics (the original action was a bit knackered).

I usually start with the Bechstein DG Player preset and start fiddling - gives a great basis for that kind of sound.

My default live piano is the Addictive Keys Studio Grand piano - brilliant and punchy, and works great in a mix. Not what I would use for classical solo work, but almost unbeatable in busy rock mixes (I’ve created my own preset with mostly close samples and some custom EQ, but the factory presets are already pretty good)

Hmm, just checked - it appears that Hey Bulldog was recorded at Abbey Road, not Trident. Since the session was in Studio 3 (upstairs from the one with the Mrs Mills piano), the piano used was probably a Steinway Grand that was in Studio 3 at the time.

But the recipe above should also work with the Pianoteq Steinway

I just watched the Mrs. Mill’s video above, I’m in love with the piano and the woman playing it

There is a sort of wonkiness to the bass notes that I think will happen with an increase of hammer hardness and less than perfect tune as Torsten recommended.

Thanks everyone for the advice.

increase of hammer hardness and less than perfect tune as Torsten recommended.

Just note that this “customizing” is not possible with Addictive Keys (a sample set) - this will only work with Pianoteq (a modelled piano that allows you to change the parameters of the model).

Aha- that’s why the Cinesamples version went away. Those pianos were $200 before and Mrs. Mills is the one to have. That’s a good price.

From what I remember, if you look closely at the video, Hey Bulldog is not the song they were singing. They added snippets of other studio video takes. I don’t remember where I read it. Honestly, the piano really sounds like the Lady Madonna piano at Abbey Roads Studio 3. If I wasn’t struggling with Cantabile tonight, for a rehearsal tomorrow, I would compare them.

My default live piano is the Addictive Keys Studio Grand piano - brilliant and punchy, and works great in a mix.

I thought you stopped using AK live. At least, I remember a discussion on AK about 2 yrs ago, when I purchased them.

They shot video for (if memory serves) both Lady Madonna and Hey Bulldog while actually in a session for Ballad of John and Yoko at Trident. But I’m 99% sure both songs were tracked at EMI Abbey Road.

They shot video for (if memory serves) both Lady Madonna and Hey Bulldog while actually in a session for Ballad of John and Yoko at Trident. But I’m 99% sure both songs were tracked at EMI Abbey Road.

I do know that Lady Madonna was recorded with a Steinway Model B Grand Piano in Abbey Road’s Studio Three.

That would certify my old-ass memory then…

Wiki says Lady Madonna was the Mrs. Mills piano and it does sound like it. I do not think Hey Bulldog was the same piano though. need to listen to it i guess, it’s been a while!

Not really - still my go-to live piano. Have experimented with Pianoteq and Ravenscroft for softer parts, but the Addictive still feels best in a busy mix.

I do know that Lady Madonna was recorded with a Steinway Model B Grand Piano in Abbey Road’s Studio Three.

There’s tons of weird discussions around this on the interweb

Overall, @Corky’s hypothesis that a Steinway Grand was used for Lady Madonna, seems to be the most probable one

. And based on the information available, it also looks plausible that the same Steinway Grand was used for Hey Bulldog

Still, getting the Mrs Mills VST is definitely a no-regret-move at the price - and if it sounds and feels good for playing Hey Bulldog, then I’d say by all means go with it!

With live piano, it’s more about whether I feel good playing it in a band context rather than the last 10% of authenticity. As long as I’m in the ballpark sound-wise, it’s good. I’ve often found that the “best” and most authentic sample sets don’t really cut it in the heat of the battle - I’ve yet to find a more “honkytonk-ish” piano sound that I really feel comfortable with on stage. Currently, I fiddle with Pianoteq 7 and modifying some of their models, but I keep missing that last bit of “punch” that allows me to kick through the mix when I need to, while still giving me a comfortable mid-velocity base tone and a smooth transition between the two…

For clean, straightforward piano, my Addictive has remained at the center of my setup, but for some softer songs or balladesque intros, it just hits too hard (too much hammer noise) for my taste, so I’ve jumped back and forth between other options, but never really found something that makes me feel as “at-home” as the Addictive.

But that’s just me…

I watched several videos last night on the Spitfire. Very interesting. It is part of a new series they have, everything is $29 and 29 Euros. Will probably pick it up.

They used lacquered hammers on that piano, but a tacked upright piano would probably work with some EQ and Compression. They also detuned the lower 3 octaves by detuning 1 string on each note. Watched Mrs Mills play the piano, and you can hear some things McCartney picked up from her. She was great player.

I also watched this documentary on Mrs. Mills:
https://www.youtube.com/watch?v=NSNSo-LkUx8

I think the piano bass part in Hey Bulldog could well be influenced by Mrs. Mills stride piano.

The below quote on the Spitfire website answers something I’ve wondered - does Paul McCartney use VST’s?:

“Really exciting for me to hear Spitfire’s sampling of the Mrs Mills piano at Abbey Road. It’s great to have it on my computer” -Sir Paul McCartney