Sound great, unlucky there is not a Cantabile MAC Version. Sometimes I connect my guitar to a dual leslie, and i love the huge tone i get when one of the leslie is in brake position and the other spinning. By the way if you are using Amplitube 4, i just realized you can route inside amplitube two cabs into an amp and also using two amps in parallel so you get more options, give it a try. Regards.

Amplitube is my favorite way to use IK Leslie…more options. It uses more CPU, but it is worth it. We had the discussion above about the two, and most people favored the T-Racks version, mainly because of the price difference. That is why my presets are made with IK T-Racks. I still think the Amplitube version sounds much better, even though they claim it is the same. My overused ears still notice.

Ok, so if you own amplitube just behind the presets name you will find 8 numbered buttons, 8 different routing options, so if you choose the twin amp / cabs you don´t need to open two IK instances, as amplitube works like a rack itself.

Hi corky I tested IKM amplitube routing with button 2 & 3: 1 amp --> 2 cabs, 2 amps—> 2 cabs, as you mention results are not outstanding in terms of tone, I also prefer using resident leslie in B3-X, sound a bit fuller to me. Thanks for your support.

Just a heads up!

Been a while since I posted anything here (a lovely Welsh summer has kept me mostly outdoors), but on seeing this meme on FB, I had to nab it and post it here 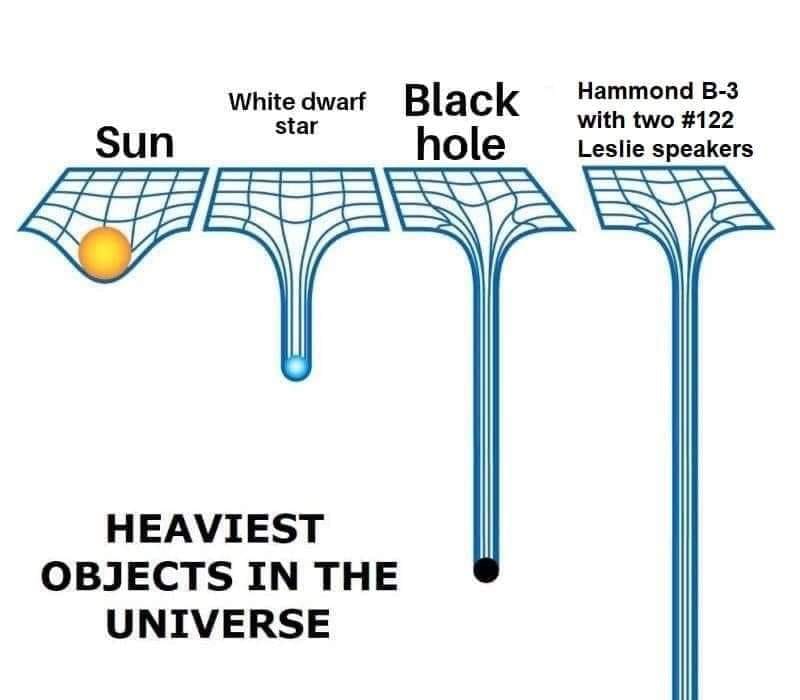 That is true, but I wasn’t judging by weight…by tone. That heavy, growly, in your face tone.

Thanks, waltercruz! Picked up the T-Racks Leslie for $25.99 USD with my Jam Points to go with my previously purchased Amplitube Leslie.

Here is the B5 preset for my stay at home project (not a “plugin snapshot”) must be loaded through B5.

PROJECT: BAD CASE OF LOVE – MY COVID RECORDING I took the cue from @DaveDore’, and did a remake of Memphis song. Bad Case Of Love by BB King is one of my favorites. This is a take on his best version from the Blues On The Bayou album. It is not exact, but is not meant to be. I painfully played all the instruments….all the notes. I played drums on a set of Roland TD-30KV E-Drums, furnished by a good friend. I used Acoustic Samples B5 for the Hammond, mainly because it has some great Gospel ton…

I should do that just to use with Corky’s shared presets!

I’ve got a bunch of jam points

This is related to the current discussions on this thread.

Which is why I have an arsenal of Hammonds. Kinda like my usage of B5 above

I knew it would fit perfectly into the project with it’s amazing Gospel tones. Not saying the others wouldn’t…just knew what I wanted, and where to get it. VB3 1.4, VB3 II, Blue3, B5, B3-X, and others, still reside in my setlists. Example: I was looking for a specific organ tone in Clapton’s live version of “Can’t Find My Way Home”. This was before B3-X entered the scene. I settled on VB3 II with IK Le…

Hi Corky, do you have a YouTube link for that version? Is it the one with Steve Winwood playing guitar (not sure who keyboard player is)

Not sure if it’s that particular video. One of my guitar pickers brought it into a rehearsal a few years back, I set the keys up, and we ran with it. I was using IK Leslie and VB3 II, probably because they were my newest toys, and It did have the long intro like that one. The one you ask about is the 2007 Crossroads Festival, and they changed musicians throughout the show. The Winwood set included Chris Stainton (keyboards), and Tim Carmon (keyboards), according to “WheresEric.com”. Tim was on organ. Hope that helps.

After I bumped into Booker T playing at Daryl’s house I did the deep dive listening to his whole discography. I’m working on some tunes from Melting Pot like “Chicken Pox”. Really has me thinking about the subtle harmonic changes to chords you can achieve with the drawbars.

Booker T was a huge influence. Saw him play many times, and is a very kind, gentle person to talk to. To really see his depth, I really recommend this:

He, and the MG’s were the band behind so many soul hits coming out of Memphis in the 60’s, much like the Wrecking Crew in LA, and the Swampers in Muscle Shoals. Stax and Volt records were just part of what he did. They also toured with the acts, such as Sam n Dave, Otis Redding, Wilson Pickett, Carla Thomas, Eddie Floyd, Issac Hayes…many others. All this while he was studying music full-time at Indiana University.

For me, he opened the door away from the jazz guys into soul, blues and gospel, which also eventually led into the Rascals and Blood Sweat & Tears, then on to Vanilla Fudge, Steppenwolf, Deep Purple, and all the rock stuff going on at the time. Before Covid, I would still throw in a few Booker T style lead licks in a few songs, just to put a smile on my face. No one but me would know, or understand.

For all the diehard B3 guys out there, this improvisation of Green Onions by Jim Alfredson is worth a listen. I like Jim’s improv variations that start at 3:30 min or so. Lots of drawbar pulling and Leslie switching going on the last half of the song. I believe it was recorded about 10 years ago.

Like Booker T, I have a lot of respect for Jim Alfredson as a Hammond master. Lots of tips and tweaks can be learned from his playing.

Thanks for the video. I’ve watched many of Jim’s performances. Much respect for him. Never saw this one till now.

Sorry I couldn’t get back sooner. I accepted a few TV/Radio ad contracts, and had some deadlines to meet.

What I was able to pick up from the few “clear” recordings of Art Neville on the internet, his sounds were definitely based in Gospel. Considering his age and background, that would make sense. There is also some Booker T and Jazz influence in his playing, which leads to Soul, and on to Funk and Reggae.

The preset I am sending is named “CR Neville”. You will have to load it into B3-X. I made 4 sub-presets for B3-X that I heard him use. They will be on the B and Bb key presets on both manuals. Hope you like them. Anyone is welcome to download this, just know they are not my normal preset share, and must be loaded directly into B3-X.

PS:
I noticed another New Orleans legend died this week…Bryan Lee. I was present at a live recording of his in the Old Absinthe House Bar on Bourbon St. He had many guest players with him that night. I spoke with him at length after the 1st set. What a nice guy. He introduced me to his guests: James Cotton, Kenny Wayne Shepherd, and Frank Marino. All of them are legends, and I was floored. I was truly floating on a cloud that night.