True to the hardware original, Hammond B-3X begins with 91 tonewheels, which are based on well-maintained Hammond organs that IK studied in locations around the world. These free-running tonewheels are mixed in real-time based on the notes played and drawbar levels, for authentic realism.

Hmmm. Makes me think they ARE sampled. Very strange that Hammond wasn’t part of the modeling, and left it all to IK. I would suppose Hammond to be more than an observer in the process, but IK has been doing it for a long time.

Very strange that Hammond wasn’t part of the modeling, and left it all to IK.

Yea, my reading points toward them inspecting and approving all the various working software ideas and product that IK produced before allowing the logo and licencing. Oh and they helped find the organs used in the models.

Oh and they helped find the organs used in the models.

“All around the world”, lol. Like Hammond didn’t have models in the U.S. to use. Sounds like an excuse for a paid vacation. Just had to model a vintage A-100 in a boarded up dive bar in Thailand. The cobwebs and dust added a unique sound I guess.

In my endeavor to unleash some future posts on this thread, I had to get elbow deep into the Hammond clones, and I have to tell you, the IK Hammond, and Blue3 are, by far, much easier, and more user friendly, than the others. More parameters, less limited. VB3 II pisses me off.

It was never this easy in “the day”!

This same guy has a great touch on the Hammond. Really love watching him play.

I like the exclusivity of this approach - just my equipment, no drums, guitar amps, bass amps, etc.

I used to be able to leg my 147 in and out of trucks by myself all day long. The C3 though, even chopped- not so much.

I like the exclusivity of this approach - just my equipment, no drums, guitar amps, bass amps, etc.

And no PA system. Searching my frail memory, I do not recall a time when I hauled only my equipment.

And besides the really heavy B3, there always seemed to be a Rhodes (Suitcase or Stage 88) involved. And some other amp gear. And cables. Lots and lots of heavy cables.

Speaking of a load to carry … 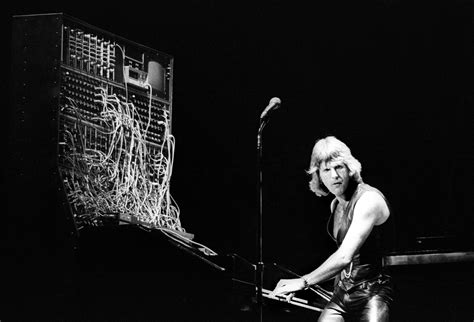 I’m glad I don’t have to carry Keith’s old setup around it would require 2 roadies plus me!! Plus patch changes are way faster in C3!

It was never this easy in “the day”!

When I downsized from a long wheel base, hi-top Renault Master van (drummer had quit, so his drum set was gone from the van, and rest of the band did not want to pay towards the running costs any more) and purchased a small FIAT SKUDO van from my old man, and I wanted to do a “test fit”, he took one look at the Renault van contents and said “no way”.

I said “hang on” and fitted everything in other than the bass player’s amp, and as he never paid me to carry his gear, tough! I guess we musicians are good at spatial awareness and 3D jigsaw puzzles!

The van cargo bay was rammed full from top to bottom, mind!

Best thing I ever did in my current Van (Vauxhall Vivaro LWB), was to get a set of boxes from the DIY store all the same size and shape and which are stackable. That makes life much easier as opposed to trying to fit odd shaped boxes together.

Even when I was a drummer, I was stuck carrying others gear. Broke-ass musicians were a plague.

In Pure Floyd, I was the only bugger who worked for a living (l), so when we needed a van (because hiring them all the time was taking most of the gig money) I said I would get a van provided the band paid towards the running costs. Fair play, the drummer (who needed the most room, along with the PA) was quite diligent in paying. It was always a PITA to get anything out of the other two.

In fact the main reason why I quit the band (apart from the fact that it had mostly run its course) was the guitar player (awesome Gilmour clone) expecting to be picked up, but…

I just couldn’t take it any more. Awesome Gilmour clone that he was, so you put up with a lot of shit, you will get to the point where it is not worth the aggro. And I got there in the end!

So when the band reformed a few years later as Welsh Floyd, I refused to have any involvement in transporting band members about or carrying their gear, other than by arrangement with the folks who I knew would be punctual.

I think we’ve all been through those experiences. Best thing I ever did was sell my enclosed trailer. My pickup may be next.
It always amazed me that I would go through the same routine with different bandmates. Many were on “disability”, and 5 days away from eviction, but monster players. They never had a ride, or cigarettes, or beer money. But, they always had weed and coke. Go figure.
Very glad those days are behind me now. I would rather stay home than deal with it all. However, I still see others going through the same process. Didn’t realize this was a worldwide problem, lol.

Sounds like we were in the same band! In fact 1st band I was ever in had a guitar player on disability (alleged industrial accident), but I have watched him vault over fences to save walking round them, where I’d fall flat on my face if I tried the same!

It bugs me as I work my arse off for a living in a high pressure job and still find the time to do the band (luckily I am an idiot who can’t sit still). But yes, four band members in Pure Floyd, with three being subsidised by my taxes was no joke when you think about it. I knew the writing was on the wall for Pure floyd when in 2011 I was working 80 hour weeks before deploying to Australia on a major work job, but still found the time to learn Floyd’s Echoes and set up my sounds. Took a half day from work (despite not really having the time to spare) to do a practice before going down under, so we had at least done something. Turned up at the rehearsal venue (always the first there), set up, and when the guitar player (who does not work for a living) told me he had not set anything up sound wise so didn’t want to do it, I totally lost it (which is rare for me). I fail to understand how people who do not work can have no time to be ready if I was!!!

So, yeah, a worldwide problem.

So, yeah, a worldwide problem.

We were either in the same band, or living in parallel universes.

KE never had to move around his own crap

Rhodes pianos were the worst, besides the Yamaha CP80s, and for the same reasons- at least if the B3 fell down the stairs you didn’t have to tune it.