to control specific external hardware features I need to be able to exchange channel numbers between an incoming and outgoing sysex-stream in a midi route on the fly.

But how can I handle this for the following examples:

The resulting sysex-commands have to be the same beside the byte for the channel number (the “00” - byte here for channel 1), that shall be changed to another channel number.

Is there any option to handle this in Cantabile Performer 3 which i did not recognize? Or is it simply not possible?

you can use a filter like this to modulate values…

(only an example …not your values) 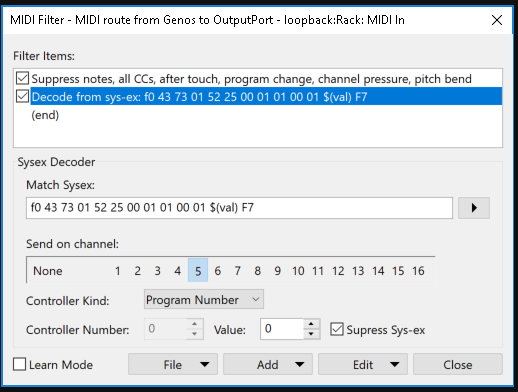 also you can work with sysex in bindings
maybe you can exactly tell what you want to do?

what I to try to achieve is controlling the voices that are used on a Yamaha Genos arranger via Cantabile.
When changing the panel voices on Genos via midi I have to work with midi-files containing a lot of sysex commands etc.

For the genos sounds I want to work with I have already redcorded the respective midi files containing all the commands needed to activate a specific voice and all of the effect parameters linked to that voice (I recorded the midi scripts via the multi-channel midi-recording-feature on the Genos).

The result is a bunch of midi-files each representing the setup for a specific voice that is activated on Genos as the “Upper 1” voice on midi channel 1.

So I can trigger a “Right 1 voice” - change in Cantabile by selecting the respective midi file in a media player object. Works pretty well so far.

But I also would like to set the “Right 2”, “Right 3” and “Left” voice on the Genos in the same way. To achieve this I will have to change each part of channel information in the midi file (in which channel 1 is referenced) to channel 2, 3 or 4 for the respective Genos Right 2/3/Left - voices.

Part of the work can be done by the midi channel routing/remapping featuere of Cantabile. But not for the sysex commands containing channel information.

I try to explain what I would like to do with the example from my first post:

In this example I can identify a sysex that contains channel information that has to be changed
by its first bytes, those commands start (in this example) with “F0 43 10 4C 08”.

The next byte is the channel information which I would like to change.

So far it would be easy to do with a sysex decode / encode - combination. The problem is that the rest of the commands (the part after the channel information) is not static. Whatever it’s content may be it must be the same in the output as it was in the input. I do not see a way to resolve this by using the $(val), as the content of the two bytes after the channel byte can have different values from sysex to sysex within the midi script.

I hope it is understandable what I try to explain.

Now I understand what you want to do…

but here the midi Monitor is bringing wrong results… 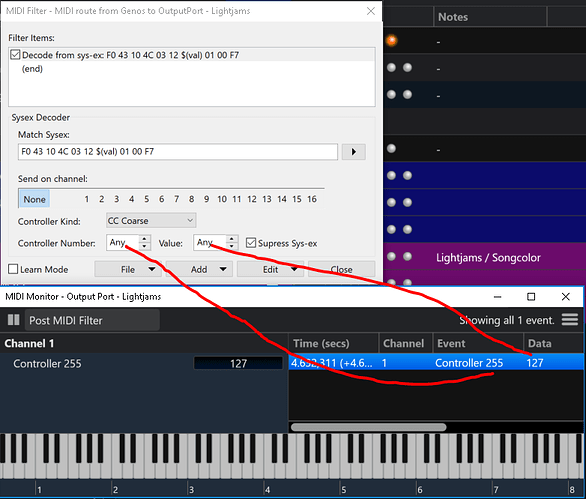 Basically you give it two sys-ex patterns. One which decodes the incoming sysex and if it matches, uses the second pattern to generate a new sysex message. You use variables to pass arbitrary data from the decode pattern to the encode pattern. You can have have as many variables as you like (well up to 256) and you can name them what ever you like. 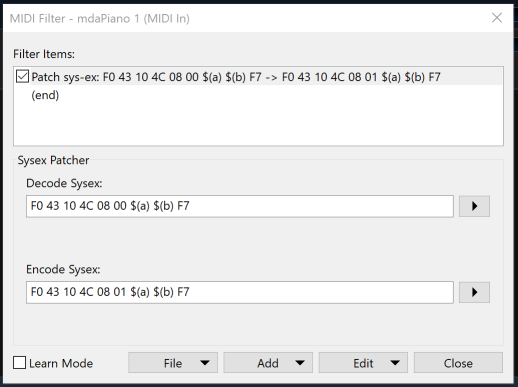 I asked above if the data was fixed length. The above will work if it’s always two bytes of data you need to pass along. If you have a very limited range of data lengths you could hack it and setup a couple of filters. eg: say the data could be 2, 3 or 4 bytes in length you could do this: 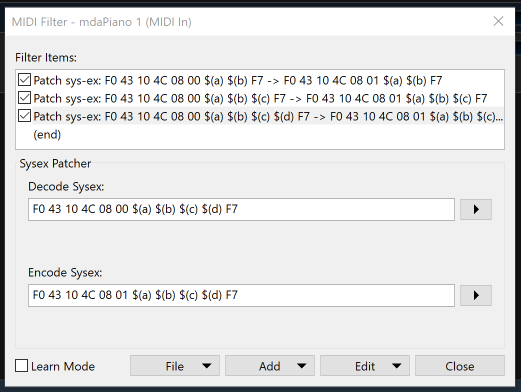 Will this cover what you need? If so, let me know and I’ll include it in the next build.

You sir are are amazing

@brad Have you looked at the controller values…? (specific : 0 and ALL…the rest is working fine)

Second Question: Is it able to insert some global Variables that can used in filters and also the results in bindings? …maybe you can make this variables for global use ??

Build 3577 is up now and has this. I’ve also updated the docs with cleaned up version of what I wrote above.

Second Question: Is it able to insert some global Variables that can used in filters and also the results in bindings? …maybe you can make this variables for global use ??

No. MIDI filters run in the core audio engine and can’t call out to Cantabile’s main variable system because it might cause audio engine stalls. These sys-ex pattern variables are self contained to the single MIDI filter.

If you want to use global variables to generate sys-ex data you need to do it in a binding.

@Juergen: Thanks so much for trying out things and your feedback to my question.

@Brad: Brilliant, it’s exact the feature I need, and just in a twinkle of the eyes it is there. I have never ever experienced such a great support in any piece of software I used. I am speechless.

Regarding your question, Brad, if the tail part of the sysex string is always in a specific byte length - as far as the midi scripts go I had a look into, I would say yes, but that is just a guess. But making some generic sysex-patcher handling 2,3,4… bytes should be able to handle that, as suggested.

If you want to use global variables to generate sys-ex data you need to do it in a binding.

…are there global variables?..I overlooked something?

Ah, I think we’re crossing terms. By global variables I’m referring to these.

@brad …am I right when I think so it is possible to use the onscreen keyboard controller to save variables (as controller) and recall it after songchange?

Possible I guess… The on-screen keyboard variables are only reset when the app restarts, so they will be persisted across a song change