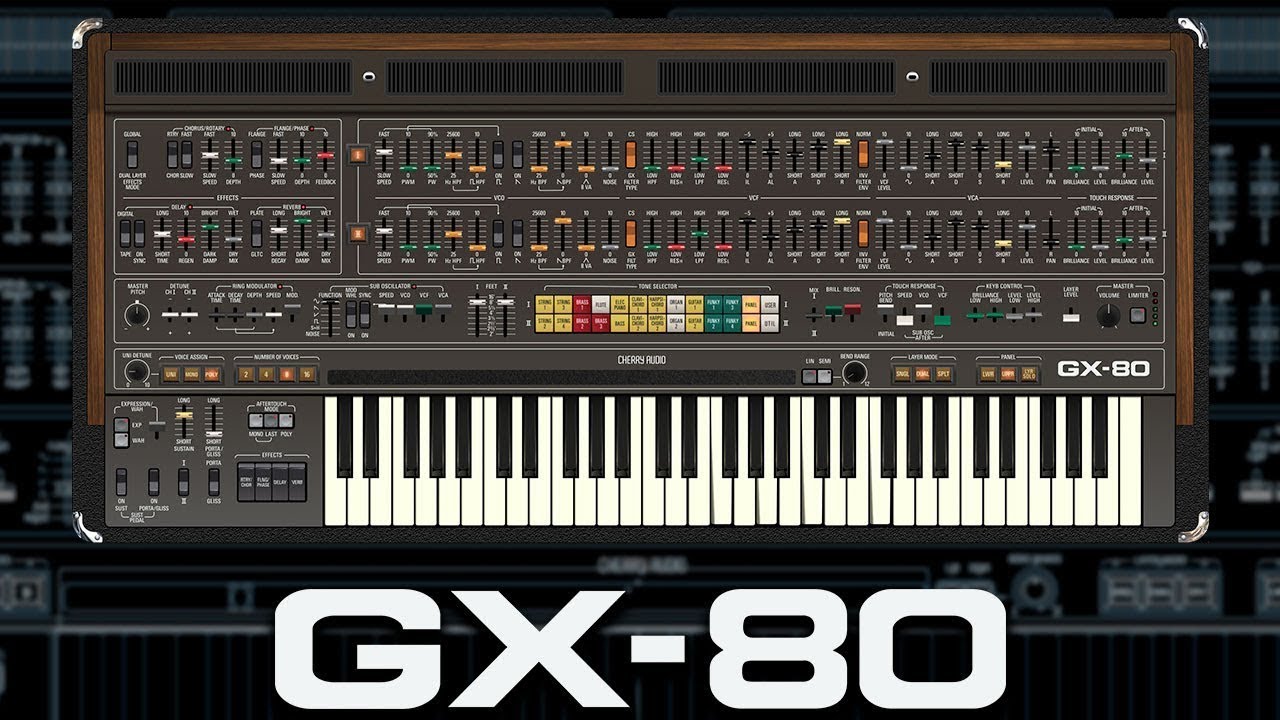 They’ve been teasing for a week or so, but the tease seemed too simple. Sure a CS80 clone, but a CS80 and GX1? Now that was a surprise!

Sounds awesome, he says, reaching for his wallet…

The true test for me is always the ring modulator on this beast. I had the CS-60 and it was wonderful!! I’ll be looking at it too, Thanks Derek!

I already bought it lol

Oh my wallet. Again it pukes currency faster than I can fill it.

No G.A.S. for Cherry Audio plugins here.
They couldn’t give me a clear info why I had to reactivate an already activated product on my studio computer and about the registration infos when not connected to the internet.
I don’t need such surprises at a live event.

Will need to look into that…

Just tried all my Cherry Audio synths with no internet connection active and all were fine other than one (Memory Mode) that just needed me to log in to my account, and then it was also fine, but I will raise the question with them

I am pretty sure that the Cherry Audio synths “call home” sometimes. To be safe, I have them all in one Cantabile song, then open the song once a week with a internet connection. Sometimes things are fine, but often I have to log into my account for one or more of them. I also discovered it’s important to change the check updates setting to “never.”

Yes, it was Memory Mode. I lost confidence to use their synths live since then.
In addition when you show the registration info from the plugin GUI and are not connected to the internet it shows “registered to: Someone famous”. Not a big problem but why aren’t my registration data there? This way I always think there is something wrong.

I just checked that for myself and you are correct! Turned my internet connection off and they all say “registered to: Someone famous”

I raised the query with Cherry Audio last night, and they gave me a very fast response.

Their reply said that their plugins should only need to authorise on first launch, but not having the latest versions when you have multiple products can cause issues, and this is the most common cause for reauthorisation (I am guessing due to some shared library used between the synths).

Once you have activated each product on a device, it should retain that activation. However, a few s...

And indeed, MemoryMode on my system is an older version that needs updating.

Other reasons for reauthorisation might include changes to the computer name or a share folder in %appdata% being deleted.

That gives me more confidence. And I tried all the synths in offline mode tonight and they were all fine.

Thanks for this, I was going to contact them.
I had this same issue with galactic reverb (twice), only when I
loaded the plugin after forgetting to turn the network hub off.

The following is a direct copy of the last response I had from Danny at Cherry Audio, who I think has been really helpful and responsive. I asked Danny to have a look at this thread and provide some feedback on the issues and concerns. Text in [] are my comments

I can’t say what the experience was for the person in that case [assume Danny is referring to UKM’s issues] or when that occurred; we are a young company and as mentioned previously, there were some issues in early releases that caused some problems. However, at this point we have a stable activation system in place assuming all products are updated from those older releases. I invite anyone with these activation issues to contact support; we will promptly and tenaciously support them until things are stable again.

If a computer name changes, it throws off the token that is generated and checked between products. Older releases encountered situations (especially on Mac) where the computer name was often mutated, usually due to network situations or Apple changing things in the OS. Also, some network appliances will append hostnames and junk to a computer name. So, fixes were deployed in updates to deal with that and if a release is present in the system that doesn’t have those fixes, you get a token mismatch each time you go in between the older and newer products; it creates a loop of token mismatching.

So, the ‘phoning home’ part is really only to check for build and major updates or if there was a token mismatch due to circumstances above. The activation check is happening locally and only prompts for login if there is a discrepancy in tokens.

I’ll update some keywords and repackage the info in a live-centric article as well; any opportunity to get activation issues resolved quickly or without support requests at all is a good thing. [referring to my comment that the info link I gave above, does not come up when you search for Licence in their support system]

The plugins will report “to somebody famous” when offline. I’ll get back to you why we have it doing that, but it’s not a bug. [In response to the comments about registration not being traced back to user name when offline]

Hopefully this is helpful information, but please feel free to follow up with any questions and let me know how things are going once you have had a chance to update Memorymode. [referring to my report where MemoryMode did require reactivation, but it is an old version]

So, personally, I am comfortable to use their products live, subject to ensuring I update to the latest, and I will also put them in my GIGPC (haven’t done this yet) and then knock it offline for a long period to test it. And to be fair to Cherry Audio, notwithstanding the time zone differences, I have found them to be very responsive. I have fired off two queries late UK time and had responses by the time I checked the following morning.

The problem occured out of nothing when reopening a song in Studio One with Memory Mode - no system changes.
Since I’m very critical with choosing plugins for live use even one problem is one too much.
This way I have a reliable live systems for more than 6 years now (and on the backup computer too).
May be some time I update the plugins and try it again.

You have to go with what you are comfortable with, but I’m going to give them a go live, but will now start some careful checks on them well in advance of when I need to play live.

The folks at Cherry Audio are very accommodating, open to suggestions and surprisingly responsive.

On another forum dedicated to gear (wink wink), I made a suggestion and mockup to enhance the features of their right-click context menus for their Mercury4 product, and Dan from Cherry Aurio actually took that suggestion (on Sep 17), put it into their product over the weekend and had a new version incorporating my request (on Sep 20), and went further to say they liked that idea and put it into all their products.

I agree, Cherry seems very interested in building their customer base with fantastic products and support. LOL, I bought 4 synths from them the past week as a result…GX-80, Memorymode, Eight Voice and CA2600. All are amazing recreations imo.

When I listened to the demo trax for GX-80 on CA’s site I thought it sounded very cinematic. So I did a little test with BBCSO Pro, LABS and five instances of GX-80 to see if the products would work well together.