I have a hankerin’ to control OBS scene switching (which can be switched with hot-key assignments) via a MIDI file played in the Media Player in Cantabile. That way I could call up the camera or media screen desired relevant to performing different parts during video recordings or streams of performances.

Is this already possible? (I could not find it…) I’m describing a MIDI to PC keystroke feature.

I know I could use Bome’s Classic MIDI Translator for this as per this article, but didn’t want to miss if Cantabile already supports such a thing.

If not, consider this an official feature request!

edit : You would have to protect dedicated Cantabile Hot Keys and have a list of available choices. Am I on the right track? @terrybritton do you mean collect the midi cc in and then create a keystroke for another open window/application without messing with C3 Hotkeys? How would control focus of the keystroke?

You can create bindings to generate PC Keystrokes. This will inject keystrokes as low level keystroke events that will go to the active application and the set of keys is somewhat limited.

If this doesn’t cover it , but is close let me know. 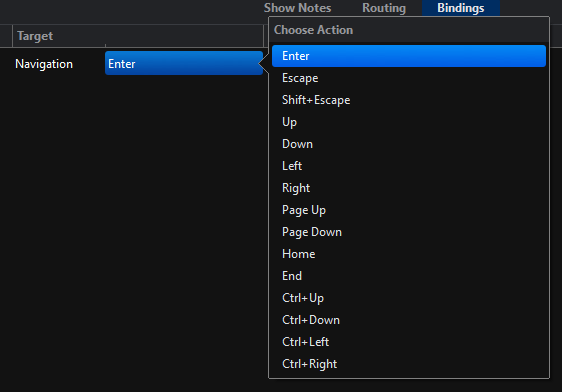 @brad OBS hot-keys can be set as shift/ctrl/alt plus an ASCII key, like SHIFT-CTRL-A, or CTRL-ALT-SHIFT-S (those are ones I actually use!) I’m not sure it can use these keys assigned in Cantabile that you show. It seems to want alpha-numeric with a modifier.

@dave_dore - The modifier keys make it easy to select combos that would not interfere with Cantabile’s keys. Most of the ones I actually use employ CTRL-ALT or CTRL-SHIFT combos.

I am really excited by the prospect of controlling scene switching via MIDI - either directly from a controller or foot switch sending program changes like my FCB1010, or pre-programmed in a “backing track” played with Cantabile’s media player! That would make doing multi-camera/multi-screen presentations so much easier, without having to take myself out of the “zone” to slap some button or foot switch!

@brad OBS hot-keys can be set as shift/ctrl/alt plus an ASCII key, like SHIFT-CTRL-A, or CTRL-ALT-SHIFT-S (those are ones I actually use!) I’m not sure it can use these keys assigned in Cantabile that you show. It seems to want alpha-numeric with a modifier.

OK. I’m not too keen to extend this further at the moment, so perhaps an Bome, or a WSH script. See here.

Man, good thing I still have some computers running those systems around!!!

I’ll see if there is an updated version of this over at MSDN.

Perhaps instead of wsh, try AutoHotKey.

Perhaps instead of wsh, try AutoHotKey.

I’ll give that a look - I haven’t used it in years, but I have used it and it was robust even back at the “turn of the century”!

Bome Classic MIDI Translator looks like it is adequate for my simple OBS manipulations, though, at least according to that article I’d cited above.