Better Tempo tap accuracy with this!

Hey guys,
I just talked with Brad and he adviced to discuss here.

The tempo tap could be more accurate if there was a system like on this website.
As here, you can change when it auto resets.

IMO now the c3 tempo tap resets too fast, making it less accurate.
It increases the tempo count accuracy the longer you tap.
I think a simple option, tempo reset time or so in the settings would do the trick.

Who’s in for the idea?

Just to clarify the difference here:

The biggest difference seems to be this: if you tap really quickly and then tap slowly (without triggering a reset) Cantabile will more quickly drop down to the slower tempo. The linked site, takes longer.

Happy to change the routine, or provide options to control it but want some feedback first.

I went to the site and tried the tap tempo there against C3’s tap tempo and found no need for any changes so i didn’t post but since you asked for feedback there is mine. The current scheme works well for me when I need it and I can tweak it with the ± buttons if it’s not right on.

The current scheme works well for me when I need it and I can tweak it with the ± buttons if it’s not right on.

Thx for your replies. I’m tempo matching it allot with songs or my drummer and with cantabile it just doesn’t fix that well. I mostly try this site then.
Maybe we should be able to tweak the reset time?

Or set my video to less sharpening

Yep that’s basically what I was saying. Cantabile’s tap tempo tries to respond to changes in tapping the tempo where as site web detector is not.

Let me think about it because I’m not sure I want to change it unless there’s some more support for this idea.

Wel to me it’s obvious the c3 isn’t as functionnal as the website?
When in live situations i tap along with the drummer on click i don’t get a steady nor accurate result.
I hope you look into it (later

I’ve had a look at this and I agree - depending on what you’re trying to do.

In the next build you’ll be able to right click on the tempo button in the main toolbar and choose “Tap Tempo Settings”, from where you can set the min and max tempo detection range as well as a mode:

The last option is the same as the web site (I think). The longer you tap the more stable it becomes - but that also means it becomes very unresponsive to changes (which is the point I suppose).

The second option - is similar to the website bpm detector except it only looks at the last 16 taps so it’s a bit more responsive. 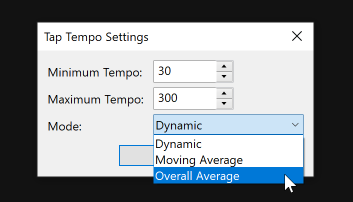 Again
Waw
Waw
Waw
Amazed once again!
Thx, this will be very handy to keep up with the drummer when he’s out of sync again

I think this is a good move. Tracking tempo, where you’re looking for plugins to provide a musical result against a live player, is always better taken as an average over time rather than trying to chase every fluctuation.

@brad, what is the reset time? Would it be possible to choose this also from the menu?

@brad - May I throw in a suggestion that, if possible, could be really cool?
Make the first 16 beats with Moving Average and then switch to Overall Average.
Or… allow the switch to happen from Dynamic to Overall, with a user specified number of beats before the switch.
Does this make sense?

what is the reset time? Would it be possible to choose this also from the menu?

I thought about this but don’t really understand the use case for it. It’s set to 2 seconds at the moment which matches Cantabile’s minimum tempo of 30bpm. Make it longer does help because you can’t set a tempo less that 30bpm. Or, is it because you want a shorter reset time? ie: I can do it but don’t understand why?

Make the first 16 beats with Moving Average and then switch to Overall Average.
Or… allow the switch to happen from Dynamic to Overall, with a user specified number of beats before the switch.

Switching from moving average to overall average after 16 beats doesn’t make sense unless the moving average period is made shorter (it’s currently 16 beats so, switching to overall after 16 means it was overall all along.) Again what’s the use case? Is it so that a short series of taps will set things roughly, but tapping long enough gives a precise figure for the whole sequence?

Thx Brad,
Yeah i love to have control over the reset time. To make it longer indeed, but depending on the tempo rate that might not be needed. So i guess 2 sec is ok
Another question, could the media player samples be time stretched with the tempo.
That would help allot for beats i have running along.

Want to get into the ballpark quickly and then stabilize.

Can you upgrade them too?