Best Way to Utilize RAM and CPU. Does bypassing the audio effect this?

I am new and have heard wonderful things about this program. I have used PT, Sonar, Studio One, etc live before. I don’t know how to read the signs shall we say. My time load goes up really high when I play a lot of notes and working out now if I am getting crackles or not -I have crackle phobia. I am using a Babyface interface and Ravenscroft Piano, and 4 instances of Komplete Kontrol -Scarbee Rhodes and Wurlitzer, Vintage Organ, and another organ for the left hand with a second controller. How do I best use my real estate? At the moment I am bypassing the audio on the plugs I’m not using, but the midi activity is still showing. Is what I am doing the best way to preserve power so that I can stay at a low buffer? I have read a few things about Time Load but I am still not sure if I get it. I only have 8GB of RAM (I know, but my other laptop blew two MOBO’s and I am using my Yoga and no way to upgrade the RAM. Think I should only have loaded what I am using for each song? For instance, rhodes and organ? Or just the piano? I was working earlier with my Yamaha MX onboard interface and I didn’t seem to have the problem. Tried to load up Omnisphere and got serious crackles so decided to try the Babyface. I hope this is a little bit clear.
Ok -found the edit button right as I was to reply a 3rd time -sorry. So, what I have tried doing now is instead of bypassing the audio on the plugs I’m not running, I hit the run button (goes from green to a slashed yellow) and that seems to have made a huge difference. I do appreciate this wonderful program.
Edit 2 -even with Omnisphere in it I’m cruising. I don’t know what happened. Maybe the computer had to get used to switching interfaces. Thanks everyone.

Welcome to the forum!!

The secret to all this is to reduce anything that contributes to ram and cpu. The developer, Brad, has a free book you can obtain on this site called “Glitch Free”. Follow his instruction, and you will reduce resources in your computer.
Also, it is much better to run modeled VSTs, instead of samples, as they will hog everything. Larger sample plugs, such as Omnisphere, will not run lean. Unless you’ve got an ssd drive, lots of Ram, and a good processor, it will give you problems.
Don’t put all your eggs in one basket. Load only what you are going use within one song. No need to load everything. I’ve been performing live with only VSTs for the last 15 yrs, most of it on a Win 7 machine. There were many Kontakt plugs I couldn’t use, so I found the leaner plugs do just fine. I am now on a Win 10 laptop with 16 GB Ram and an i5 CPU. I can run Omnisphere and Keyscape just fine, but really like the leaner plugs, as they load faster, and are reliable.
Read Brads book…it will get you where you need to be. Good Luck!!

Hello Corky and much appreciated. Thank you for the warm welcome. I noticed you had some organ tips. Will look you up.
Last time I heard the name Corky was in a band I toured the Southern USA with - many moons ago. I wouldn’t know where to begin to look for shall we say “lower quality plugs”. Anyway, its working great now. I have 1. KK Wurlie 2. KK Rhodes. 3. Ravenscroft Piano 4. KK B3 right hand 5. KK B3 left hand. 6. Omnisphere. They are all in there purring like a kitten, but I do disable them if not in use. Yes, SSD, 8GB RAM, i5 but a faster one, Windows 10, Babyface. I will check out the book.

I noticed you had some organ tips. Will look you up.

Quite a large discussion there!

I also have presets I built for some of the popular Hammond clones.

For lighter Hammond plugs, I use VB3 1.4. Blue3, and VB-3 II. IK Multimedia Hammond B3-X and Acoustic Samples B5, aren’t as lean as the others, but sound great.
For Pianos, E-Pianos, and Clav, I use PianoTeq. The are modeled, just like the 1st 3 Hammonds I mentioned, very easy on resources, but a little costly. The Kontakt E-Pianos are not too bad, but they are samples, just like most Kontakt plugs. There are many we’ve discussed in the past…the search engine here is very good, and I rely on it all the time.

Last time I heard the name Corky was in a band I toured the Southern USA with - many moons ago.

I am in Memphis…so that should tell you a lot.

At the moment I am bypassing the audio on the plugs I’m not using, but the midi activity is still showing. Is what I am doing the best way to preserve power so that I can stay at a low buffer?

If you’re just bypassing the audio, then you are making your CPU work for nothing - it needs to do all the hard lifting for creating the sound for all instruments even though you’re not hearing all of them. No wonder it is complaining

The better way is to only activate the MIDI routes to the instrument plugins that you are actually using in a song or a song section, then only these plugins need to be processed by the CPU - instant load relief! Usually, the base-load of instruments without notes being played is pretty low, so you don’t need to turn them off via the run button - turning them off and back on can sometimes create glitches, so safer to keep them on.

Omnisphere is a bit of a resource hog, so if you can find “leaner” plugins to do the job, I’d encourage you to use these, especially if you want to layer multiple instruments for a song.

Last: once you become comfortable with Cantabile, try to understand the concept of racks and pre-loaded setlists - in any song just load the instrument racks you need for that song. You’ll still have fast switching times between songs by using pre-loaded setlists, and using racks means that you will not need to load dozens of instances of the same plugin - which becomes un-practical when using large sample-based instruments.

But maybe leave that for later - start out with getting individual songs running efficiently by optimizing your MIDI routes to the instruments.

Here is a good discussion on lighter plugs:

In another thread, I coined the term “CPU-Hogitis” to explain why I had unearthed my old hardware synths recently, for more layering options. However, that mention fails to do justice to the AMAZING number of synths that can be loaded and ACTUALLY BE USED at the same time when using Cantabile! MOST VSTi’s and VST effects are NOT CPU hogs! So, I thought I’d start a little thread where people could mention their favorite low-CPU instruments and effects, which might be useful for “layering freaks…

will check out the organs. You know how the money goes these days. I don’t like the NI Vintage, but its all I g
have for live. I use a Korg CX3 and Leslie in the studio. Pretty sold on the Scarbees Wurlie and EP88 Rhodes and the Ravenscroft.

could you point me to an explanation about the midi routes. How do you disconnect and connect? Have all the instruments in there, but don’t assign the midi until you are going to use it? 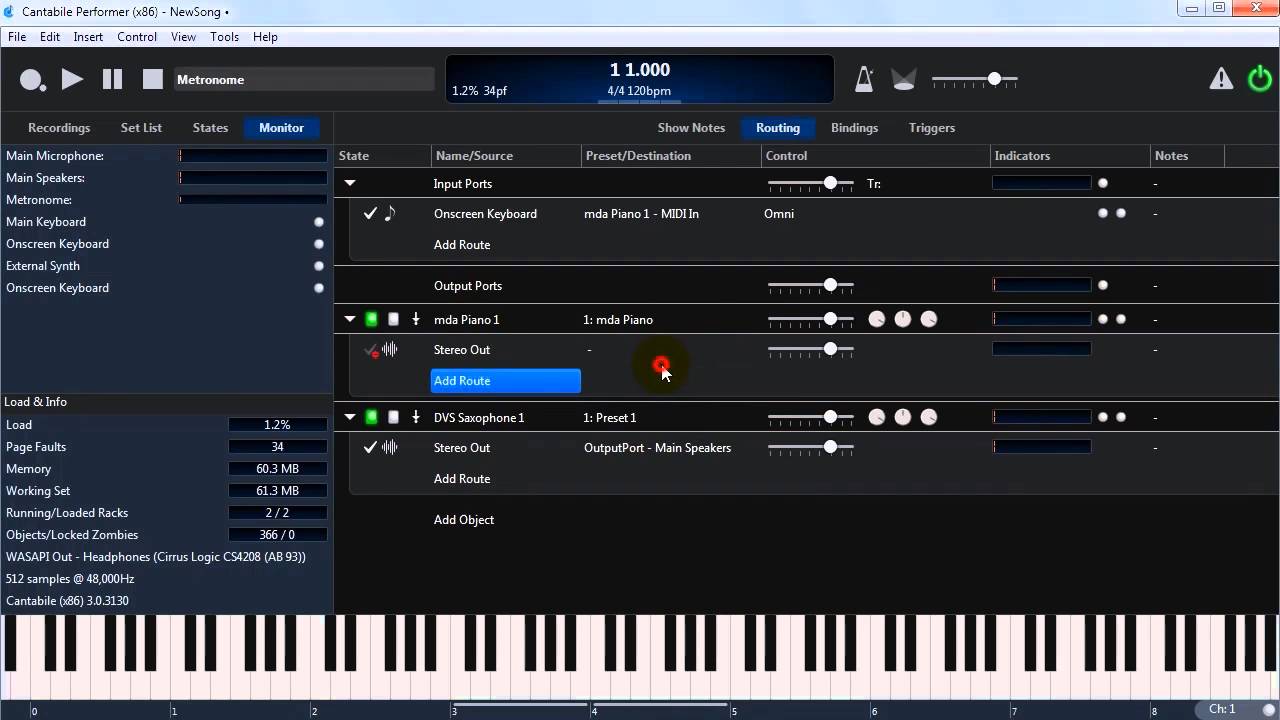 sorry, I eas replying to Torsten. I know how to route, but he mentioned only route the ones that I am using for each song. I will try replying to him. Thanks.

thank you. Yes, turning them off and on really relieves the load, but I agree it could be problematic, though easy to do because the toggle is right there on the UI. So, instead of setting up all the midi routes to all the plug ins, you are suggesting to just navigate to there and do it song by song and leave the other plugins unrouted unless being used? How do you do that quickly?

So, instead of setting up all the midi routes to all the plug ins, you are suggesting to just navigate to there and do it song by song and leave the other plugins unrouted unless being used? How do you do that quickly?

What I meant was: set up the routes to all your plugins, but de-activate all routes to instruments that aren’t used.

There’s a lot to learn - Cantabile is a pretty powerful but complex environment. Start simple with just a few plugins per song and work your way up to more complex setups.

thank you for your patience and detailed response. I’m on it.