Follow-up: my “almost done” turned out to be not working, because one of the tricks I used was to turn off the ‘modern standby’ (aka connected standby), which resulted in the screen not being turned on when the pc was turned on. Not very useful, so I made a complete reset and started all over.

Now my plan is to look into scripting this, i.e. make a powershell script that a) creates a new powerplan based on high performance plan, b) tweak the new plan to fit the recommendations from Glitchfree …, and c) turn the settings on to be visible. So, unless someone has better recommendations, I hope to get this sorted out this week. I’ll be happy to share the results, if anyone are interested.

I would be interested in at least seeing what you create. Thank you!

I have created a “good enough” workaround with a PS script that finds the Windows High Performance that is hidden, and also disables the real-time Defender monitoring and Indexing. A few other changes I make manually when preparing for a rehearsal or show. So, OK for my part-time use, but I would love to have a more complete automated solution.

I am currently on a support thread with Lenovo to “discuss” the setup, so I’m working on that part in parallel with investigating the automation, and also got a setback that my restore points in Windows 10 tends to disappear - but I will continue and keep you posted with progress.

This article is a bit more useful, and shows the easy method for adding the “Ultimate High Performance” plan to any current Windows 10 build.
https://www.tenforums.com/tutorials/107613-add-remove-ultimate-performance-power-plan-windows-10-a.html

From the text: " A new power scheme – Ultimate Performance: Demanding workloads on workstations always desire more performance. As part of our effort to provide the absolute maximum performance we’re introducing a new power policy called Ultimate Performance. Windows has developed key areas where performance and efficiency tradeoffs are made in the OS. Over time, we’ve amassed a collection of settings which allow the OS to quickly tune the behavior based on user preference, policy, underlying hardware or workload.

This new policy builds on the current High-Performance policy, and it goes a step further to eliminate micro-latencies associated with fine grained power management techniques. The Ultimate Performance Power plan is selectable either by an OEM on new systems or selectable by a user. To do so, you can go to Control Panel and navigate to Power Options under Hardware and Sound (you can also “run” Powercfg.cpl). Just like other power policies in Windows, the contents of the Ultimate Performance policy can be customized.

As the power scheme is geared towards reducing micro-latencies it may directly impact hardware; and consume more power than the default balanced plan. The Ultimate Performance power policy is currently not available on battery powered systems."

The following piece was also useful - an unintuitive change to the 3D power settings on an Nvidia card.


(On my Nvidia card, an “Optimal” setting was the top one, which is a power-config that is definitely sub-optimal for our purposes. Use the “Prefer Maximum Performance” option mentioned in the article.)

I should mention that with the Ultimate High Performance profile, one still needs to go into its advanced settings and turn off the USB power management.

I already found the Nvidia control panel tweak during the initial install of Windows 10 on my PC. This “Ultimate High Performance Profile” sounds very interesting

Hi,
On my surface pro 3 I can’t find that power plan! Can someone help me !
I tried lasso seems to be cool:)

The plan will be displayed on the control panel after you enable it. Follow this (easy) guide:
https://www.tenforums.com/tutorials/107613-add-remove-ultimate-performance-power-plan-windows-10-a.html

Yes I read this… I tried several times… but no way to reach the high performance menu.
In regedit, under power control … no Csenable available… Don’t know why.

It went fine for me. I copied the DOS command from the post,

opened a DOS window with Administrative Permmisions, copied the command line to it and executed it. I then went to the power menu and it was there ready to tweak.

That was my experience here anyway.

I had seen that article (and others similar to it), but it doesn’t work for me for 2 reasons:

That said, I did find some PS scripts that are “good enough” for my needs. But since I’m just a part-time player who also uses the same laptop for many other tasks, my workaround – mainly disabling Defender, indexing, Windows Update, Google Sync, and networking for the duration of a show – might not be suitable for everyone.

Thank you for tour answers.
Is lasso a good option and what are the best options on it?

Either So_Godly (Sven) or Derek Cook posted a Process Lasso file I used as a starting point (didn’t really change much). I’m on a work trip but when I get back I’ll post the file back if you haven’t found it here.

I successfully enabled Ultimate Power Plan on a laptop. Of course, it won’t work when laptop is battery running. It needs the power cord connected.

I checked if the Ultimate Power Plan is compatible with battery powered laptop.There is no any logic doing that, It’s just curiosity. I used my Huawei Matebook-D, with a 15W AMD Ryzen 5 2500U ( a 2017 not-so-fast processor). Well, I’m surprised. Not only the laptop is running this new power plan, but it does that on Windows 10 version 2004. @Roland_Robertson, don’t ask me why, I just tried and reporting results. I have Cantabile installed (again, just for test, its hard to run a VSTi on this slow PC), the plan is recognized, it seems all okay. I’m writing this post using the slow laptop, and I attached two screenshots. Anyway, any good explanation is welcome 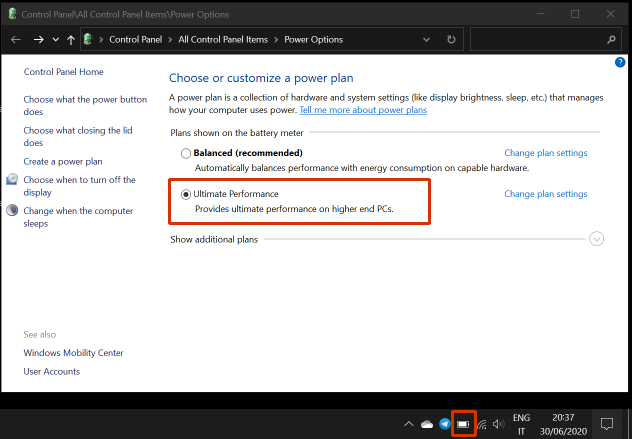 Just a short follow-up on my status on this: I have had a long conversation with Lenovos support team, and did not get anyway on this. Meanwhile, while still waiting to get the input needed before I started automation, I started using the new laptop just to get the Cantabile setup in place - and hey, it worked smoothly. The new I5 was so much better than the i5 in the old laptop, I never got any near having issues with glitches. So right now I am inclined to “if it ain’t broken, don’t fix it” and be happy with the current solution.

However, to be on the safe side, I have made a few shortcuts that I can still use (see details below). So, in short: I only have very few of the power plan options available as it is, and only have the “Balanced” plan available out of the box. Lenovo have their own power settings scheme, but it seems to have no effect on the CPU, so I have decided to ignore it for now. Regarding the power plan, the other power plans are still available, but hidden, so I have made shortcuts to get them kind-of accessible.

Direct on/off
I created two new shortcuts on the desktop, one for High Performance, and one for Balanced:
High performance:

For both shortcuts I set them to start minimized, and I named the shortcuts after what the plans. They can be used to switch power plan by doubleclicking them when needed.

Indirectly, as part of application startup
An example for when I want to start Pianoteq from a shortcut on the desktop, I use this shortcut to start it:

It chooses high performance power plan, starts Pianoteq, and when I closes Pianoteq it selects balanced power plan. I have set the “Start in” folder to be Pianoteq. Substitute the command in the middle with e.g. Cantabile, and it should work (I haven’t tested yet, will try it out soon).