Has anyone seen the need, or perhaps already asked for the ability to put labeled flags on the transport bar?

I use transport bindings for state changes and it would be really helpful to see these change positions coming up while playing or for a visual perspective of what’s happening and when as far as state changes. Or just to mark where verse, chorus, etc… boundaries are in the song.

That would be a useful feature I think.

Kinda like markers.
In reaper you can add functions to it

Exactly. That’s where I got the idea since I use Reaper to tweak tracks and use markers to map out the song. Then when I import to Cantabile I miss them big time!

Can’t that be done on the Timeline?

Tom…@Dave Dore and I have discussed this at length and I believe @Brad has made this possible with the latest version. I use the timeline extensively to monitor where I am in a song. I don’t use a lot of state changes, but for me something simple like say 5 different colors… intro, vs. chorus, bridge and one other for alternate ending or anything of the users choice. I thought since everyone has different colored layouts, why not the ability to highlight the timeline and select a color? A marker would be ok, except for those of us who’s eyes are not what they once were, a quick glance to see a color would be better for me. Dave put together the below for me.

Addendum: I found the communication that Dave and I had and he said as of version 3602 Brad had fixed an issue with the drop-down in this proposal given to me by Dave

step 1 - Create the controller bar buttons to mark the cue points. To start the process right click on the controller bar and select “Add Button”. It will bring up a dialog box like all the ones shown below. In use you will use the first button followed by the second. Locate then mark and name the marker.

button 1 - SET MARKER - fill out the fields as shown below. This button just brings the left hand marker brace to the position you are on the timeline either from playback or dragging the play cursor. 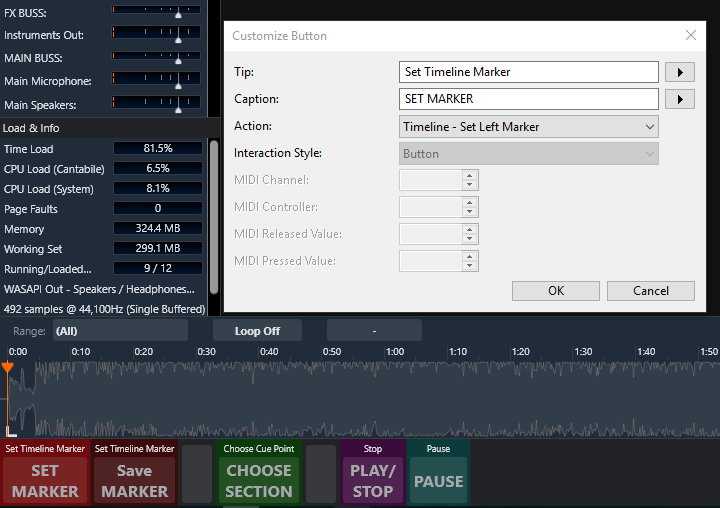 button 2 - Save MARKER - This button brings up a dialog box that allows you to name the marker. Again fill out the fields as shown. 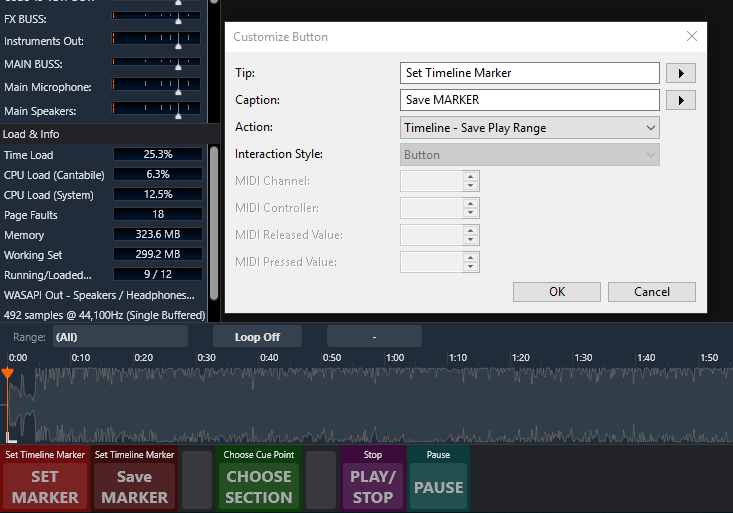 when pressed it will bring up the naming box 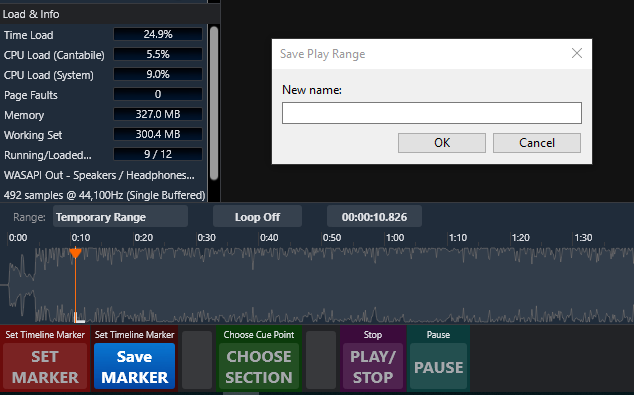 when done it will be placed in the hamburger drop down menu. repeat for all cue points…

Step 2 - Create buttons to call up the markers and play back the parts. This requires the buttons to be made and some bindings added to the background rack.

Button 3 - CHOOSE SECTION - This button opens the drop down menu with the markers but only works if you click on the time line pane before pressing it (if you were pointed to a different pane previous to using the button). When the time line pane is active the edges of the audio graphic data will have a glowing edge to indicate it is active. Again fill out the fields as shown. FWIW you can also do this move by just clicking on the Range menu box. I made the button as a extra convenience so it’s your choice as to whether you want to have it or not. 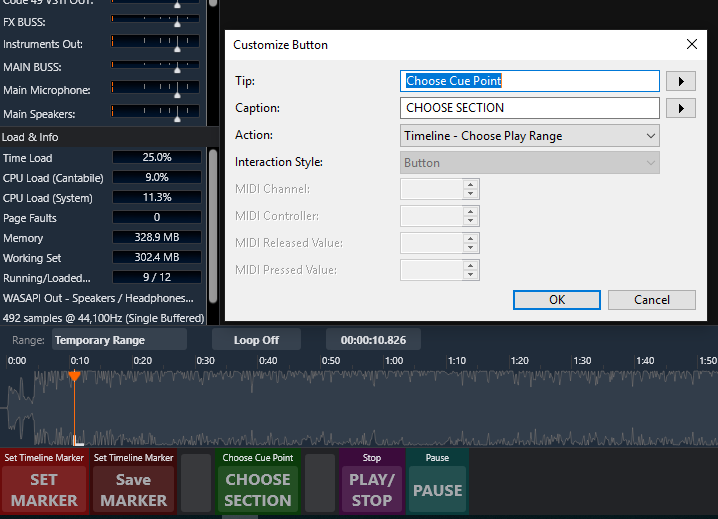 when you click this button it opens the drop down menu. Notice that the waveform has highlighted edges as I described above indicating the timeline pane is the one in focus. 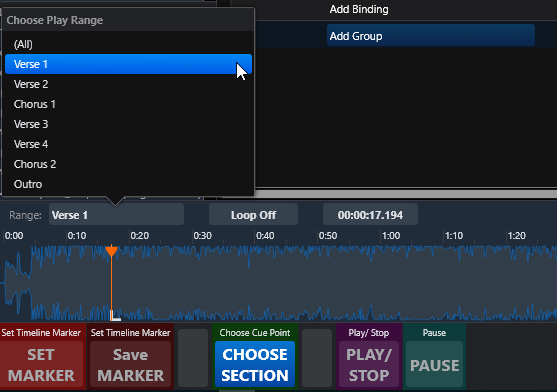 Button 4 - PLAY/STOP - just like it says. it starts playback from the currently selected marker and when pressed a second time it stops the playback and resets back to the beginning of the current marker. Once again fill out the fields as shown. 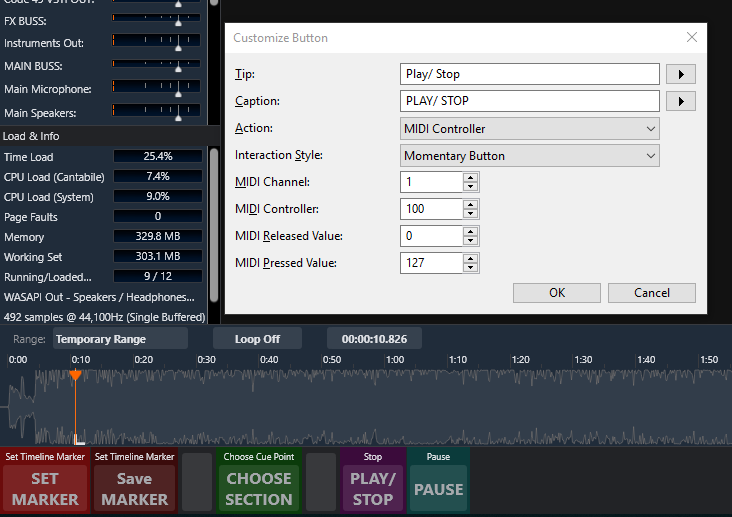 Button 5 - PAUSE - Does what is says it simply pauses the playback. Pressing the Play/Stop button will resume from that point if desired. Again fill out the fields as shown. 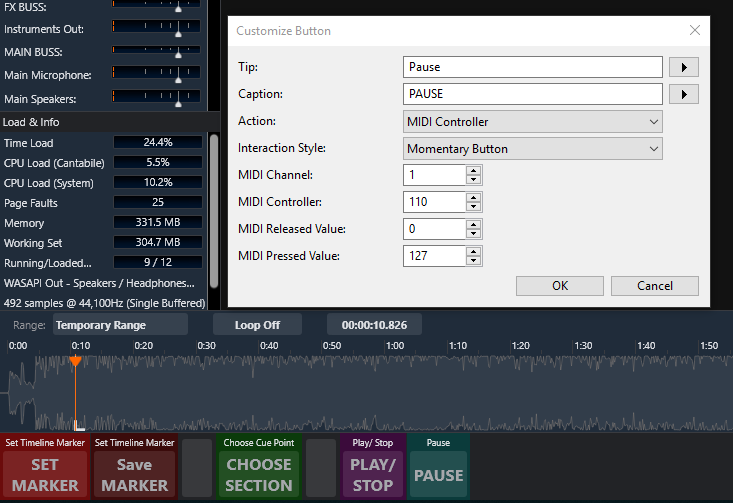 I think that covers it.

This was for something where I would be able to tell on the timeline where the various parts of the song we’re. As usual, Dave has done some brilliant work on this. If this works for you, feel free to use any or all of it

How does the timeline visually indicate the various sections?

Tone…sorry if this was confusing…this allows me to rehearse various sections of a song by going directly to those parts, as opposed to simply guessing what section of the waveform it is? I am in a duo and we use tracks we created and it has always been a problem trying to “take it from the chorus” and actually guessing correctly where that chorus is. This enables me to do directly to the part I need. I’m still hoping that @Brad will be able to fulfill mine and obviously yours and perhaps many others to enable either a visual marker or the ability to change the color of the timeline, much like the option that enables custom displays

I do plan to improve this area with markers etc on the timeline however not on the current timeline implementation. There are a lot of changes/improvements requested in this area and these will probably all be consolidated and implemented as an entire rewrite of the timeline panel.

I hope it’s sooner rather than later, but of course, everyone has their pet priorities

Will look forward to seeing this in an upcoming release. We all have confidence that it will be done well and that’s what matters most.

Interesting. I’ve tried it today and it’s a good way to prepare rehearsals.
Coloring the media file is a good idea too

for a more direct visual work.

daveurope…I know nothing about coding, so I will leave that to @Brad. It seems to me though that if the display can feature many different colors, bringing those attributes to the timeline should not be that difficult. How @Brad manages to do all this and have a wife and kids, is beyond me. I picture him leaning over the keyboard with Red Bull in hand @ 3 am furiously coding.

I picture him leaning over the keyboard with Red Bull in hand @ 3 am furiously coding.

I don’t know how he does it either. I used to code Fortran in the early 80’s, but you could picture me, leaning over a keyboard with a toddy in my hand @3 AM furiously drinking.

You’re right! That’s called passion… I surely pass too much time on music…
Brad has all my respect. He simplifies pour lives🤩
But complicates his one.