My opinion.
Shown all the time.
Main window.
Anywhere a meter exists.
Resizable, but able to be really large.
Doesn’t matter if vertical or horizontal.

Colored with some tags (reference to 0 dB)

I’d love to see it

Would be great if c3 had functions like floating menus like in reaper. So we could arrange our way.

That k meter comes close with the functions, except the high CPU hit.
https://images.app.goo.gl/9uwLXJ13WKt4sX7n6

Blue Cat Audio puts them in very thin full window height strips (left side input, right side output) that look like they are part of the VST’s frame. I’m not suggesting this as an answer for C3 - just pointing out one way a VU meter can not take up much room but be easy to read.

Any screenshot of that?

Blue Cat Audio puts them in very thin full window height strips (left side input, right side output) that look like they are part of the VST’s frame. I’m not suggesting this as an answer for C3 - just pointing out one way a VU meter can not take up much room but be easy to read.

That is true. Love my Blue Cat DP Meter Pro. You can adjust the transparency to see other things on the screen.

Most flexible would be another panel I think, so you can have different visibility of the metering in live and non-live modes, independent of your choice of other panels.

I quite like the idea of tall meters in a hideable panel at one side (maybe the right, to avoid complications with the current left panel).

I don’t personally think I’d need them where all level meters exist, just the main outputs (which of course aren’t necessarily just stereo L/R for some of us). Vertical would be my preference, and non-resizeable is fine as long as they’re big enough and can be independently hidden. Prefer docked in a panel rather than floating, so they don’t start obscuring show notes and so on.

It would also be good to have them post song output gain, which I don’t believe is currently possible with metering plugins residing in the song, which makes it harder to do levelling across songs.

A “nice to have” would be the ability to add extra “custom” meters that you can route audio to from anywhere in the song structure.

Maybe they could be just some pixels wide? So you can add several next to each other for each output?
After all you only need a small visible bar that shows you the info? Can be with rms level and red dot that’s shows when you got into the red

Maybe they could be just some pixels wide?

Maybe - but they’d need to be wide enough so that if you had multiple outputs, you can easily identify which bar belongs to which output.

Any screenshot of that? 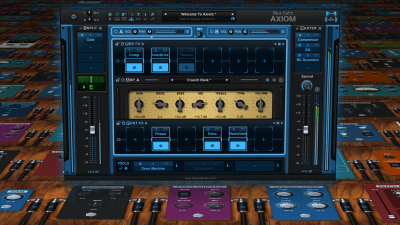 You mean something like these meters in the left of in cantabile? Would be handy indeed.
Although for me the controller bar seems a better place horizontal.

You mean something like these meters in the left of in cantabile?

My preference would be wider, so when you have more outputs (I have 8) you can tell which is which. Also proper dB markings.

One instance per track (low CPU load), Group function, Can select any instance from displayed instance and has a limiter if required.

Did you know that cantabile gives you the audio meter as binding source (though converts it to midi CC)? So if cantabile doesn’t give what you are looking for you might can use this to solve it for you.

Where is this? Is it just the main out, or can you bind to each port?

Is there a MIDI VU app on the ipad or other tablet? Would be nice to offload this onto another screen using rtpMIDI or OSC.

Or could it be implemented as a web page from the C3 webserver?

Just create a binding from a rack and take “audio level” as source. That’s it.

You could use TouchOSC or so. Maybe Chameleon is able to do it:
https://hi.computer/chameleon/

However you do it, it would be great to have a peak hold/decay function, like Sonar and most other DAWs, where the peak leaves a line for a second or so, so you have enough time to see the value of the actual peak. If it’s variable all the better, but I’d be happy with a standard 1 sec decay!

BTW, I’ve been “normalizing” guitar tones for years to ensure the FOH guy has predictable levels with my huge library of patches. And in some bands there is no FOH guy. Whether on an amp with a multi efx pedal, or in C3 or amp sims, you have to use a meter… your ears don’t remember values, meters do! Just me 2 cents. Thanks!
Tom

Trying to add some insight in this thread:
@brad, if you go with the VU Meter, please make it a possibility to adjust dbFS vs dbVU with various scales.
Just like in https://www.youtube.com/watch?v=h3VK_ENm3ig

This is the “pro” feature of a VU Meter that makes it really usable for me: once properly set up, it’s just a matter of seeing if I’m in the red, plus, I have a sense of how much “headroom” I still have.

An optional peak indicator is always nice, too.

Heartily agree - an integrated VU meter would make life a bit easier - currently, I’m fiddling with metering plugins in my master rack, but it’s all a bit messy.

One caveat though: even though I calibrate most of my patches using VU meters (I also use LUFS meters to address “perceived loudness” somewhat), there’s still no substitute for a final check “by ear”, ideally against a standardized playback. Some sounds just cut through a mix a lot better than others of the same measured loudness - typical example being a Rhodes vs. an acoustic piano, or clean guitar vs. fully distorted madness. It’s mostly about overtones, but also about typical playing style.

So even with good metering, your ears should be the final judge.

Definitely agree, Torsten… and the meters just help us get to close, and to quickly double check. I use a meter most when building several new songs at once… it’s jsut faster to get it in the ballpark. And your point about the mix is especially true of mids… i.e. on guitar boost the mid a bit and it cuts through the mix, although your meter may not show the boost much. RMS metering is another option, too… but yes, the human ear is the best judge in the end!
Tom