I have a large number of backing tracks, all recorded to clicks, that mostly stay cleanly in time with Cantabile’s bar/beat counter. However…

The backing tracks are not set to begin on a bar start, so although they remain in time with the counter, the start of a bar does not match.

I really don’t want to have to go back to creating all the backing tracks again to align them to a bar start, so is there any way I can manage things within Cantabile to line them up?

A ‘reset counter on crossing point’ would be a useful feature. Or maybe a per-file bar/beat counter offset in the Media Player?

Given that my songs often have time-signature (and tempo) changes, a ‘change tempo/time signature’ on crossing point binding would also be a big help.

Or is there a way of solving this of which I’m not yet aware?

…and as soon as I ask the question I come up with an idea.

I set the Media Player as ‘Slave’, rather than ‘Master’ and I bind the Media Player to begin playback at any Transport crossing point I like. That gives me the opportunity to line up playback. It means I have a bit of a pause at the start. It also screws up when I jump around in the Timeline, which knocks my Timeline Song State changes out of kilter.

And it doesn’t solve variable tempo/time signature, so I’m still open to ideas.

I think there are ways to do it but I am not quite sure about the nature of your backing tracks regarding what condition they are now. Is there extra dead time at the front end of the files before they hit their first click aligned beat from when they were recorded? If so I think there is a way …

First you could use the left hand range bracket in the media player timeline to align the track start(s) so the Bar aligns with the transport start bar. 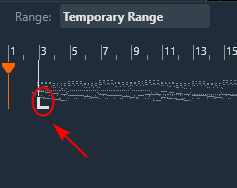 now stop takes us to the range bracket position 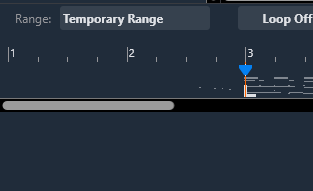 Not sure if this fits your requirements though so I only hope it might help.

Thanks for the thoughts - similar to some of my own thoughts.

My backing tracks are just stereo audio files (not MIDI) that run from beginning to end. I have Song State changes bound to Timeline points - these change patches, mix, FX sends and other elements for me.

The problem with starting Media Player from Transport is that it knocks my Timeline Song State changes out of time when I want to jump through the backing in practice. That’s not really going to work for me.

Putting the Media Player back to ‘Master’ I tried moving the start point of playback on the Timeline, but it makes no difference, since it is not the Media file that defines the starting point reference for the Metronome - it is the Transport.

So I’m still stuck with this one. It’s not a huge deal - just a niggle.

Interesting. I have the same difficulties… my export audio files are not perfectly in sync with the metronome. And it depends on the daw I use. From cubase it’s in sync… in FL studio it is not perfect… why? I didn’t find…

It would be great to move the audio file directly in the mediafile part and align then directly.

It could be a great option to edit audio files a bit directly in cantabile…
Maybe it’s possible ?

Just my two penneth worth, but it may be too much work if you have so many tracks…

For my backing tracks/clicks, I also export a MIDI file from my DAW (which also has the note triggers for DMXIX cues and chords for my TC-HELICON voice processor), and I have that as the master track, which is then driving the tempo/timesig of the master transport - essential in songs with mixed time signatures.

All audio tracks are slaved to that.

Yeah, it’s not really an option. The tracks and backing tracks are not of my own making - and going back to try to create something all over again would not get a good reception.

I can live with it. I think that being able to mess with the bar/beat display in some form would be useful, maybe as binding targets - Counter Reset (or set to any value), Time Sig, Tempo?

But in no way a priority!